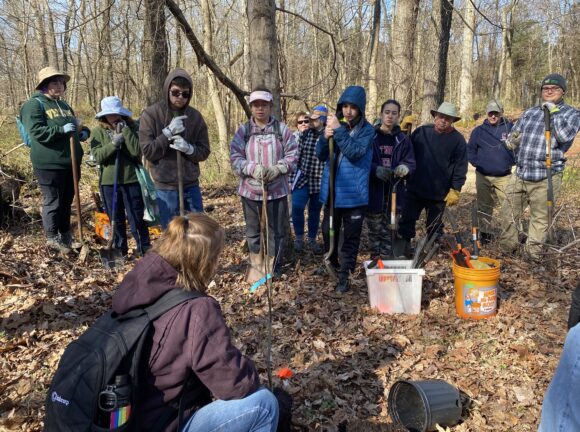 Volunteer Days during the month of April at Hutcheson Memorial Forest Center (HMFC), located off Amwell Road in Somerset County, had a successful start with 20 volunteers from Rutgers, nearby community colleges and local residents. Volunteers planted more than 130 native trees in nine canopy gaps located throughout the enclosed old-growth forest known as Mettler’s Woods. Planting will continue in April, with two more volunteer days being held on April 9 and 16. 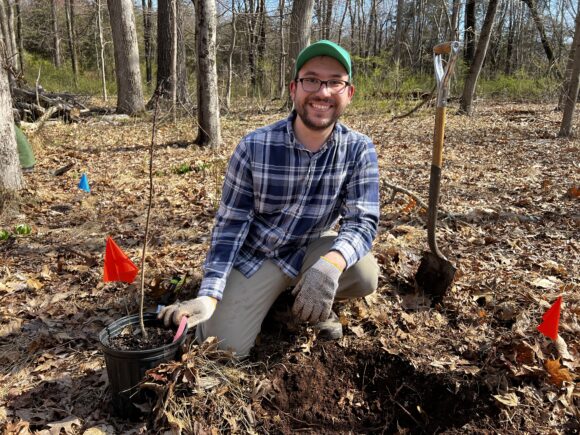 Volunteers are a key part of the strategies being employed to aid in the restoration of forest canopy gaps in this historic forest, which is listed on the National Park Registry of Natural Landmarks. Protected and administered by Rutgers, HMFC consists of the 26 ha Mettler’s Woods, the primeval, mixed oak forest that is one of the last uncut stands of this sort of forest in the U.S.

Because of overabundant deer population and the dominance of invasive plant species, the next generation of trees is at risk, explained Myla Aronson, assistant professor in the Department of Ecology, Evolution, and Natural Resources, and director of HMFC.

“The goals of this project are to develop restoration strategies that facilitate tree growth in forest gaps while also reducing invasive plant species,” said Aronson.

Samantha Gigliotti, doctoral student in the Ecology and Evolution graduate program at Rutgers, is a key part of the research team involved in the restoration efforts.

“The lack of tree seedlings and saplings in Northeastern urban and suburban forests are a major concern for forestry professionals, managers, landowners and the community at large, and threaten the future of our forests,” said Gigliotti.

The research related to the restoration efforts at HMFC is supported by the McIntire-Stennis Cooperative Forestry Program and the Aronson Lab for Urban Ecological Studies. To participate in upcoming Volunteer Days at HMFC, contact Samantha Gigliotti.