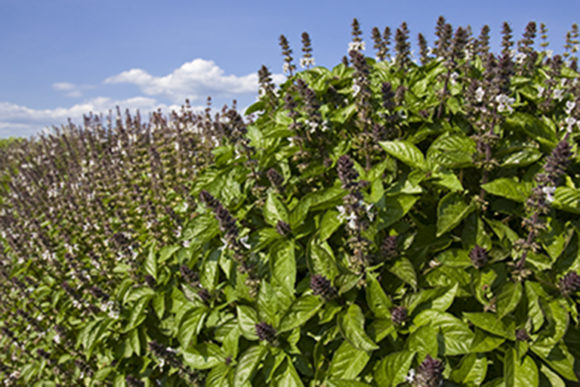 Sweet Basil has long been a wildly popular herb, used in a variety of cuisines around the world.

“We grow a lot of basil in New Jersey,” said James Simon, professor of plant biology in the School of Environmental and Biological Sciences at Rutgers University-New Brunswick. “But back in 2010, we started to see a new disease, called downy mildew, showing up on basil plants. It was especially bad in Cumberland County. While downy mildew is a common disease that causes significant damage on many other fruits and vegetables, there was never a strain that attacked basil before.” 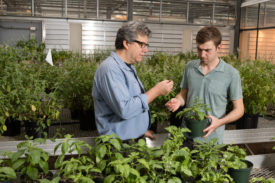 Downy mildew attacks the underside of the leaves and renders them inedible. In Florida, which has a year-round growing season, basil crops had already been devastated by the disease. The only known defenses were chemicals to treat field crops and manipulating the humidity in greenhouses, which were both expensive and relatively ineffective methods. Simon and his research partners – Andy Wyenandt, extension specialist in vegetable pathology, and graduate student Robert Pyne – wanted to find a genetic alternative to chemicals as a way to resist the disease.

They surveyed existing varieties of sweet basil, looking for ones that were resistant to the disease, and struck out. “They were all susceptible,” Simon said.

Then they examined “exotic” basils, or other species of basil grown overseas that weren’t widely used commercially except for ornamental purposes. They found some that were immune to downy mildew, but when they tried to cross them with sweet basil, Simon and his colleagues found the crosses were difficult and progeny sterile.

James Simon led the research – a marathon, not a sprint – to produce varieties of sweet basil that tasted great and resisted disease.

“Eventually, we found one that didn’t look, smell or grow like a basil,” Simon said. “But it was a basil. And it was resistant.” 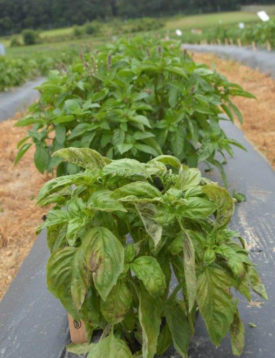 “Resistant” is a key word here, Simon said. A plant that’s immune would be wonderful, but he and his partners had been down that road and found it costly and unproductive. In the initial stage, commercial growers needed resistance. A resistant plant, if it turned out to be commercially viable, might occasionally get some downy mildew while still producing a marketable crop. Simon and his partners decided to take resistance and run with it.

It turned out to be a marathon, not a sprint. “We made thousands of crosses,” he said. “We developed varieties that had resistance but originally didn’t have the aroma and/or flavor or that particular look we were after. Or, we got some that had flavor but lacked resistance to the disease.”

Finally, their patience resulted in the new varieties now available – Rutgers Obsession DMR (downy mildew resistant), Devotion DMR, Passion DMR and Thunderstruck DMR. While all are high yielding and robust, each is a bit different in their appearance and created to fill  different market slots and needs.

Dennis DalPonte, a farmer in Richland, New Jersey, worked with Simon on some of the trials. He said the experimental crosses really stood out in a field. He has planted some Rutgers Devotion in his three acres of basil and looks forward to a good harvest. “I’ve been through some of the trials, and the Devotion was like a soldier standing up, waiting for the enemy, when the others were dying (from downy mildew),” DalPonte said. “It looks like Devotion fills our needs. It’s the real deal.”

Read more about the development of the breeding program for basil downy mildew resistant varieties at NJAES.