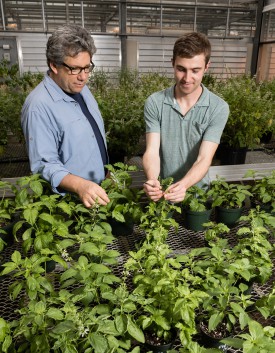 Professor James E. Simon and plant breeding Ph.D. student Rob Pyne in the basil greenhouse. After years of crosses and evaluations in fields and greenhouse, they are well down the path to developing a sweet basil variety resistant to the destructive downy mildew pathogen. Photo by Jack Rabin.

For the past seven years, a familiar scenario has been playing out on farms and in gardens across the U.S. A healthy, fragrant crop of sweet basil begins to display yellowing leaves. Upon closer inspection, the undersides of the leaves show signs of a menacing grayish sporulation. It is only a matter of time before the basil plant and others in proximity succumb to this new disease of basil downy mildew.

Basil downy mildew favors heat and humidity, and by mid to late summer, when there is enough inoculum, the disease is widespread in our region. According to Extension Specialist in Vegetable Pathology Andy Wyenandt at Rutgers New Jersey Agricultural Experiment Station, basil downy mildew can’t overwinter in our region and can only survive the winter in southern Florida and Texas, where it is a year-round threat. The rapid spread to northern states during the growing season is through the planting of infested seed, by importing southern-grown plant material, or via weather patterns coming from southern states.

While plant pathologists have tracked its spread across the U.S. since it was first identified in Florida in 2007, a few years prior, basil downy mildew made its way across Europe after it was initially reported in 2001 in Switzerland. The rapid spread of the disease is intriguing in light of the fact that for decades it was never found beyond the area of its original detection in Uganda in 1933. It has been speculated that the pathogen may have evolved into a more aggressive form and its rapid spread was enabled by seed- and air-borne spore dispersal. The arrival of basil downy mildew in the U.S. has left growers and gardeners flabbergasted and with few options to save their plants. It has required a coordinated effort by agricultural scientists to develop a strategy necessary for battling this new threat, which affects 100% of the basil crop and leading culinary herb grown in the U.S. Once basil plants become infected and develop symptoms of downy mildew, they are no longer marketable as a fresh product. Without adequate control options and genetic resistance, basil downy mildew has the potential to destroy basil production in the eastern U.S. and beyond. Currently, sweet basil growers rely on multiple applications of a few commercial available fungicides currently registered to produce a marketable crop, while treatment options for organic growers are even more limited. 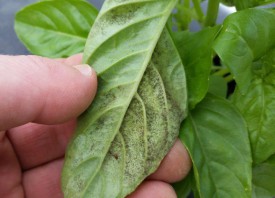 Downy mildew sporulation on the underside of basil leaf.

As with many agricultural disease threats, land-grant university researchers rely on a network of colleagues from surrounding states and the region to provide a coordinated response to a major disease outbreak. Wide-scale monitoring of the disease helps plant pathologists determine the timing and location of basil downy mildew threats. In the case of basil downy mildew, this also meant quickly determining what fungicides and cultural practices would best keep the disease at bay and prevent crop loss. Most importantly, it also meant searching for a downy mildew resistant sweet basil.

In 2011 a team of researchers from the University of Massachusetts, Cornell University, University of Florida, and Rutgers University assembled to develop a strategy to manage basil downy mildew in the humid conditions of the eastern seaboard, where the disease is most apt to thrive. Partner universities are focusing on chemical and cultural controls for the disease, as well as the molecular diagnostic markers. Rutgers researchers have the crucial role of developing new sweet basil varieties that are resistant to downy mildew. Rutgers currently has the largest basil breeding program in the U.S. Outside of Rutgers, other basil breeding efforts are being conducted in Israel and Europe – locations with different disease pressure conditions than the eastern U.S.

Rutgers Professor of New-Use Agriculture Jim Simon has been collecting basils from around the world since 1986 and in the fifteen years he’s been at Rutgers, has expanded it into an extensive collection. Simon began breeding basil in 1990, first attempting to understand the genetics of aroma formation and the development of lines rich in specific aroma compounds. His venture into breeding for disease resistance began with Fusarium wilt resistance, which was a major problem for commercial basil growers in the 1990s, and he and others developed large leaf Italian types of open-pollinated Fusarium wilt resistant sweet basil. “About five years ago, we turned our attention to downy mildew as this new disease came into New Jersey for the first time and really began to devastate our commercial basil crop where growers were negatively impacted,” states Simon. “In concert with our state vegetable pathologist, Andy Wyenandt, and with encouragement of some of our lead basil farmers like Dennis Dalponte and other Rutgers vegetable specialists, we first sought to address this problem by identifying basils from any species that exhibited tolerance or resistance.” 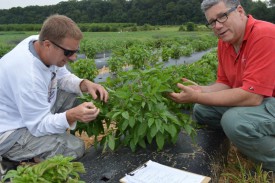 Once resistance was identified in the other basil types, Simon and Pyne had to make hundreds of crosses to get the desired traits of sweet basil along with downy mildew resistance. This fine tuning is a craft in itself. While developing a resistant basil is an accomplishment, Pyne points out “it has no commercial value unless it looks and tastes like a true sweet basil.” The team does their own informal quality assessments and they also provide samples to New Jersey and Florida basil growers to get important feedback. The breeding work is tedious, and promising varieties have to undergo further testing to see if they’ll hold up under extremely high disease pressure. In a university greenhouse screening room which was built to rapidly expose thousands of basils to this disease, the breeding lines are kept wet all day long in disease chambers. By making conditions ideal for basil downy mildew development, Pyne says, “basically, we make that room into Florida.”

A lot is riding on the success of the $1.8 million dollar USDA-Specialty Crop Research Initiative funded grant awarded to Simon and others in 2011. Sweet basil is the most commercially important annual culinary herb crop grown in the U.S. and one of the most popular garden herbs. Commercially, basil is grown for culinary use for both fresh and dry consumption and also to a limited extent is a commercial source of essential oil and oleoresin that are used in perfumes, food flavors, and aromatherapy products. 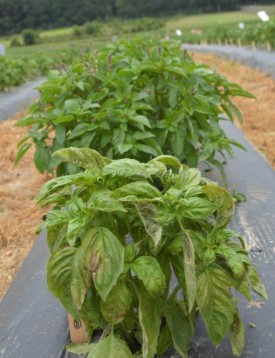 A non-resistant sweet basil (foreground) shows signs of downy mildew, while the plant bred for resistance next to it, is healthy.

Fortunately, several downy mildew resistant sweet basils have emerged from all this work that are currently undergoing their last rounds of rigorous testing. Simon states, “It has taken quite an effort and it is still underway. We predict that the first resistant strain will be released next year, and a series of resistant sweet basils of different phenotypes (leaf shape and size) the year after. Once we release the line, it will be licensed to the commercial industry and then it likely would take another one to two years before ample seed stock is produced and made available.” Simon adds that “plant breeding is an art, science and craft- and with basil we focus not just on disease resistance, but also breed for high yield and field performance, aroma, taste and the plant’s visual appearance.” The team is excited about the basil varieties they have developed and invite growers, gardeners and others to visit the research plots and see the new strains. The varieties will be available for tasting on August 26 at the Great Tomato Tasting at Rutgers Snyder Research Farm in Pittstown, NJ.