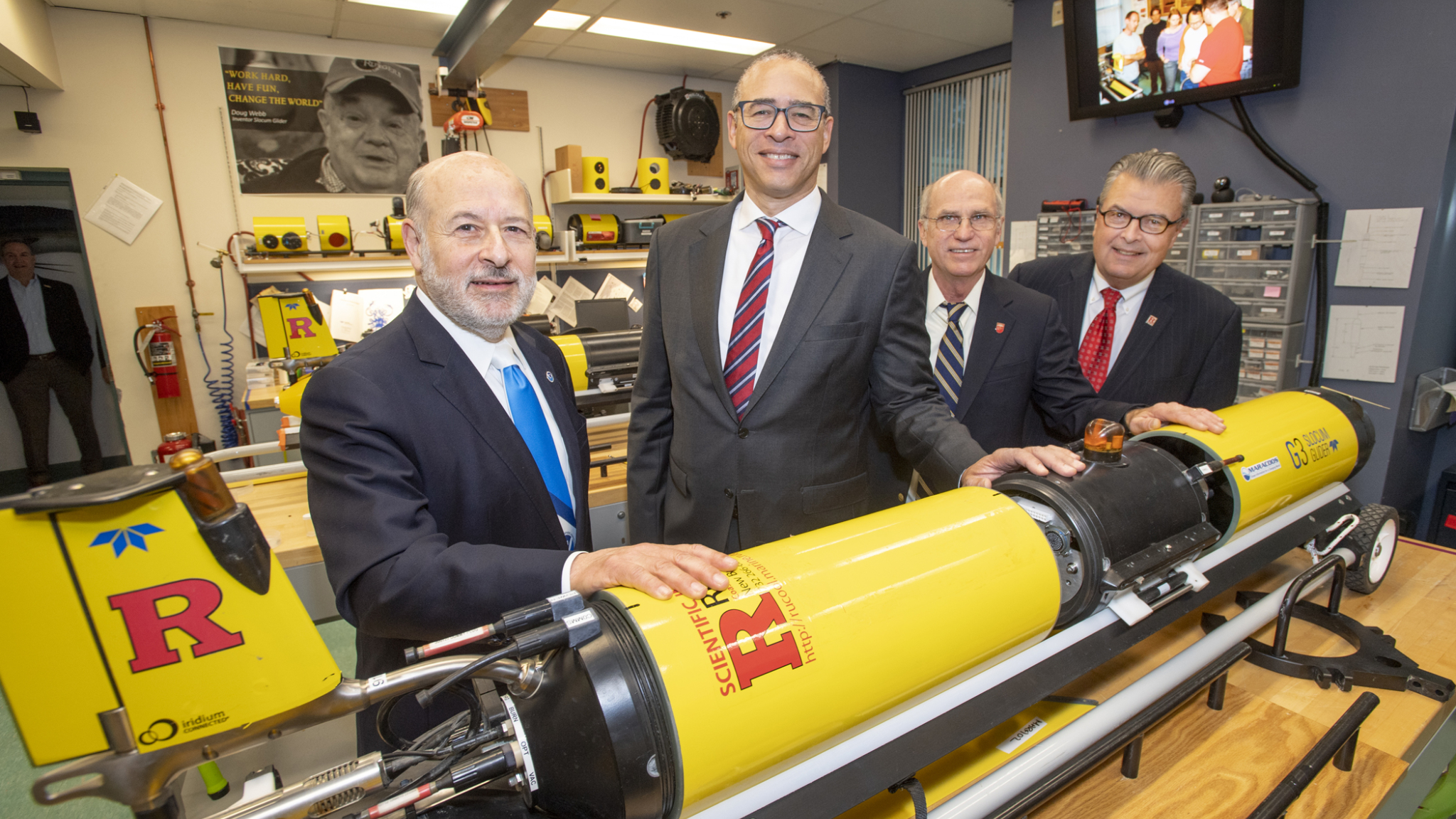 For 30 years, Rutgers’ Center for Ocean Observing Leadership (RUCOOL) has taken the lead in pioneering research that has changed our understanding of the oceans and the way information is collected.

National Oceanic and Atmospheric Administration (NOAA) Administrator Rick Spinrad joined Rutgers President Jonathan Holloway and marine and coastal science researchers and students last week to celebrate the accomplishments of RUCOOL and to look back at the research gains made since Superstorm Sandy 10 years ago.

Working with government, industry, and academic partners, RUCOOL guides underwater gliders that provide observational data – combined with data gathered from planes that fly into hurricanes and the Argo fleet of robotic instruments that drift with the ocean currents and move between the surface and a mid-water level – to deliver more accurate views of ocean activity in hurricane models. The resulting models lead to better hurricane monitoring by NOAA and forecasting by the National Weather Service.

“As the land grant institution of New Jersey, Rutgers recognizes our key role in equipping our local communities and all of our 21 counties with the research and information needed to prepare for the change in climate,” President Holloway said. He congratulated the RUCOOL team for three decades of service to the state, country, and world last week at the Department of Marine and Coastal Sciences in the School of Environmental and Biological Sciences at Rutgers-New Brunswick.

Spinrad recalled early discussions decades ago with Glenn and Schofield about the idea of sending a glider across the Atlantic Ocean to gather needed data and information. Spinrad and Rutgers alumnus Craig McLean, recently retired as assistant administrator of NOAA Research, supported Rutgers researchers as they developed the glider technology with Teledyne Webb Research.

Today, Rutgers is the third-largest operator of ocean gliders, behind only the National Science Foundation and the U.S. Navy, and the technology deployed is more important than ever.

“Hurricane Harvey dumped five feet of rain on the Houston area. Ian dumped two feet of rain in Florida. These are different storms,” Spinrad said, noting the increasing intensity of hurricanes. “They’re massive storms. They’re slow. They’re powerful. Our ability to get the observations, build the models and make the predictions is becoming even more critical.” 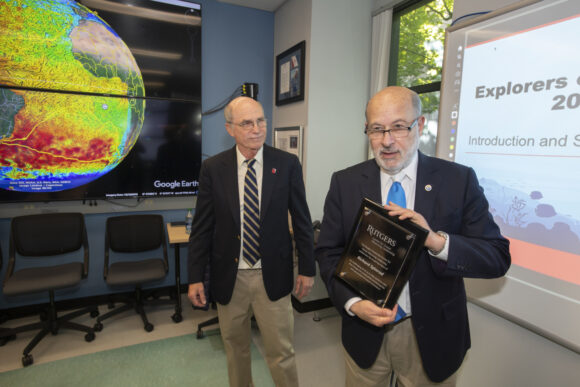 While other agencies were pulling observational technology out of the ocean as Sandy approached in October 2012, Rutgers left its glider submerged with the support of NOAA and other partners. As a result, researchers “got tremendous data from that storm,” Glenn recalled before a gathering of students, faculty, NOAA and Teledyne Webb Research representatives.

“We were looking for the cold pool of water that protected us during Hurricane Irene,” he said, noting that the storm slowed and fizzled as it made landfall and instead dropped heavy rains inland. “As Sandy was coming ashore, the cold pool wasn’t there. We had no protection. It was coming in strong because there was no cold water to cool it down.”

“We had information, and we couldn’t share it,” Glenn said.

That changed in the aftermath of Sandy, when funding through NOAA allowed Rutgers to collaborate with the agency, the National Weather Service and Teledyne to deploy more gliders and put a system in place to distribute the data and findings to help make timely, better forecasts.

“We accomplished our goal,” Glenn said. “The gliders are out there and are gathering the information and feeding it into the weather service, and they are improving the forecasts.” 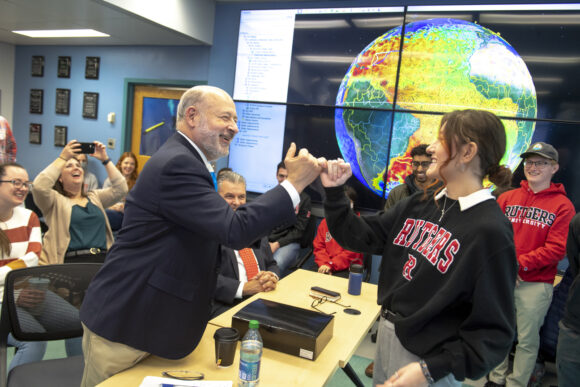 Next Challenge: Circumnavigating the world’s oceans

As part of the United Nations Decade of Ocean Science for Sustainable Development, Rutgers marine science undergraduate students are working with RUCOOL to deploy the newest Teledyne glider to circumnavigate the world’s oceans for the first time to expand the boundaries of observation and build an ocean of data.

“We also want to inspire communities across the world to participate in this global conversation about how we can expand ocean literacy, education and policy in order to create an inclusive and equitable ocean for all,” said Salvatore Fricano, a fourth-year biological oceanography student.

Called the Sentinel mission, it is one example of the experiential learning students at all levels in marine and coastal sciences participate in.

“Students are the heart of the activities in this building, across labs, and they anchor some of the exciting work underway, like crossing ocean basins, and developing sensor webs that don’t need humans in the loop,” said Schofield.

Asked by Spinrad how he would describe to an uncle at Thanksgiving the work he is doing at Rutgers, Fricano said:

“I would tell him that we’re a part of a big community of scientists who want to see the future of our world protected and we’re going to do that by looking at the oceans, because no matter where you live or where you are or what you do, the ocean impacts you. And we’re going to expand on that and make a better future for all of us.”