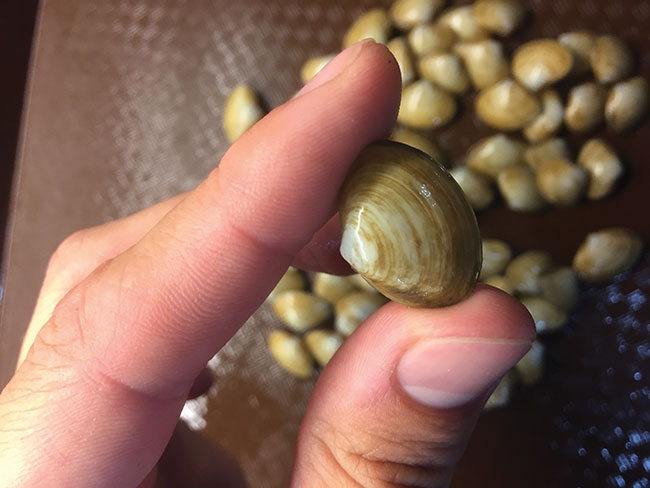 Editor’s note: Michael Acquafredda (GSNB’19) earned a doctoral degree in Ecology and Evolution in the Rutgers School of Graduate Studies

A study that provides technical aspects of Atlantic surfclam (Spisula solidissima) husbandry supports the feasibility for the culture of the species in the U.S. Northeast region. 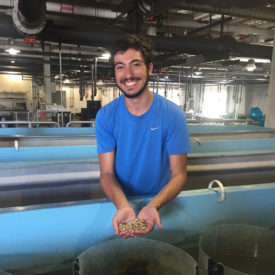 Michael Acquafredda cleans and cares for juvenile surfclams in an upweller silo at Rutgers Aquaculture Innovation Center in Cape May, NJ.

Surfclam exhibits many features that make it amenable to aquaculture, particularly in the region.

“Surfclams grow rapidly, with a spawn-to-sale production cycle as short as 12 to 18 months. Surfclams are native to the region and are generally recognizable to the public,” Acquafredda said, before adding its consumer selling point. “Importantly, farmed surfclams have a sweet, buttery flavour, making them a delicious seafood choice.”

The entire research was conducted at the Rutgers University Haskin Shellfish Research Laboratory and Aquaculture Innovation Center. It demonstrated that multiple rearing methods can effectively produce commercial-scale quantities of surfclam.

“Our results show that during the early nursery phase (shell length = 0.4–2.7 mm), a variety of methods, including downwellers and bell-siphon systems, can be used to successfully rear surfclams.

“However, once juvenile clams grow larger to enter the late nursery phase (shell length = 1.1–18.0 mm), the upweller system becomes the optimal gear type. In our study, upwellers significantly outperformed shallow raceway systems, and we found no advantage of rearing surfclam seed in sediment,” he explained.

The use of multiple rearing methods brings down the cost. While downweller can provide clams with consistent and optimal environmental conditions, maintaining highly controlled conditions can be complex and costly, especially for small enterprises.

“Sufficient early juvenile surfclam growth and survival can also be achieved using the flow-through bell siphon method. Once clams are large enough and enter the late nursery phase, it is recommended that they be transferred from either method to a flow-through upwelling system.

He stressed the importance of careful acclimatization of surfclam when transferring this from controlled to flow-through condition in order to sustain growth.

“This can be accomplished by slowly adjusting the water temperature to match the raw seawater temperature at a rate of 1 C per day and by closely monitoring food consumption before and immediately following the transition,” he said.