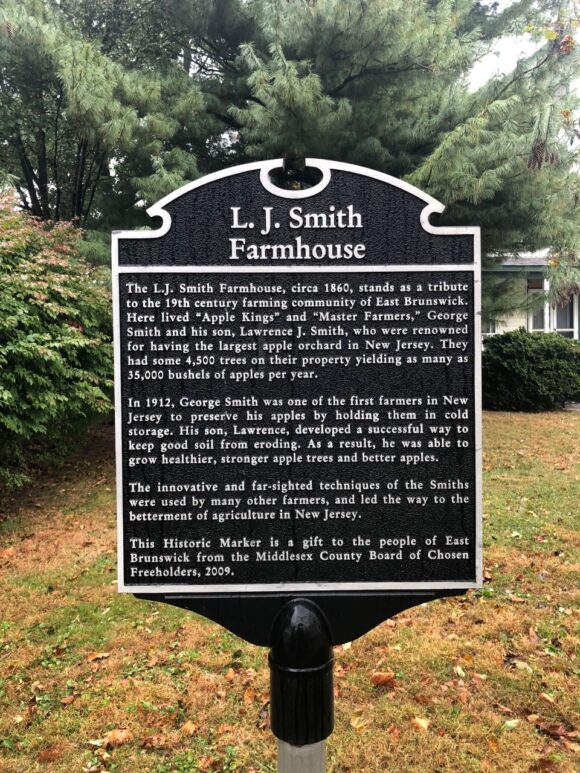 Rutgers alum David Moskowitz (GSNB ‘16), a naturalist who completed his doctoral degree in entomology at the School of Environmental and Biological Sciences, is a broadly trained ecologist and senior vice president for EcolSciences, Inc. When Moskowitz, who is a resident of East Brunswick NJ, came across historic discarded records from a local New Jersey farm, he recognized the opportunity to peak through a window of time and analyze the farm’s practices and role as a reflection of the time it was in operation. Along with EcolSciences colleagues senior project manager Michael Levinson and fellow alum (Cook 2008) who received his B.S. in environmental science from Rutgers, and environmental scientist Evie McMenamin, the three examined the records and published a study, View of Historical Pesticide Purchases for a New Jersey Apple Orchard from 1931-1936 and 1943-1945 with Notes on Remnant “Legacy” Pesticide Concentrations in Soil (rutgers.edu). The article is published in New Jersey Studies: An Interdisciplinary Journal, sponsored by Monmouth University, Rutgers University Libraries and the New Jersey Historical Commission.

The article provides an insight to the state of the industry at the time, but also capture its integration in New Jersey agriculture and its involvement with the New Jersey Agricultural Experiment Station. Among the examples, the paper states:

“For most of the 20th century (1905-1998), the Smith Farm in East Brunswick, NJ was well-known. At its peak it was the largest apple orchard in the state. The father and son proprietors, George and Lawrence Smith, were innovators, pioneering new and improved orchard management and apple growing techniques, and were dubbed “Apple Kings” and “Master Farmers” for their work.

In 1998, the pesticide purchase records at the farm from1931-1936 and 1943-1945 were serendipitously rescued from a dumpster. The receipts and other materials provide a historical glimpse of two time periods marked by rapid and significant changes in agricultural pesticides from largely naturally derived, to synthetic, a legacy of World War II chemical innovation.

As cutting-edge orchardists, the Smith’s employed and experimented with the most up to date pest control methods of their time and their pesticide purchases reflect that. However, many of the chemicals used at the farm remain in soils for long periods after application. Soil sampling in 1998 identified extensive contamination from these “legacy” pesticides, an issue plaguing orchards across the United States.

In 1999, with the oversight of the New Jersey Department of Environmental Protection, the contaminated orchard soils were remediated as part of a process to develop the property for housing. The orchard is long gone now, and in its place there is a housing development known as Apple Ridge Estates (with streets named after apple varieties). The history of the pesticide purchases at the farm may provide an important lesson about how one generation’s innovation may be seen as a subsequent generation’s curse.”

The proximity of the farm to the college allowed the Smiths to share state of the art strategies they implemented with other farmers. According to the article, “George Smith was apparently a master orchardist and as his orchard flourished, he produced more fruit that he could sell, losing a large portion of the crop to spoilage. In 1911, he decided to build a cold storage building that would use ice to keep the fruit cold until it could be sold. The building was completed in 1912 and was the first fruit cold storage building in New Jersey and one of only a few in the United States. The cold storage greatly extended the life of the fruit, allowing for sales at higher prices in the winter when fresh fruit was scarce. Soon after it was constructed, the cold storage building was used as an educational tool by the nearby State Agricultural College. The college had a 100-acre experimental farm in New Brunswick that ultimately would become the present-day George H. Cook campus and students attending the school would visit the Smith Farm cold storage building.”

Like many New Jersey farmers, the Smith farm took advantage of NJAES short courses. The authors state, “In 1919, Lawrence Smith was twenty-one and was encouraged by his father to enroll in the State Agricultural College fruit course. He attended the course between 1919 and 1920. Lawrence Smith noted the importance of the short course for insect and disease control and pesticide spraying in 1923: The Short Courses have given me training of inestimable value in farm management, insect and disease control, and spraying and pruning. Furthermore, through the contacts I have maintained with my Instructors since leaving school I am keeping our methods right up-to-date.”

Read the full article at View of Historical Pesticide Purchases for a New Jersey Apple Orchard from 1931-1936 and 1943-1945 with Notes on Remnant “Legacy” Pesticide Concentrations in Soil (rutgers.edu).