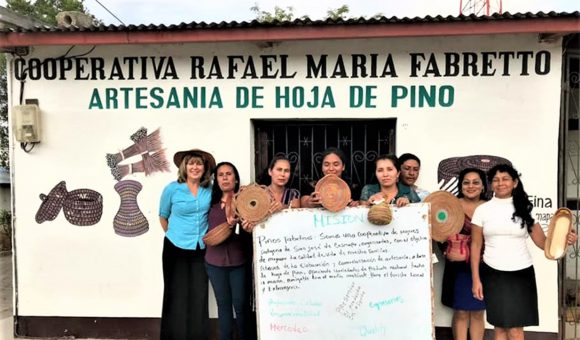 Robin Brumfield, far left, wearing a hat made of pine needles made by the women of the Pinos Fabrettinos Cooperative, Nicaragua, who are holding baskets that they made and the whiteboard with their new mission statement that each of them signed.

This article was first published in Lancaster Farming.

When Robin Brumfield, extension specialist in the Department of Agricultural, Food, and Resource Economics at Rutgers, joined her high school’s FFA club in 1969 as one of the chapter’s first girls, she had no idea that her passion for greenhouses and bedding plants would lead to a career path of horticultural excellence for more than 40 years. 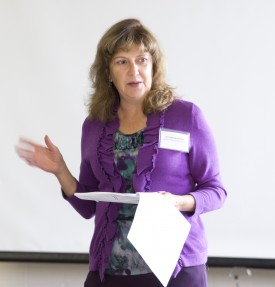 Known worldwide, Brumfield is a leading floricultural economist, doing research and maintaining Cooperative Extension excellence in the United States as well as internationally. Besides the U.S., she works in settings including Turkey, Nicaragua, Guatemala and Guyana, where she trains women farmers to become profitable in their greenhouse businesses, providing income and food security for their families and communities.

Her international work is a driving force behind numerous awards Brumfield has received, including, most recently, the 2020 International Excellence Award from Rutgers University’s executive dean of Agriculture and Natural Resources.

Brumfield’s passion for travel began in college when, as a horticulture major with minors in business and mathematics at Eastern Kentucky University, she was an FFA exchange student to The Netherlands in 1976. There, she worked for a large chrysanthemum producer.

Many years later, she took that expertise to Antalya, Turkey, as part of her sabbatical research in 2011, and then again to Georgetown, Guyana, in 2013.

But, prior to those travels, Brumfield partnered in the U.S. with Annie’s Project — Education for Farm Women, a national initiative that seeks to empower women in agriculture. She served with the program as New Jersey’s co-leader before she embarked on her own international project with the same concept. Brumfield named it Suzanne’s Project, after her daughter. The goals were the same: to teach women how to manage risk in their agricultural enterprises in five key areas: production, marketing, personnel, legal and financial.

Her journey to Turkey was the result of years of hard work, but also serendipity.

“When I started in 2011 (at Rutgers) in New Jersey, it was time for my sabbatical. Twenty-five years (earlier),” she said, “I had tried to get a sabbatical in Turkey, so I wrote to every university in Turkey, and nobody answered. Many years later, a colleague at Akdeniz University found my old letter and the file.” And so, she was able to go. 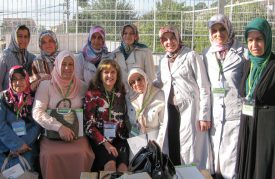 When arriving in Turkey, she was quickly struck by how different it is from the United States.

“It really made me appreciate what we have here,” she said, “because land grant systems in (American) universities have teaching, research and Extension. And, in other countries, they don’t have that combination. Turkey has Extension, but it’s a department of agriculture, and the universities are totally separate.”

Fortunately for Brumfield, her colleague at Akdeniz University had gone to college with the local Extension director.

“So, he was able to arrange visits to small villages, so we could interview women and find out their needs, and then build a program that really fit,” she said.

It turned out that what most Turkish women needed was a focus on greenhouses, especially vegetable greenhouses.

“These women didn’t realize that they were running businesses,” Brumfield said. “So we wanted to teach them how to develop a business plan to have a more profitable business and be proud of what they were doing,” she said.

They developed a workbook for the women as well as the teachers. They did “train the trainer” sessions, teaching people how to develop a business plan and the basics of production greenhouse agriculture. This innovative work led to a significant European Union grant that translated the curriculum into different languages, including Spanish, German, Turkish and Maltese.

In early 2020, pre-COVID-19 pandemic, Brumfield led sessions in her state — in New Brunswick, Newark and South Jersey. While the curriculum remained largely the same, including the preparation of a business plan, the sessions in New Jersey added a focus on women networking with other women, an important draw for many local farmers.

Her early career path led Brumfield to get her M.S. and Ph.D. degrees in horticulture, with a minor in economics and business, from North Carolina State University. She currently serves as a professor at Rutgers, the State University of New Jersey, and has been a farm management Extension specialist at Rutgers since 1988.

Her scholarly research, namely her greenhouse cost accounting program, and marketing and business management chapters in the best-selling textbook, “Greenhouse Operation and Management,” by Paul V. Nelson, are used by her peers worldwide.

The recent Rutgers award, which comes with a $1,000 stipend to be used to further her research, follows up numerous other honors, including being named a Fellow of the American Society for Horticultural Science in 2012, the society’s highest honor. And in 2013, she received the Epsilon Sigma Phi (the national Extension honorary society) International Service Award.

While Brumfield is appreciative of the awards, she said they serve a larger purpose: to be a springboard to apply for and receive grants nationally and internationally.

“My whole life has been working with people who don’t feel empowered, but they know how to grow things,” Brumfield said. “I show them that it’s a business. Food is so important. I want to give them pride in what they do.”