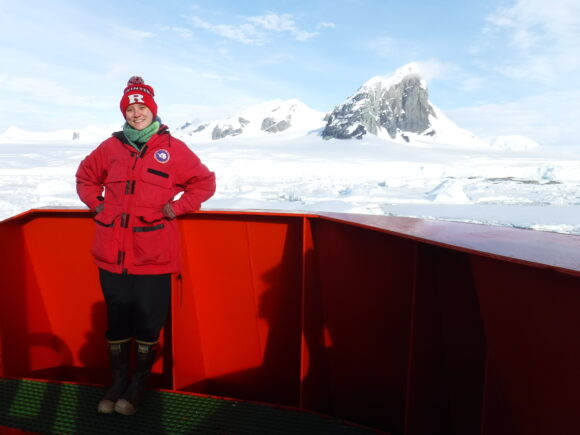 The Jersey Shore is endeared in our minds as a mystical convergence of beach, ocean, boardwalk and amusements—punctuated with sounds of seagulls and crashing waves—and seasoned with smells of salty air and clams.

Growing up at the beach provides a year-round, behind-the-scenes perspective of the Shore that summer visitors rarely see. For Hailey Conrad, growing up in Ortley Beach, NJ was a window into the interface of humans and nature, and its impact on plant and animal life. “Ortley Beach is a little beach town on a barrier island that has been ravaged by acts of environmental destruction for decades, from pollution, to overfishing, to coastline erosion and now, climate change,” said Conrad. The proximity to Island Beach State Park–New Jersey’s only undeveloped preserved barrier island that hosts a number of natural shoreline and nearshore habitats provided Conrad with a stark contrast to her developed beach town. But her firsthand lessons came from the year-round residents of Ortley Beach—the one’s whose livelihoods depended on the sustainability of that environment. From an early age, Conrad learned things in school like, “eutrophication,” “overfishing,” and “ocean acidification.” 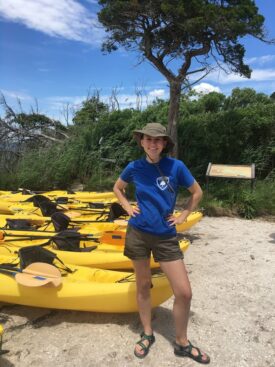 Conrad spent her summers as a naturalist and supervisor at Island Beach State Park.

But one event layered a new level of awareness to Conrad’s understanding of humans and the environment—Superstorm Sandy. Not only did it bring home the effects of climate change to New Jersey’s doorstep, the aftermath of trying to rebuild homes and lives provided an insight into the government and FEMA’s inability to assist the Storm’s victims.

The Conrad’s home was lost—not washed away like those a few blocks closer to the ocean, but by the flood damage left untouched for a month until residents were allowed back. By then the mold and water damage left only the frame intact, requiring the house to be gutted and ultimately elevated. That would take three long years.

Meanwhile, the Conrads relocated to Highland Park, where it was Hailey and her brother and sister’s job to resume their schooling and adjust to their new environment. Conrad’s parents bore the brunt of putting their lives back together, hampered by temporary unemployment and what became for her mom almost a full-time job of dealing with FEMA and accessing funds for rebuilding their home.

At age fourteen Conrad’s eyes were wide open to the understanding that adults in the world could not always be trusted. “Somebody needs to step–up,” Conrad decided, “and that someone should be me.” Highland Park High School (HPHS) provided that opportunity. Having to leave her magnet school, Marine Academy of Technology and Environmental Science in Ocean County, the science-minded Conrad sought extracurricular activities and joined the Environmental and Robotics Clubs, and along with the more liberal arts offerings in Highland Park, she found her way to step-up through activism. “In the Environmental Club it felt like we were able to make real changes at our school, and the Robotics Club got all the way to Nationals in our first year,” said Conrad. “With the Robotics Club I fell in love with STEM. It was the first time I got obsessed with a STEM project, and I get that same feeling now doing research.”

After HPHS graduation, Conrad, along with her core group of friends with diverse interests, all attended Rutgers. Conrad enrolled at the School of Environmental and Biological Sciences (SEBS) with a double major in Biological Oceanography and Ecology, Evolution, and Natural Resources and a double-minor in Fishery Science and Environmental Geomatics. Entering as a member of Rutgers Honors College, Conrad launched herself into opportunity after opportunity so that by the end of her undergraduate career, her CV looks more like that of a graduate student than an undergrad. 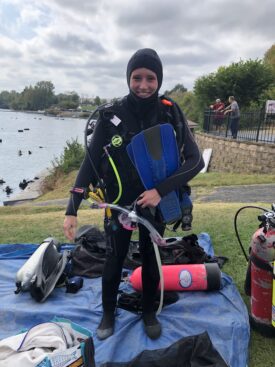 Conrad is receiving her certification through Rutgers scientific diving class, created through a collaboration between the DMCS and Rutgers Recreation.

Her strategy? Conrad divulges, “I guess I would say it’s important to apply yourself. And when I say apply yourself—I just mean literally apply for everything you can. Ask for opportunities. Make luck for yourself.” And that strategy took Conrad from the lab, to the field, to the research bench to the front of the classroom, to the podium, to the SCUBA tank, from the Pine Barrens to Antarctica.

“Overall, my main SEBS involvement has just been doing lots, and lots, and lots of research. That’s been my main extracurricular in college and takes up most of my free time,” said Conrad. Nevertheless, she found time to juggle part-time jobs to support herself, in addition to being awarded a variety of merit scholarships which amounted to a full-tuition scholarship. She honed her outreach skills through Rutgers Recreation GO Outdoors, Residence Life, and the Debate Team. For the Aresty Research Center she served first as a research assistant, then as a peer instructor. She spent her summers back at the Jersey Shore as a naturalist at Island Beach State Park for six years, including serving as a supervisor for the last two. Despite her jam-packed schedule—in addition to spending one semester in the Antarctic both on a research vessel and at Palmer Station—Conrad completed her academics in four years and is graduating on schedule, with a 3.7 GPA.

Her research accomplishments are stellar–more on that below, but her outstanding performance did not go unnoticed by her professors, who provided her with leadership and professional opportunities. In addition to being in Rutgers Honors College, she won the Department of Marine and Coastal Science’s (DMCS) Outstanding Senior Award and the Department of Ecology, Evolution, and Natural Resources’ (DEENR) Peter Smouse Award for Outstanding Student in Evolution. 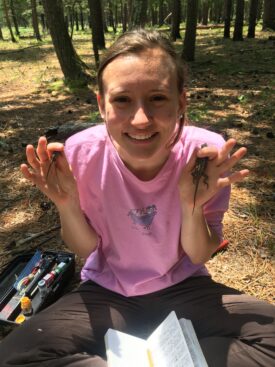 Most profound is the impression she has made on the faculty she has worked with. DEENR professor Henry John-Alder said, “Hailey delivered her presentation at the Society for Integrative and Comparative Biology in Austin, TX, and in a word, she nailed it. Her presentation was a preliminary version of her full G.H. Cook seminar.  She engaged her audience, delivered her message clearly, and responded well to questions.” He added, “Afterwards, a number of people told me how well she did, and her session chair, not knowing she’s an undergrad, asked her where she is a grad student. That made her day–her goal was to ‘blend in’ with the grad students. In short, it was an excellent kick-off to her career. Hailey is a credit to Rutgers, to SEBS, to DEENR and DMCS, and to the George H Cook Honors program. I couldn’t be happier for–or prouder of–Hailey.”

In summing up her accomplishments, Conrad was asked in the context of what unique opportunities/experiences she got at SEBS that she doesn’t think she would have had at another university. Her response:

“There are a lot of opportunities I’ve gotten here that I know I wouldn’t have gotten at another university. The research opportunities have been unparalleled. With funding from the Aresty Research Center and the Department of Marine and Coastal Sciences I’ve been able to present research at four professional research conferences over the course of my undergrad career (two poster sessions and two talks), which is unheard of at other schools.”

“At SEBS there are the resources and the professors willing to give students opportunities. I’m currently working on two different manuscripts for publication. I got to go to Antarctica by interning with the Oscar Schofield lab and get incredible hands–on experience doing oceanographic research. Through the Cook Scholars Program I was able to conduct an independent research project from start to finish. Dr. Henry John-Alder in EENR gave me the opportunity to serve as Field Team Lead this past summer. Undergrads just don’t get to do these things at other schools.”

“I feel like I’ve been able to “foster my potential” here. Through the Scientific Diving program in the Department of Marine and Coastal Sciences I will soon be a certified scientific diver, which is not something people at most other universities are able to accomplish as undergrads. When I talk to peers who have similar majors at other schools, I have way more hands–on experience and way more hard technical skills than they do just from my lab classes alone. For example, when I took Ichthyology for our final project as a class we surveyed the fish population of Passion Puddle and we were able to conduct all kinds of independent experiments as part of that project. It has given me a leg up when it comes to internship, job, and graduate school applications.” 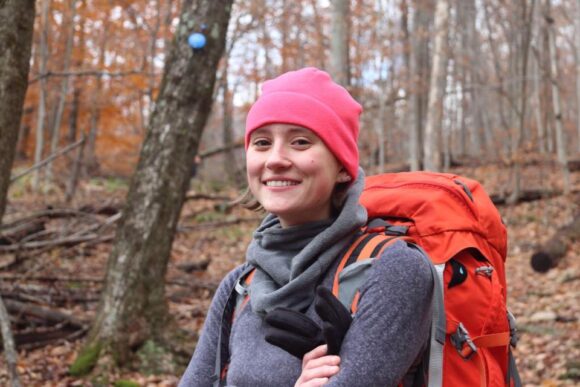 Whats next for Conrad?

“My long-term goal is to become the principal investigator for a lab. Right now I don’t have a strong preference about whether I’m more interested in working for the government, or academia, or in the non-profit sphere. After graduation I will be starting a Master’s Degree in Fish and Wildlife Conservation at Virginia Tech and after that eventually I would like to pursue a Ph.D. that would allow me to further our knowledge of marine animal reproductive and physiological ecology. I’m also really passionate about science communication and outreach, so I’m thinking about launching a podcast. I want to make sure I’m able to build that into my career as well.”

Well done, Hailey Conrad! Congratulations to Hailey and the SEBS Class of 2020!