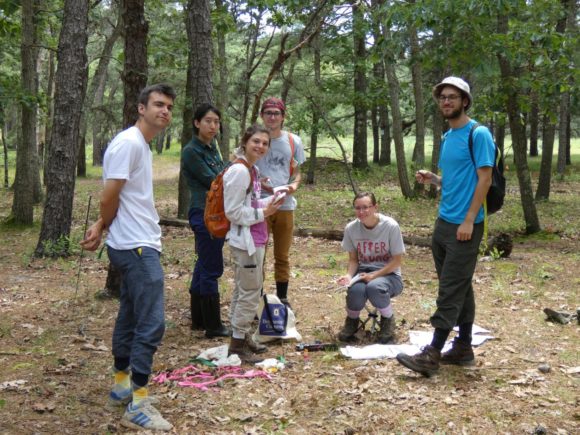 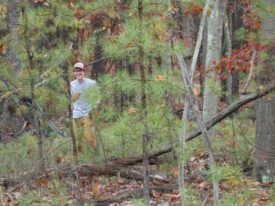 Connor Anderson searching for a lizard. 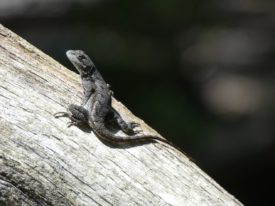 Representing the George H. Cook Scholars Program and the Department of Ecology, Evolution, and Natural Resources, seniors Hailey Conrad and Adam Yawdoszyn and junior Connor Anderson have taken to state, regional, and national stages to present their research. Their presentations are a product of their ten-week, field-intensive research internships with professor Henry John-Alder in the summer of 2019, focused on eastern fence lizards (Sceloporus undulatus) and chigger mites (Eutrombicula alfreddugesi) at Colliers Mills Wildlife Management Area in Ocean County, NJ. 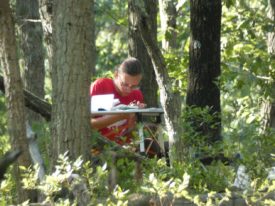 Conrad’s research investigated whether chigger mite parasitism inflicts a growth cost, which might then contribute to the development of sex differences in adult body size, where female eastern fence lizards are larger than males. Her project involved marking and repeatedly recapturing known lizards to record intensities of mite infestation and measure growth rates, together with a pioneering use of a slow-release formulation of Ivermectin to experimentally reduce the intensity of mite parasitism. Yawdoszyn used ecological data to build a predictive mathematical model of mite parasitism on lizards, and Anderson developed a mathematical model of lizard habitat selection. 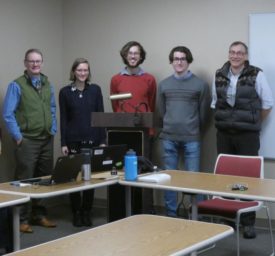 In November 2019, Conrad, Yawdoszyn, and Anderson were invited to give a joint presentation on their research to the Endangered and Nongame Species Advisory Committee (ENSAC) of the New Jersey Division of Fish and Game. Their presentation, which took place at the Fish and Wildlife facility in Assunpink Wildlife Management Area, was an important part of revitalizing the historically strong relationship between Rutgers ecology students and New Jersey’s community of wildlife professionals, including NJ DEP. 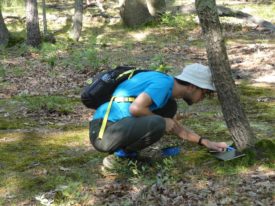 In January, 2020, Conrad mounted an even bigger stage to present her George H. Cook research in a talk titled “Tolerance of Ectoparasitism in Yearling Eastern Fence Lizards, Sceloporus undulatus” at the annual conference of the Society for Integrative and Comparative Biology held in Austin, TX. Conrad’s presentation was delivered as part of the session on “Two to Tango: Host-Parasite Interactions.”

In addition to presenting their research at the George H. Cook Scholars Symposium in April, Anderson is planning to present his research at the Northeast Association of Fish and Wildlife Conference later in April, and Yawdoszyn has his sights set on the annual Joint Meeting of Ichthyologists and Herpetologists to be held in Norfolk, VA in July.