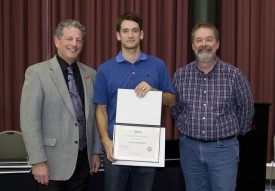 The Wilbur M. Runk Award provides monetary support to a graduate student enrolled in a graduate program at the Rutgers School of Environmental and Biological Sciences and mentored by any faculty member with an Extension Specialist appointment. This year’s recipient is John Cambridge, doctoral student in the Department of Entomology, whose mentor is George C. Hamilton, extension specialist in entomology.

Cambridge has been in the entomology graduate program for two years and a member of Hamilton’s laboratory for four years. During this time, he has become one of the top students academically, while fulfilling teaching obligations that carry a large time commitment. He has excelled in both his coursework and his teaching assignments and is developing into an exceptional researcher. He has a keen interest in entomology and is inquisitive by nature and an impressive knowledge of entomology related subjects. Cambridge’s research project involves examining the influence of time of day on monitoring for brown marmorated stink bug, Halyomorpha halys. This Asian insect invaded the United States in the mid-1990’s and has become a severe pest of numerous crops in the mid-Atlantic area.

Cambridge is developing into an excellent entomologist with a clear understanding of how research and extension can be used to impact real life situations such as invasive species and he is expected to be a leader in this area.