The 2014 Rutgers Cooperative Extension (RCE) Annual Conference convened on October 20 in the Cook Student Center. With 223 in attendance, this has been one of the largest RCE conferences to date, growing in recent years with SNAP-Ed/EFNEP members in attendance and the Office of Continuing Professional Education (OCPE) joining the fold.

For 2014, the conference incorporated special activities to mark the 100th anniversary of the signing of the Smith-Lever Act of 1914, which officially created the national Cooperative Extension System. Rachel Lyons, interim chair of the Department of 4-H Youth Development, served as presenter for the conference.

Executive Dean Bob Goodman opened the session with welcoming remarks, reflecting that for the past 100 years, while RCE has held up its end of the bargain, what has been built has been taken for granted in this era of decreased funding for Cooperative Extension. The traditional model of public funding has changed and today there is more reliance on entrepreneurship, grant funding, and philanthropy. Goodman cited online education and fees for service as examples of reconfiguring what we do and how it is paid for. From Goodman’s observations of Extension programs throughout the U.S., he contends that Rutgers Cooperative Extension represents one of the most robust programs in the country.

A special demonstration of instant feedback for programs was conducted by Bill Sciarappa, agricultural agent for Monmouth County. Using clickers with number buttons, attendees were able to register their responses to a series of questions on demographics that Sciarappa posed to the group. The results were immediately registered and projected on the screen as graphs. The results showed that most attendees represented SNAP-Ed and worked between 1 – 5 years at Extension. The majority of people worked in New Brunswick and were between 50 – 59 years old. Most had a Master’s level of education and had teaching experience with adult clients. For the skill area most needing self-improvement, the majority cited time management. The primary means that attendees reported for digital communications was e-mail, with a website coming in second. The last question concerned whether attendees were following a special diet, with the response indicating most were not, although some followed a low carb diet.

The keynote speaker for the conference was Denise Dennis, of Prepared Mind Coaching, LLC and professor at Bloomfield College. Dennis spoke on “Managing Four Generations” with regards to workplaces like Extension that employ a wide age-range of workers, some of whom may have conflicting styles. Dennis defined the four generations as “Mature,” born 1927-1945 (respects authority); “Baby Boomer,” born 1946 – 1964 (workaholic mentality); “Generation X,” born 1965 – 1979 (adapts well to change); and “Millennial,” who were born after 1980 (technological gurus). Each of these generations has their own characteristics and experiences, bringing varied perspectives, sometimes leading to conflicts, in the workplace.

Dennis recommended the Gen-Flex™ system of managing these intergenerational conflicts, which occur mostly between Baby Boomers and Millennials. The system recommends managers move into each generation’s comfort zone and to treat people the way they need to be treated. For Matures, it is best to ask, listen and show respect for experience. For Baby Boomers, give frequent recognition, coach, but don’t direct. For Generation X-ers, provide a fun workplace with team involvement. For Millennials, give frequent and instant feedback, provide technology and people skills training. Dennis added that it is important to stay honest and direct with all generations. 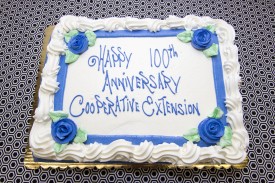 A new feature added to the conference this year was Lightening Talks. These speedy presentations were limited to exactly five minutes, with slides advancing whether the speaker wants them to or not, and no time for questions. All the presenters managed to provide in-depth coverage of their programs within the allotted time.

An endeavor that hasn’t occurred for a number of years and was re-initiated for the anniversary was the RCE group photo. OCPE Media Productions Coordinator Jeff Heckman took what is most likely the largest group shot to date of assembled RCE faculty and staff.

During lunch, a tribute to the 100th anniversary was given with a round of the Happy Birthday song led by the musical duo Bill and Casey from OCPE. Jeannette Rea-Keywood gave a summary of what happened around the state to celebrate this 100th year of Cooperative Extension. There were several tree plantings and Gloucester County celebrated with a 200 pound peach cake, which may be the largest peach cake on record. A large birthday cake with “Happy 100th Anniversary Cooperative Extension” was served at lunch. 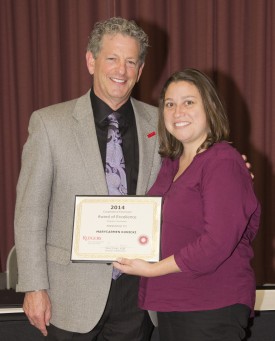 Extension Director Larry Katz gave his address, stating that the number of people RCE’s programming is reaching is impressive. Although there are budget shortfalls, external funding continues to climb, and RCE is stable. Noting that on-line courses bring in $600,000, Katz encouraged more to pursue this programming. Katz said, “Times are tough, but what we have is an incredible human resource force.” He continued, “We are the most urbanized state in the U.S. and our programs show that.”