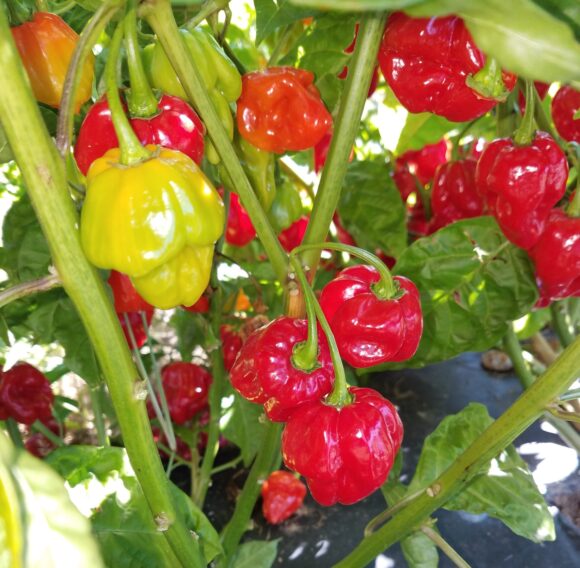 Rosebell Red is among the exotic hot peppers with growing market potential.

It’s hard to be neutral about hot peppers. People often run, pardon the pun, hot or cold when it comes to these spicy meal additions. Those with “seasoned” taste buds may ply their dishes with daring degrees of spiciness, while others who fear the burn decline to indulge. But hot peppers offer more than a spicy bite to meals and present some other uses that can turn up the heat on its market potential.

Hot or pungent peppers (or chiles/chilis [Capsicum spp]) are not yet mainstream in traditional U.S. diets, but various ethnic nationalities from Africa, Asia and Latin America have a long history of integrating hot peppers in their regular diets as well as using them as ingredients for several herbal remedies for managing common health problems such as arthritis, nasal and/or tracheal congestions and neuropathic pains. So ingrained is the value of hot peppers in some cultures, that it is part of the cultural wisdom. A popular Yoruba adage in West Africa claims, “A soul that does not eat hot pepper is a weak soul.” As they gain ground in western diets, dietitians and nutritionists regard pungent as well as sweet peppers as excellent sources of vitamins A and C and other antioxidants. 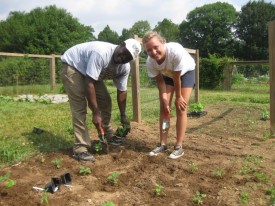 In addition to the uses of hot peppers for food and herbal remedies, the attractive colors of the plant and fruit of some pepper types add great value to the aesthetics of landscapes around homes and public places. This is indeed a fast growing enterprise in the ornamental industry in the U.S. The potential in this aspect is especially high in New Jersey, where nursery and ornamentals form the biggest economic sector in agriculture. It is also common knowledge in developing countries that hot peppers are used to prevent some animal and insect pests from attacking agricultural crops in the field and in storage. ‘Exotic’ hot peppers from other countries therefore present several tangible and potential benefits to be explored for diverse uses in New Jersey and the U.S. This is what researchers at Rutgers New Jersey Agricultural Experiment Station (NJAES) are doing in an extensive study called ‘The Exotic Pepper Project.’

The interest by Rutgers NJAES researchers is to explore various exotic peppers for meeting the needs of the clientele in New Jersey and the Mid-Atlantic for food and ornamental uses and for biopharmaceutical and bio-pesticidal applications. At the ongoing rapid rate of influx of ethnic nationalities into New Jersey (from < 20% of total population in 1990 to ~37% in 2012) and the U.S. the demand for hot peppers for various purposes is expected to grow. The Exotic Pepper Project is designed to respond to the need of this new and dynamic demographic for hot peppers. 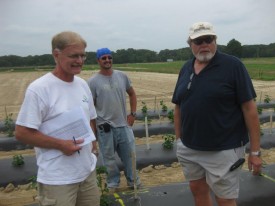 Since 2010, Albert Ayeni, ethnic crop specialist, Tom Orton, extension specialist in vegetable breeding, and Jim Simon, distinguished professor of natural plant products, have been evaluating the agricultural attributes of more than 40 exotic hot peppers at Rutgers Agricultural Research and Extension Center (RAREC) in Bridgeton, NJ; the Rutgers Snyder Research Farm in Pittstown NJ; and in New Brunswick on the Rutgers Cook Campus at Horticultural Farm 3. The exotics were compared with seven mild and sweet pepper types already grown in New Jersey. The trials showed clearly that exotic peppers will thrive in New Jersey. In those trials, three major and two minor pepper types were identified. The major types were Capsicum annuum, C. chinense and C. frutescens; while the minor were C. baccatum and C. pubescens.

Since 2010 the hot pepper trials have engaged 4-5 interns from Rutgers School of Environmental and Biological Sciences who have helped manage pepper plots at RAREC and Rutgers Gardens. Also Bill Barney, associate coordinator, crop grouping at USDA’s The IR-4 Project has worked to investigate pesticide residue retention capacity of the fruit of different pepper selections started in 2010, and IR-4 has provided some funding in addition to continuing support. Ramu Govindasamy, extension specialist in marketing and leader of the East Coast Ethnic Crop Research Group, a collaboration between Rutgers, University of Massachussetts, University of Florida and Penn State, has also been involved with the project since 2010. 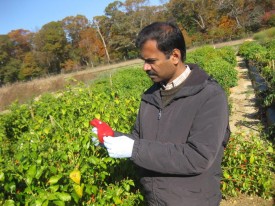 In 2013, the Exotic Pepper Project initiated the use of plant breeding methods to combine desirable fruit quality, earliness, yield, horticultural, and disease/pest resistance characteristics. In 2014, over 100 selected breeding lines are being evaluated at RAREC and Hort Farm 3.

For a number of years, Rutgers agricultural researchers have been evaluating ethnic vegetables, including hot peppers for their market potential in New Jersey. With the Exotic Pepper Project, the effort is now on expanding that potential by exploring other uses. Jim Simon’s involvement in the pepper trials focuses attention on fruit chemistry, especially the capsaicin and capsacinoid (heat level determinant in the fruit) contents of the fruit. Concurrently with exotic pepper development for food and nutrition, collaborators at Rutgers and other research universities on the East Coast will explore cultivars for prospects in the ornamental, bio-pesticidal and therapeutic industries in New Jersey and the U.S. to take full advantage of the benefits provided by these unique plant species.

While agricultural researchers have recognized the growing demand for hot peppers in the U.S., Ayeni knows their value firsthand. Originally from Nigeria, Ayeni said, “I grew up in a community that believes so much in the vitality that hot peppers add to life, and that is actually one of the reasons I became interested in growing them when I got to Rutgers”.

As the uses, interest and demand for exotic hot peppers increase, the project’s plan is for New Jerseyans to be able to tap into an expanded market of locally grown hot peppers. By 2020, the Exotic Pepper Project will release 3-6 unique new varieties of exotic/hot peppers to New Jersey growers for production. These varieties will combine the best fruit quality and horticultural characteristics from selected Capsicum annum, C. chinense, and C. frutescens breeding lines that are interbred. Constituent food processors, marketers, and retailers will be enlisted to provide demand for the harvests, and growers will be provided with seeds and transplants.