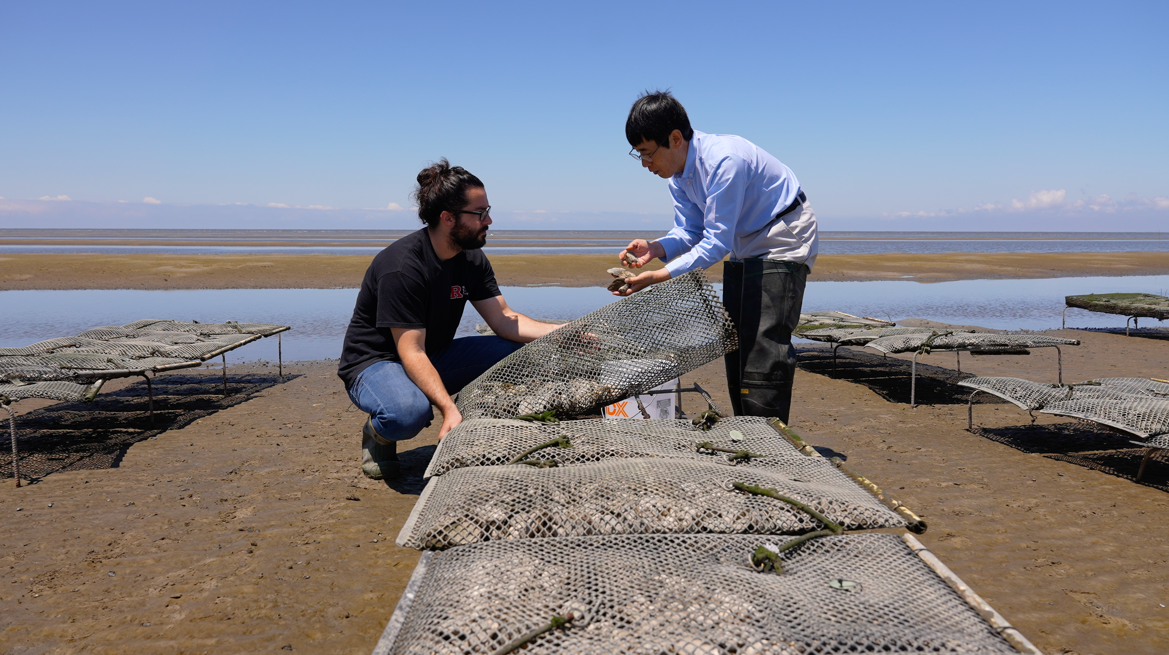 “Oysters are important marine resources for the economic wellbeing of coastal communities,” said Ximing Guo, a Distinguished Professor in the Rutgers School of Environmental and Biological Sciences and the lead PI of the project. “They are also essential for the ecological health of our estuaries such as Delaware Bay.”

Scientists also are using the chip to study complex traits such as disease resistance, low salinity and acidification tolerance. According to Guo, shellfish breeding in the genomic era should contribute more to shellfish aquaculture in New Jersey and beyond.

Eastern oyster farming in the United States has been growing rapidly for the past two decades partly because of the development of disease-resistant and triploid oysters, which have three sets of chromosomes and grow quickly.

Despite these advances, disease and mortality caused by environmental stress and exacerbated by climate change continue to pose a threat to the oyster farming industry. Researchers say continued improvement of oyster stocks with advanced breeding technologies is necessary for the sustainable development of oyster farming.

Under the direction of Guo, the Rutgers shellfish breeding program has been conducting research on oyster genomics with the goal of developing and applying advanced genomic technologies to oyster breeding.

According to Guo, a lethal oyster disease called Multinucleate Sphere X (MSX) arrived in Delaware Bay and devastated eastern oysters and the oyster industry 65 years ago. Soon after the disease outbreak, Harold Haskin, for whom the Rutgers Haskin Shellfish Research Laboratory was named, began to breed oysters for MSX resistance. The project was one of the earliest oyster breeding programs in the nation.

The breeding program was quite successful, and strong resistance to MSX was achieved after five generations of selective breeding.

However, another lethal disease of the eastern oyster called Dermo arrived in Delaware Bay around 1988, to which the Rutgers strains showed no resistance. Since then, Rutgers researchers have been working to improve the growth and resilience of eastern oysters under both MSX and Dermo diseases.

One breakthrough came in 1993, when Guo and Rutgers scientist Stan Allen invented tetraploid oysters (ones with four sets of chromosomes) for producing triploid oysters that grow significantly faster than diploid oysters.

According to the researchers, fast growth allows triploid oysters to reach market size sooner and thus reduces their exposure to diseases and mortality. Because of their sterility, triploid oysters also maintain high meat quality during the summer.

Most agricultural crops that people consume are triploids or higher polyploids. The triploid oyster technology invented at Rutgers was quickly adopted by oyster farmers worldwide first in the Pacific oyster and then in the eastern oyster. Now triploid oysters account for about 30 percent to 50 percent of farmed oysters in major producing countries including the U.S., France, China and Australia.

Rutgers disease-resistant oysters, in both diploid and triploid forms, have become popular stocks for oyster farming in New Jersey and the northeastern U.S.