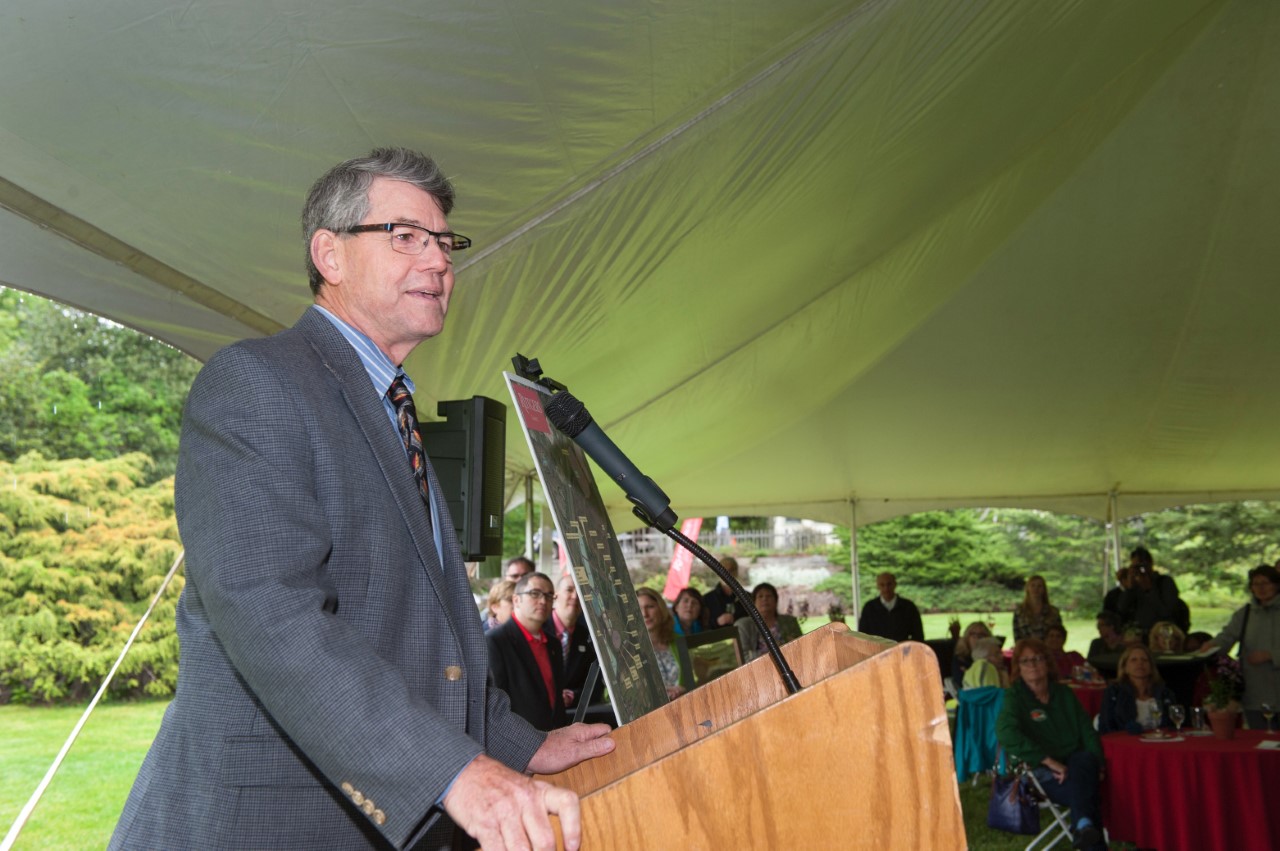 Bob Lyons (RC’76), founding chair of the Rutgers Gardens Advisory Board, has been named the 2022 Scott Medal Winner by The Scott Arboretum of Swarthmore College. Lyons will receive this prestigious award at The Scott Arboretum’s Spring Celebration on March 13.

The Scott Medal was established in 1929 to recognize individuals who “have made outstanding national contributions to the science and art of gardening.”

Lyons, a 1976 Rutgers College graduate, led the Rutgers Gardens Advisory Board during the Gardens’ centennial in 2016, which coincided with the university’s historic 250th anniversary. Bob’s tenure as chair also saw the Gardens’ designation in April 2017 as a Horticultural Landmark by the American Society for Horticultural Science. With that designation, Rutgers Gardens joined an elite group of horticultural sites like the New York Botanical Garden, the United States Botanic Garden in Washington, D.C., and Monticello, President Thomas Jefferson’s home in Virginia, which received the ASHS’ first Horticultural Landmark designation.

Lyons, a professor emeritus of plant and soil sciences at the University of Delaware, received high praise in The Scott Arboretum announcement of his 2022 Scott Medal award from peers in academia and industry.

“Foremost, Bob is a great educator who has influenced countless students. Bob has molded programs at universities and botanic gardens that reshaped their missions to better serve and engage the community. Bob’s true passion for horticulture is also exemplified in his countless articles, writings and scientific findings which help to advance the field,” noted Steve Castorani, president of North Creek Nurseries.

“In his career as a faculty member at Virginia Tech, director of the JC Raulston Arboretum, director of the Longwood Graduate Program in Public Horticulture, faculty member at the University of Delaware, and his vast contributions to horticultural photography, Bob’s impact on the world of horticulture has been diverse and well recognized,” commented Richard Harkess, horticulture professor at College of Agriculture and Life Science at Mississippi State University.

Dean emeritus of the College of Agriculture and Natural Resources at University of Maryland Thomas A. Fretz noted, “Without a budget and little support other than some part-time student help, Bob laid the groundwork for what is today the Hahn Horticulture Garden, incorporated students into the maintenance program, and initiated a fundraising effort in the local community that resulted in what is today a highly revered focal point on the campus and the southwestern Virginia region. After 17 years at Virginia Tech and having achieved the rank of Full Professor and being recognized by the University with its outstanding teacher award (the W. E. Wine Award), Dr. Lyons left for North Carolina State University where he served as Director of the JC Raulston Arboretum. During the 5-year period that Bob directed the Hahn Horticulture Garden at Virginia Tech, he expanded the gardens and helped transform them into a regional horticultural showplace including a fundraising effort that culminated in the completion of the multimillion dollar Ruby C. McSwain Education Center at the Arboretum.”

“… one of Bob’s greatest influences on the gardening world has been his Directorship of the Longwood Graduate program. His many students from this program are now scattered across North America and world in prominent positions at public gardens. … These graduates in turn touch the lives of so many gardeners and the gardening public,” noted H. Brent Pemberton, a professor and regents fellow at Texas A&M ArgiLife Research.

“Bob embraces opportunities to share his love of plants with Delaware’s green industry, master gardeners, and the gardening public. No matter if he’s in an auditorium, a classroom, the greenhouse, or garden, or assisting a customer at a plant sale, Bob’s enthusiasm is contagious. He opens participant’s eyes and mind to the beauty that surrounds them,” stated Valann Budischak, interim director of University of Delaware Botanic Gardens.

2018 Scott Medal Winner Paul W. Meyer noted, “Throughout his career spanning over 40 years, Bob has advanced these ideals through his teaching, garden and academic leadership positions, and horticultural research. Through his many students who continue to amplify his ideals throughout the world, his work continues to have lasting and growing impact. He stands tall among the many outstanding horticulturists honored with the Scott Medal over the years.”