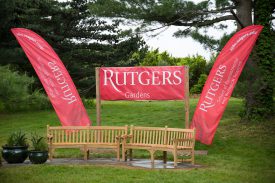 Rutgers Gardens celebrated its Centennial on May 17th with an outdoor reception under a large tent in the Roy DeBoer Evergreen Gardens. Despite the rain, the tent was packed with faculty, staff, and many supporters and volunteers. This historic moment in the Gardens’ history was commemorated with the installation of two permanent benches, a plaque, and the naming of a new commemorative bearded iris hybrid ‘Centennial Charm.’  Bob Lyons, chairman of the Advisory Board proudly announced the Horticulture Landmark Designation Award from the American Society for Horticulture Science and Bruce Crawford, director Rutgers Gardens was also honored with the Rutgers Gardens Centennial Award of Distinction. 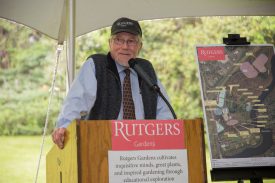 Dean Bob Goodman kicked off the gala with some remarks regarding his introduction to the Gardens.  He said that during the interview process for the position of Dean of the School of Environmental and Biological Studies and the New Jersey Agricultural Experiment Station, he was given a tour of the Gardens and then was told that the Gardens would be under his supervision as Dean. “You mean they’ll be mine?” He was clearly delighted!

Bruce Crawford, Rutgers Gardens director, gave a brief history of the Gardens, which began in 1916, when 35.7 acres of land—known as Wolpert Farm—was purchased on May 17, 1916 from Jacob and Celia Lipman. The Gardens  were intended as a functional learning space for local farmers to teach them about the new trend at the turn of the century—ornamental horticulture—and were never meant to be public, leading some to call them Rutgers’ ‘Secret Garden.’ They were never denied to the public, however, and the love for and dedication to the gardens by students, faculty and the public blossomed along with the gardens!

Chairman of the Rutgers Gardens Advisory Board, Bob Lyons, then spoke about the Gardens’ more recent past and announced that they had received the Horticulture Landmark Designation award from the American Society for Horticultural Science (ASHS). This award recognizes horticultural history and is designed to commemorate sites of horticultural accomplishment and are selected for historical, scientific, environmental, and aesthetic value—a great honor for Rutgers Gardens. 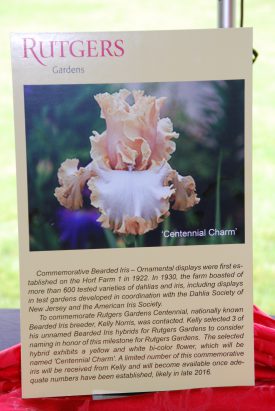 The plan for the next 100 years and beyond was then laid out by Crawford. “To embrace this remarkable history, while looking towards the next 100 years, the Gardens is unveiling a new mission statement: ‘Rutgers Gardens cultivates inquisitive minds, great plants, and inspired gardening through educational exploration and enjoyment.’  We also have a new tagline: ‘Rutgers Gardens—Where the Future of Horticulture is Grounded in Our Past,’” he said. The Gardens staff have been developing a master plan that will take visitors on a journey through time and nature. “Simply put,” he continued, “it will be an entertaining look at the story of plants on Earth and that of the Earth itself.”

Being too cold for iris blooms, the new bearded iris hybrid ‘Centennial Charm’ was represented by a poster showing off its pale yellow and white bi-color tones.  It was developed by nationally known bearded iris breeder, Kelly Norris specifically for the Gardens important anniversary. 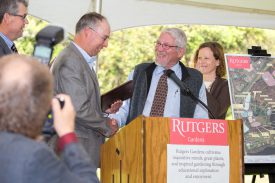 The event ended with a surprise when dean Bob Goodman, Laura Lawson, dean of Agriculture and Urban Programs, Bob Lyons and members of the Rutgers Gardens Advisory Board presented Crawford with the Rutgers Gardens Centennial Award of Distinction for his tireless commitment to the Gardens.  The award states that “A garden requires patient labor and attention. Plants do not grow merely to satisfy ambitions or to fulfill good intentions. They thrive because someone expended effort on them,” Liberty Hyde Bailey—an American horticulturist, botanist and cofounder of the American Society for Horticultural Science.