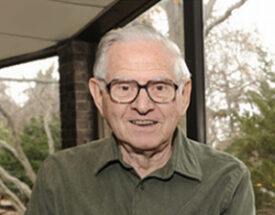 Charles Meirs Holmes, retired professor emeritus with Rutgers University, passed away on January 14, at the age of 92, in Holland, PA. Born and raised in Cream Ridge, NJ, he also resided in Titusville and Seaside Park, NJ before moving to Holland, PA in 2016. He was a 1st Lieutenant in the United State Army, and after his service, he became the county agricultural extension agent for Rutgers Cooperative Extension of Cape May County and later served as the extension agent for Rutgers Cooperative Extension of Mercer County. He retired in 1991.

Holmes worked with fruit, vegetable, nursery and turf growers, golf courses, agricultural organizations, county government groups, and garden centers. He assisted residents in solving insect, disease and growing problems in their homes and grounds. He also served residents through a weekly gardening column in the local newspaper and a home gardening radio program. Holmes was a member of numerous agricultural boards and committees and was especially proud of his association with the New Jersey Vegetable Growers and the New Jersey State Board of Agriculture.

He was known for his amazing talent of raising plants from seed and sharing those successes with his family and friends.

A Rutgers colleague, Distinguished Professor Mark Robson, fondly remembered Holmes, “Charlie was a one of a kind, he was always extremely supportive of me and I had deep respect and affection for him. To be clear, he was tough—I used to laugh in the old days when we mailed extension information—if I mailed out a newsletter on Monday, and I had not gotten a phone call from Charlie by Thursday with corrections, additions or edits, one of two things happened: I actually sent it out without mistakes, or he was away that particular week. Charlie knew his clientele, he knew his local leaders and politicians, he was old school in many ways, he was an extension professional of the highest order. We are all better for having had Charlie as a teacher, a colleague, and a friend.”

Rutgers Cooperative Extension director Brian Schilling commented, “After serving our country, Charlie served as an agricultural agent in Cape May County early in his career and then as the Mercer County agent for 28 years. I had the pleasure of speaking with him a number of times after his retirement and was always struck by his devotion to extension. Charlie was interviewed as part of the Voices of Rutgers Cooperative Extension History.  When asked to reflect on accomplishments in his career, he noted that he was most proud of ‘seeing the positive effects Cooperative Extension had on the businesses and lives of the people in the county.'”