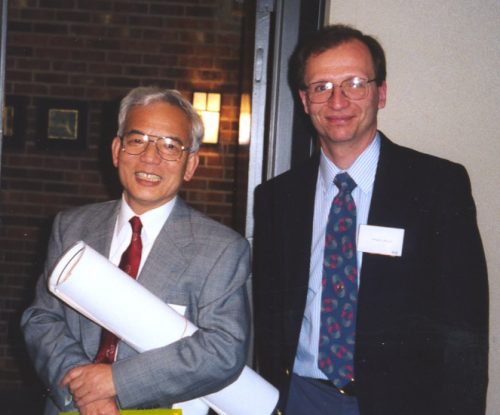 The timing could not be better. The Democratic political debates are ripe with discussion of global warming. Climate activists continue their protests around the world. And the aftershocks of the disappointing outcome of the U.N. Climate Change Conference are still being felt.

Now, in step, Syukuro Manabe and EOAS faculty member Anthony Broccoli, longtime associates, have co-authored a book published by Princeton University Press titled “Beyond Global Warming: How Numerical Models Revealed the Secrets of Climate Change.” The book chronicles the history of climate modeling and how it can forecast climate change with amazing accuracy and contribute to more accurate predictions about the Earth’s health in the decades to come.

Broccoli is a professor and chair of the Department of Environmental Sciences at Rutgers University-New Brunswick, and is also co-director of the Rutgers Climate Institute. Manabe is regarded as a pioneer for his research on the effects of increasing carbon dioxide rates on the Earth’s climate and for creating global climate models. He is a senior meteorologist in the Program in Atmospheric and Oceanic Sciences at Princeton University, and he conceived of the book more than two decades ago.

The two scientists met more than 40 years ago when Broccoli was a master’s student at Rutgers studying meteorology and took a graduate course at Princeton University taught by Manabe and Abraham Oort. A few years later, Manabe became a member of the research group at the Geophysical Fluid Dynamics Laboratory at Princeton, where he worked from 1982-2003.

When Manabe asked Broccoli to work with him on the book, Broccoli said he “was honored to have the opportunity to work with him again and make a small contribution to the book,” which is largely based on Manabe’s decades of research.  “We agreed that the book would be a compilation of the work that most influenced his understanding of climate change.  To use a metaphor, the book documents his scientific journey to a deeper understanding of climate change. I was in Suki’s group for part of that journey, and many of the topics covered in the book were the subject of many of our conversations.”

The book, while painstakingly detailed with related equations and graphics, is written for a general audience with an interest in the science of climate change and the science involved. But it’s “not just strictly for climate scientists, but also for readers from other related disciplines,” said Broccoli.

Readers should not expect any editorializing on the politics of climate change despite the avalanche of evidence provided that the Earth is warming up at a dangerous rate. “I don’t think of the book as making a political statement at all,” said Broccoli. “Our intended audience is scientists and students of science.  Our goal was better understanding of how the science has progressed.” And, as to whether the world’s major economies will settle on targets for greenhouse gas emissions soon and achieve a goal <2C° change: “Your guess is as good as mine.  Understanding the science is much easier for me than understanding the politics.”

One chapter of the book chronicles the early studies on the effect of greenhouse gases on climate change and the pioneering work of Sweden’s Svante Arrhenius (1859-1927), who “computed the change in surface temperature at various latitudes and during each season in response to a change in the CO₂ concentration of the atmosphere.”

Another trailblazer mentioned in the book is James Hansen of the Earth Institute at Columbia University, who used the new wave of supercomputers and a general circulation model to accurately predict climate change. As Broccoli said, they examine Hansen’s and other early studies and note “how most of the results have held up.” Hansen is also well-known for his 1988 testimony before Congress which raised awareness about climate change.

Now that the book is finished, after so many years in the making, there seems to be a collective sigh of relief.   “It has been a labor of love,” said Broccoli.  “There were times when I thought we would never finish.  I’m pleased that we’ve finally pushed the book across the finish line.”