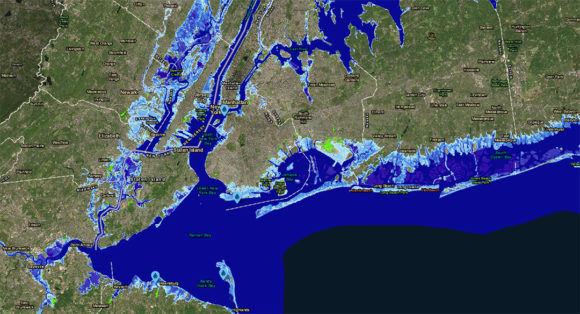 Parts of New Jersey and New York with 8 feet of sea-level rise. An almost 8-foot rise is possible by 2100 under a worst-case scenario, according to projections. The light-blue areas show the extent of permanent flooding. The bright green areas are low-lying. Image: NOAA Sea Level Rise Viewer

Since 1900, global average sea level has risen about 8 inches. In New Jersey, sea level has risen even faster – about 1.4 feet over that same period. This is primarily because the land here is sinking, due to both natural forces – the land was pushed up by a giant ice sheet 20,000 years ago and is now relaxing downward – and to groundwater pumping.

Geological records from salt marshes in New Jersey and other sites around the world demonstrate the extraordinary nature of the 20th-century rise in sea level: Both in the global average and locally, it was faster than over any comparable period in at least 3,000 years. And this rise is accelerating due to a warming ocean, melting mountain glaciers and shrinking polar ice sheets.

We are already feeling the effects of sea-level rise. A higher sea means it takes less of a tide or a storm to cause coastal flooding. Sea-level rise has increased the frequency of minor tidal flooding in shore communities about 20-fold since the 1950s. And it exposed about 40,000 New Jerseyans to Superstorm Sandy’s floodwaters who would not have otherwise been affected. With about 600,000 New Jerseyans living within 10 feet of the high tide level in terms of elevation – areas potentially vulnerable to sea-level rise and coastal flooding over the next century – sea-level rise will increasingly affect communities in ways as diverse as land use, infrastructure, property taxes and emergency management.

Over the first half of this century, the Jersey Shore is likely to experience about 1 foot to 2 feet of sea-level rise. A recent study by Climate Central and Zillow, using sea-level rise projections produced at Rutgers, found that between 2010 and 2016, nearly 2,700 homes, worth nearly $3 billion, were built on the Jersey Shore (mostly in Ocean and Cape May counties) in areas expected to flood at least annually by 2050.

Looking beyond 2050, the range of potential sea-level rise becomes increasingly broad. This is because of two big unknowns: the course of future greenhouse gas emissions and the sensitivity of the polar ice sheets – especially the Antarctic ice sheet – to warming.

Since the start of the Industrial Revolution, humans have emitted nearly 1.6 trillion tons of carbon dioxide by burning fossil fuels. These fossil fuel emissions are the primary driver behind a planetary fever of nearly 2 degrees Fahrenheit. Stabilizing the climate – at any level of warming, such as the international goals of 1.5 degrees Celsius (2.7 degrees Fahrenheit) or 2 degrees Celsius (3.6 degrees Fahrenheit) – requires bringing net greenhouse gas emissions to zero. If the world manages to do this in the next half century, then we run a good chance of keeping sea-level rise in New Jersey over the course of this century between 2 feet and 3 feet.

But if emissions continue unchecked on their historic growth trajectory, all bets are off. Unchecked emissions – enough to bring the planetary fever to 7 degrees Fahrenheit or more by the end of the century – might lead to a likely rise of about 2.5 feet to 5 feet in New Jersey. But if more pessimistic models of the Antarctic sensitivity to warming are correct, that range could instead be 4 feet to 8 feet, or more.

Tools such as Rutgers’ NJFloodMapper and Climate Central’s Surging Seas provide an initial sense of what the implications of these different levels of rise would be. With 3.5 feet of sea-level rise, the area subject to annual flooding in New Jersey encompasses about 180,000 people and $80 billion of property. With 7.5 feet of rise, it encompasses nearly 580,000 people and $180 billion of property. But such exposure assessments assume that neither people nor the land they live on respond to sea-level change – assumptions bound to be incorrect.

Under natural conditions, coastal environments respond dynamically to sea-level rise. Low-lying coastal systems and the beaches, dunes and salt marshes within them respond to increased water levels by migrating landward. In developed areas, however, coastal environments are often unable to migrate because buildings, roads and shore protection structures restrict their movement, resulting in erosion in place. In New Jersey, this “coastal squeeze” threatens both settled barrier islands and tidal marshes – the former important places for residence and recreation, the latter providers of key services, including water filtration and storage, storm buffering and bird habitat.

Three broad responses to coastal hazards are available to maintain coastal environments in the face of sea-level rise:

State programs like Blue Acres facilitate relocation and can point to some success stories, but as the Climate Central/Zillow analysis found, houses are being built in exposed areas several times faster than others are being bought out.

Use of hard shore protection structures such as seawalls, bulkheads and groins to protect infrastructure was common in the past. Now, beach nourishment is more common, and New Jersey is one of the national leaders in implementing large-scale nourishment programs. The volume of sediment available for nourishment operations in New Jersey is sufficient for now, but availability in the future is uncertain. Replenishing the beach, also known as nourishment, pushes plant and animal habitats toward the sea, where they would normally seek to move toward the land.

It is critical that the state and coastal communities develop resilience plans that are robust to the range of possible futures the state might face. We need approaches that are science-based and robust to the range of possible futures. Doing so requires coordination; it cannot happen one municipality at a time. A regional approach requires increased communication, provides opportunities for collaboration and facilitates the pooling of resources to complete large-scale projects that are infeasible for individual entities.