From November 10th, 2015 through the end of 2016, the Rutgers New Jersey Agricultural Experiment Station (NJAES) is celebrating Rutgers 250th anniversary by showcasing an all-star variety of its breeding program each month. The select varieties are developed by Rutgers agriculture and aquaculture researchers from across New Jersey. 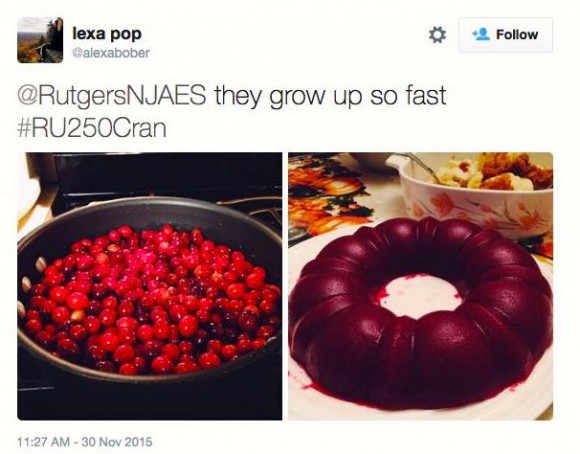 Cranberries were the featured all-star breed for November, which initiated a photo contest on NJAES’s social media pages. Facebook and Twitter followers were asked to upload photos of their Thanksgiving cranberry fare using the #RU250Cran hash-tag, and the submissions looked delicious! The winner of November’s contest is Alexa Bober, a Rutgers School of Arts and Sciences senior, who is now the proud owner of a Rutgers250 prize-pack! Interested in seeing all of the delectable photos submitted? Check out NJAES’s storify showcasing different ways to enjoy cranberries on Thanksgiving. 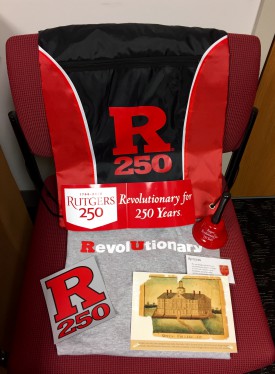 The Rutgers250 prize-pack fully stocked with a t-shirt, commemorative handbell, string-bag and more!

Last month was an especially memorable November as it marked the 20th anniversary of Rutgers’ cranberry program. In 1985, Nicholi Vorsa, director of the Philip E. Marucci Center for Blueberry and Cranberry Research and Extension, initiated the cranberry program to improve yield, fruit quality and genetic diversity of cranberries. After over two decades of breeding cranberries, hundreds of crosses, and evaluation of more than twenty thousand plant progenies, Dr. Vorsa significantly improved varieties for use by cranberry growers.

Due to the popularity of November’s all-star breed social media challenge, the contest is going to be continued through-out the next year. Check NJAES’s Facebook and Twitter pages for December contest details and you could be the next winner!