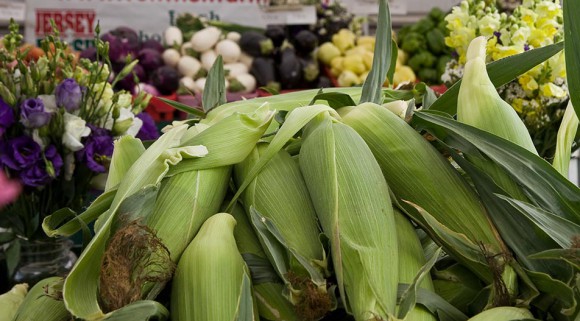 It’s summertime in Jersey and the landscape bursts into a symphony of color: greenery, flowers, blue skies and water, beach umbrellas, fireworks. And then you go to a picnic or barbeque. All of a sudden the tableau turns to a drab brown and white: Hot dogs. Hamburgers. Buns. Potato salad. Cole slaw. Cola. Lemon-lime soda. Brownies. Ho hum. That would be fine fixings in America’s heartland, where wheat and cattle and corn for high fructose corn syrup are grown, but this is New Jersey – the Garden State. We can improve on that. Let’s do a picnic makeover Jersey-style.

We asked Rutgers Cooperative Extension faculty for some suggestions for turning up the color on a Jersey picnic/barbeque. Here’s what they suggest: 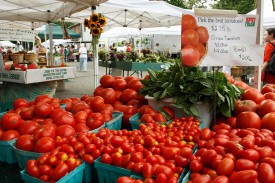 Ray Samulis, agricultural agent of Rutgers Cooperative Extension of Burlington County got the summer season off to an early start in June with a Jersey food cooking demo featuring early season vegetables. For Jersey Fresh asparagus, Ray said, “I made appetizers with steamed spears wrapped in thinly sliced prosciutto and topped with a sweetened balsamic glaze reduction. They work well either hot or cold.” Ray’s food demo took place before the Jersey field-grown tomatoes fill our farm markets – but there are some early Jersey tomatoes that show up in June, which are actually greenhouse grown tomatoes. Ray said, “Most people think greenhouse tomatoes are the ones in January that are actually field grown in Florida and Mexico.” In New Jersey, greenhouse or high tunnels allow farmers to extend the growing season and can get tomatoes off to an early start. Samulis adds, “Real locally grown greenhouse tomatoes are about as good as you can get because they were vine ripened. I topped them with fresh mozzarella cheese and a few locally grown basil leaves.” Jersey wines are a nice complement to Jersey barbeque fixings. Ray offers, “Wine for these items I would recommend would be a Jersey Traminette or Chardonnay.”

Luanne Hughes, Family and Community Health Sciences Educator at Rutgers Cooperative Extension of Gloucester County notes that more colorful meals have a health benefit. “Summer’s bounty of fruits and vegetables makes it easy to eat healthy. As a registered dietitian nutritionist, I regularly encourage consumers to “eat a rainbow” which is simply a way of explaining that the color of your food can tell you a lot about its nutritional value. If you “eat a rainbow”, that is, different colors of fruits and vegetables, you will get the many different vitamins and minerals you need. Red, orange, yellow, blue, purple, white, green and brown – I try to include as many colors as possible in my foods.” 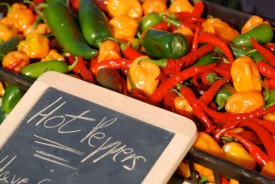 Luanne picks up on the height of the season with mid-summer offerings. “Here are a few of my favorite recipes that I often bring to summer picnics: Corn & Black Bean Salsa – Jersey Fresh corn, tomatoes, onions, and your choice of Jersey Fresh poblano, cubanelle, habernero, serrano or jalepeno peppers with black beans, combined with lime juice, olive oil, salt and Jersey Fresh cilantro.  I serve it with pita, baked chips, whole grain chips or as a side with fish, chicken and beef.”

One of Luanne’s favorite summer side dishes is a cucumber salad. “My mom called these “quick pickles.” The key is to slice the cucumbers thin and salt them a bit to draw out the water. Put 7 – 8 cups sliced Jersey Fresh cucumbers and 1 cup each of chopped Jersey Fresh onions and green pepper in a bowl with a tablespoon of salt. Let it stand for an hour and drain, and then add a cup of vinegar, a cup of sugar and one teaspoon celery seed. Mix well until sugar dissolves. 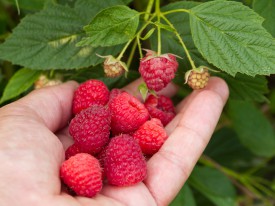 A berry good dessert is a Jersey Fresh fruit salad.

Jersey wines also make Luanne’s list. “It’s hard to pick a favorite. If I had to pick just one, I’d choose Cedarvale Winery’s Cabernet Franc.  It’s a hearty red that pairs well with Ray’s tomato/basil/mozzarella appetizer. And it’s made by Ed and Marsha Gaventa – two Gloucester County farmers who supplied fruits and vegetables for our long-running “Seeds to Success” youth farmstand project for years. I just love supporting their newest agricultural venture!” 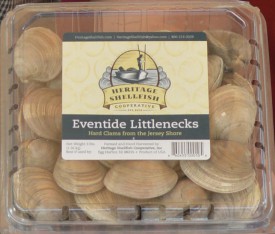 Jersey Eventide Littleneck clams from Heritage Shellfish Cooperative are great on the grill.

We can make exception to the colorful requirement when it comes to Jersey Seafood – tasty and healthful additions to any barbeque. Marine Extension Agent Gef Flimlin of Rutgers Cooperative Extension of Ocean County says that “Jersey clams are great during the summer. They are harvested almost to order each week – ask for the local ones. Put them in a small cooler and cover with ice. That will make them much easier to shuck. For keeping until the picnic just leave them in the refrigerator.” For another picnic perfect Jersey Seafood suggestion, Flimlin adds, “There are also some fantastic sea scallops being landed in Barnegat Light and Cape May. They are landed almost every day. These can either be made into ceviche, or thrown on the barbeque grill, and they go pretty fast, so don’t overcook them.”

Now that we’ve suggested a more colorful Jersey picnic, does that mean there’s no place for cole slaw or potato salad? Rutgers NJAES Director of Farm Programs Jack Rabin admits, “Call me old-fashioned, but I have a soft spot for fresh cole slaw. We sure have a lot of cabbage in New Jersey.” Ditto on the potatoes. So while these picnic standards have a place at summer picnics, that’s not to say they can’t appear in more colorful renditions. For a lively Mediterranean version of slaw, shred both green and red Jersey cabbage, toss together with fresh or dried mint, crushed Jersey Fresh garlic, sea salt, lemon juice and olive oil (optional). For 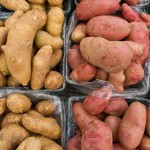 No need to peel potatoes for a more colorful potato salad.

colorful potato salad, note that Jersey Fresh potatoes come in gold, and purple and red-skinned. Add some Jersey Fresh scallions and dill to enhance the color and flavor.

There is a bounty of Jersey Fresh foods available at farmstands, community farm markets, pick-your-own farms and at many supermarkets. To find the fixings you need and recipes visit the New Jersey Department of Agriculture’s Jersey Fresh website.

Since supermarket produce departments often have produce items year round, it can be a challenge to determine when these seasonal crops are ripe in New Jersey. For a guide to what’s in season and more farm locations and events, go to Visit NJ Farms!