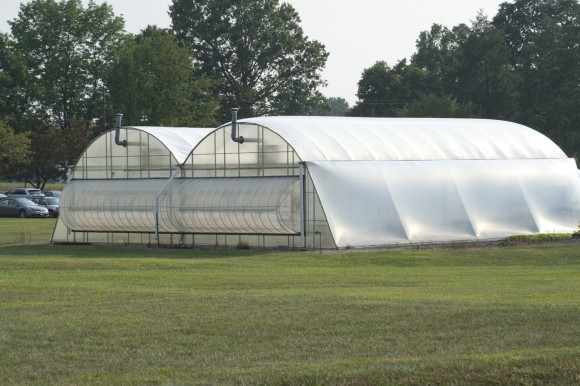 The air inflated plastic greenhouse increases food security in third world countries where it is used extensively to extend the growing season. In the US, the flowers we buy in full bloom and the flats of vegetable and herb transplants for springtime planting can be produced locally and economically in these greenhouses.

It was Christmas morning of 1964 when Bill Roberts was tinkering in his basement when he was supposed to be doing something else. The now retired Rutgers NJAES specialist in agricultural engineering was building a model greenhouse in his basement when he used an aquarium air pump to separate the two layers of the plastic film covering. As innocuous as it may seem, what Roberts did was actually an innovation that would be a boon to the agricultural industry and revolutionize the use of greenhouses worldwide. Back from winter break, the work commenced on campus in 1965 with a structure on Cook campus that served as the first ever air-inflated, double-layer polyethylene greenhouse. That original structure still stands on campus and in 2004, the American Society for Agricultural and Biological Engineering (ASABE), dedicated the structure as an ASABE Historic Landmark. Read the National Greenhouse Manufacturers Association’s anniversary tribute and more about this historic innovation that was developed at Rutgers.