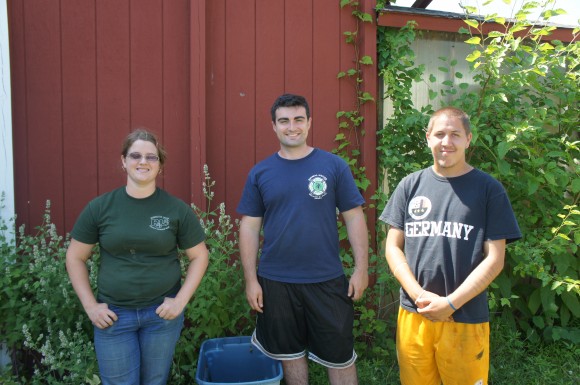 Historically, young people were taught a trade by serving as apprentices or learning the ropes from a relative in a family business. While modern education emphasizes learning through books, classroom and lab experience, academia has increasingly embraced the value of hands-on involvement and commonly provides students opportunities for fieldwork or internships.

Agricultural entrepreneurship offers its own unique set of challenges, since there is a business management component in addition to agricultural production. What better way for modern-day college students to learn both aspects than to run their own agricultural enterprises, right on the college farm? At the Rutgers School of Environmental and Biological Sciences (SEBS), a number of ag entrepreneurship opportunities have “cropped up” over the years. 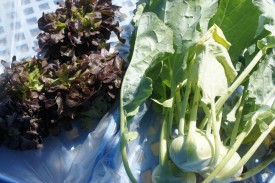 No two weeks are alike for shareholders as produce at the student farm changes with the season. Leaf lettuce and kohlrabi were amongst the early season pickings.

Long before organic farms, community supported agriculture (CSA) or the buy local movement established a foothold, the Student Sustainable Farm at Rutgers operated a five-acre organic CSA student-run farm on the edge of the George H. Cook campus in New Brunswick. Since 1993, Rutgers students have been ordering seed, planting, weeding, picking and divvying up shares of fresh veggies for weekly produce pick-ups by shareholders during the growing season.

The student interns at the farm learn the ropes from farm director and Professor Ed Durner, who demonstrates tractor use and organic farming practices not in a classroom, but in the field. While shareholders—most of whom comprise faculty and staff of the college and local residents—arrive for weekly produce pick-up, the student interns keep the inventory of harvested produce flowing from the field to the cooler to pick-up bins and interact with their shareholders. The interns produce a weekly newsletter that keeps shareholders abreast of happenings on the farm. Surplus produce is donated to Elijah’s Promise Soup Kitchen in New Brunswick. 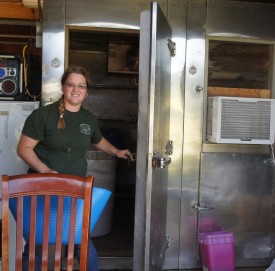 A real life lesson that the student farmers have had to grapple with is business competition. While the Student Sustainable Farm has for years enjoyed the status as the only organic CSA in town and, as a result traditionally maintained a long waiting list of shareholders, the expansion of local direct marketing agriculture has lured some of its supporters away to other new or expanding local CSAs and farm markets. As the number of shareholders for the first time dwindled, the farm intern staff has been trimmed down to three for the 2014 season. SEBS seniors Angela Polites and David Perotti, and recent graduate Peter Canavan (SEBS ‘14), are a lean team along with Durner, maintaining the production and harvest for the shareholder season, which typically runs from June through September. In this bounty of seasonal veggies, spring greens make way for summer tomatoes, squashes and peppers, with beans, potatoes, carrots, beets, melons, herbs and more rounding out the offerings.

While the Student Sustainable Farm interns deal with the competition from the fresh local produce market, another group of students have more recently entered a less competitive, but still growing field for farm production: meat sales.

It all started three years ago as a student class project. Clint Burgher, research farm manager of the Rutgers NJAES Animal Care Program charged students with raising pigs and for them to come up with a direct marketing plan for the meat. In addition to measuring feed and weight gain, the students contacted the butcher, oversaw the processing, developed packaging and the catchy slogan, “RU Ready to Pork Out?” This initiative resulted in the students providing Burgher with 2,500 pounds of pork to sell in the first year alone. The project took off from there and eventually expanded to beef, goat, lamb and chicken, all raised on the college farm. 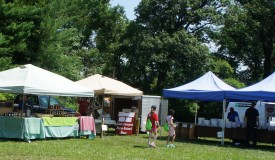 The Animal Care meat products are sold at the college farm as well as at the Rutgers Gardens Farm Market (pictured here) and the New Brunswick Community Farm Market.

While the Animal Care Farm Sales are required to price their meat products at a premium so as not to compete with private farms, since the animals are raised for research purposes, the farm does provide a niche product. Although the college livestock is fed a standard grain-based diet, the animals are not fed hormones or antibiotics, making it an attractive alternative for consumers. The meat sales revenue covers student labor costs, making it a sustainable agricultural enterprise.

Finally, the latest student venture involves three students in the Rutgers Entrepreneurial Agriculture Program at SEBS under Professors Mark Robson, Albert Ayeni and colleagues, who plan to start a small poultry enterprise at the site of the New Brunswick Community Farmers’ Market. The goal is to establish a small flock of laying hens that will provide eggs for sale. It will also serve as a demonstration site for New Brunswick residents and members of the Rutgers community who wish to learn about poultry husbandry and maintaining small family flocks for egg production. Unlike conventional business loans or venture capital, this university-based enterprise is initiating the time-honored method of obtaining seed money through fundraising. The recently announced, “Adopt a Hen Program,” is soliciting sponsorship at $100 per whole chicken, half for $50 or a quarter for $25, to provide materials to build a chicken coop and provide chicken feed for one year.

The agricultural entrepreneurship opportunities that are growing at Rutgers are set to cultivate a new generation of farmers or, at least, a group of young adults who appreciate all the hard work and challenges of sustaining an agricultural production business. Regardless of their path, these students have gained something often absent from higher education: life skills.