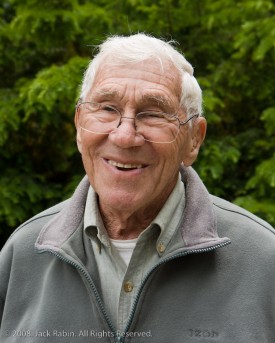 Bernie Pollack on a visit to Cook Campus in 2008. Photo by Jack Rabin

Professor Emeritus of Plant Breeding and Genetics Bernard “Bernie” Pollack passed away on July 14, at the age of 94. Pollack joined Rutgers in 1960 as faculty in the Department of Horticulture and Forestry and retired in 1985. While his work in vegetable breeding extended to eggplant, pepper and tomatoes, Pollack is most renowned for his development of the Ramapo tomato, which offered New Jersey fresh market growers in the 1960s a tomato with quality, disease and crack resistance, and durability. Since the popularity of this tomato never waned despite its disappearance from the market, Pollack kept working during his retirement, assisting NJAES in bringing this variety back to market.

During the 1970s Pollack worked extensively with New Jersey growers conducting vegetable variety trials and implementing trickle irrigation and plasticulture systems. Working with USAID and the Peace Corps, he traveled throughout Africa to further the development of trickle irrigation in African agriculture. During his travels, he collected eggplant germplasm and created one of the most extensive collections, containing 536 eggplant varieties. Pollack worked on assessing exotic eggplant germplasm to develop valuable new traits for worldwide agriculture. 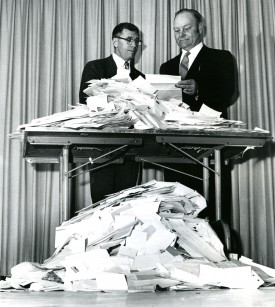 Pollack and former president of the NJ Vegetable Growers Association with mail orders for Ramapo tomato seed, 1968. NJVGA agreed to sponsor the release of Ramapo, making it available to the public. Almost 10,000 packets were sold the first year.

In addition to his work with farmers, Pollack mentored graduate and doctoral students. Pollack was known to be tough but fair, and had a sharp sense of humor, which he maintained throughout his retirement.

Donations can be made in Bernard Pollack’s name to the Rutgers School of Environmental and Biological Sciences’ Academic Excellence Fund.