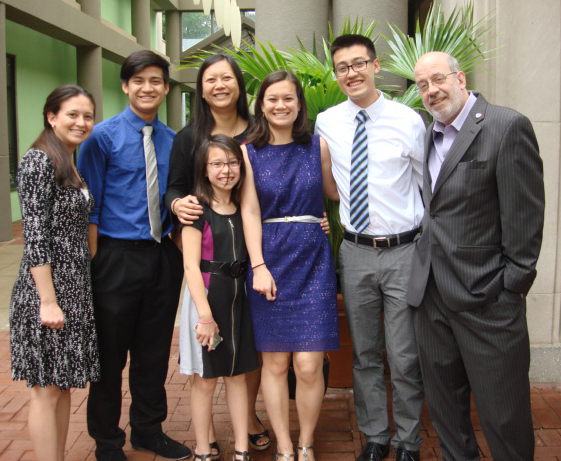 Graduation is a time when seniors reflect on the people they’ve encountered on campus and connected with in a variety of ways – as classmates, professors, advisors, roommates, club members, teammates and, for one SAS senior, mom. John O’Connell, an Economics major at Rutgers and his mother Christine O’Connell (SEBS ’14, Communications) are not only fellow Rutgers students, they’re also both graduating in May 2014.

The college experiences of the mother-son duo differ from each other but their paths have crossed at the university. They’ve used that to their advantage and their family has worked as a team to support the endeavor of the mother-son college students. The fact that Christine and John take after each other may also come into play along the way.

Christine O’Connell was born in Hong Kong “a billion years ago,” she says, and immigrated to the Bronx, NY. She attended the Bronx High School of Science and began her initial undergraduate experience at the State University of New York at Oneonta. Life, however, interrupted her studies before she finished her degree. “Falling in love, getting married and raising five children interrupted my educational aspirations,” says Christine, “but I continued sporadically taking classes at Union County College and Kean University. I recommitted to completing my degree in Summer 2009 after beginning my tenure with Rutgers Cooperative Extension as a community assistant.”

Christine matriculated as a part-time, non-traditional student at Rutgers School of Environmental and Biological Sciences with a major in Communications and a minor in Science in Learning and commuted from the family home in Plainfield, NJ. She works for the Expanded Food and Nutrition Education Program (EFNEP) at Rutgers Cooperative Extension of Middlesex County, which helps limited-resource families and youth improve their eating behaviors through nutrition education. 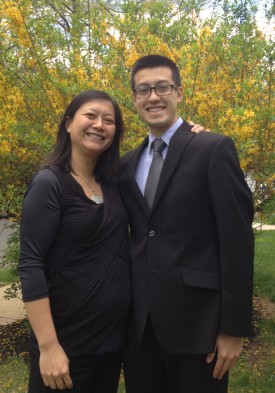 John was born the third child of five in 1992 in the Bronx. “I was and I feel the experience of having so many siblings and the way that my mother motivated all of us individually had a great deal of impact on my development. I chose to study at Rutgers for the stability it offered. My adjustment to college life was made smoother purely through proximity to my family.” He enrolled in Rutgers School of Arts and Sciences and lived on campus. Now in his senior year, he resides off-campus on the aptly named Senior Street in New Brunswick. John decided to pursue a degree in economics. “Being one of five siblings, I was always curious to learn how many different preferences affected the everyday decisions an individual has. Studying economics and learning about the intricacies of these decisions has helped me understand a broader sense of business.”

In some ways Christine’s choice of major reflects a similar thought pattern to John’s, only the intricacies apply to effective communications. Christine says, “I chose my major because I believe that many of the issues raised today, both public and private, can be attributed to lack of communication. Misunderstandings and misinterpretations can be rectified and greater collaboration encouraged through better communication. I would like to use my knowledge to work in education and better inform parents and stakeholders to take a more active role in children’s education.”

Where their college experiences may differ the most is Christine’s unique perspective as an older, non-traditional student. “I am a part-time student because I work full-time. An observation from being a non-traditional student is how much technology has become indispensable to education and how almost every student has a laptop in class; some to take notes, some to follow the PowerPoint, some to play games and others to shop. It is amazing how integral technology has become in multiple aspects in our lives but the change in the approach to higher education is astounding.”

Christine cherishes her second chance to finish her degree. “I also believe that being a non-traditional student gives me a different perspective on how seriously I take my education. I know that education is a privilege not to be taken for granted and because I have been given another opportunity to achieve, I put effort into doing so. With that said, I am very proud of my 3.85 GPA.”

When traditional students are done for the day and go back to their dorms, apartments or family homes to hit the books, a full-time working mom has to deal with squeezing it all in. Says, Christine, “Work/life balance is always a challenge but more so when school is added to the mix. Scheduling has become more frenetic and I often miss many of my children’s afterschool activities due to class. When I finish my studies, I plan on making it up to my youngest daughter by attending every game she plays and making a spectacle of myself.”

Fortunately for Christine, working for Rutgers provided a supportive environment for attending the university. “Rutgers Cooperative Extension of Middlesex County, Larry Katz, director of Rutgers Cooperative Extension, and my department director Debra Palmer have been very supportive of my continuing studies. When I was nominated to be a G.H. Cook Scholar several years ago, Dr. Katz graciously agreed to be my mentor through the program but I found due to my time constraints, I could not follow through with the program. Dr. Palmer has been understanding about changing my schedule to accommodate classes that were only offered during working hours.” 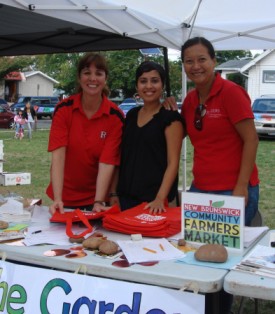 Christine (right) at the nutrition table at the New Brunswick Community Farmers Market with Patricia Munoz, Rutgers Office of Institutional Diversity and Inclusion, and Emily Ijalana, community assistant at EFNEP.

One of the areas where the O’Connells paths have crossed, and again share a common thread, is through their Rutgers employment. John’s older sister Stephanie (SEBS 2011) had informed him about the plethora of opportunities New Brunswick offered. “I soon learned about them as I became a Market Manager for the New Brunswick Community Farmers Market, sponsored by Rutgers and Johnson & Johnson. That experience showed me what I had in my life and how grateful I should be. It is an experience I doubt I could have received anywhere else and I am truly thankful that I met so many inspiring people.” As a community assistant at EFNEP, Christine’s primary duty is to teach nutrition to limited resource groups of various ages. One of her duties includes staffing the EFNEP sponsored nutrition education table at the farm market where their paths crossed several times. Says Christine, “It was very nice seeing my son in a work setting and hear others speaking highly of him.”

The O’Connells have managed a supportive environment in their student and family life. Christine discloses, “It has been very nice having John attend school with me and having him on campus. I have used John as a babysitter for his youngest sister several times when I had to go to class.” She continues, “He and I both took Psychology 101 with the professor, same semester, he in the morning and I in the evening and were able to share notes and information as the semester progressed. This semester, John took a class that I took previously and he was able to dig through my old texts to find the textbook he needed and save a few dollars.”

For John, the true value has been having the emotional support, not to mention an adult perspective on class material. John states, “It is helpful to have her close to me, as it allows us to meet and speak whenever I have a heavy decision on my mind. In the classroom, my mother has always been an asset.” When they were enrolled in the same psychology course, Christine’s insight was welcome. “Psychology can be a very subjective topic and having my mother’s input on many different focuses of the subject was eternally useful.”

Balancing life while a parent and child are attending college can take a toll on a family, but their mutual support helped keep things on an even keel. John reflects, “I think my family had to deal with a great deal of stress when my mother and I were both studying at Rutgers at the same time, I know my little brother and sister immediately became closer from being the only siblings left of the five living in the house. My mother has always been impressive at handling her responsibilities and with the help of my father she was able to maintain peak functionality in our household.”

While the O’Connells’ experience appears seamless, it is not all rosy for a kid going to school with his mom, especially when she’s irked at you and you have a run-in on campus. “My mother and I have a relationship that is built on honestly and I take pride in the ability that we share of being able to properly express our feelings. When any mother is angry however, this expression can get passionate. No son likes to be under constant pressure from his mother and when there is opportunity to run into her at the library, that displeasure becomes a lot more apparent. For the most part my mother is very considerate of my ability to achieve the goals that we have set out for me. When I deviate from the path she is there to quickly remind me.”

As Christine and John near graduation, they are optimistic and share similar hopes. “Looking ahead to graduation is very exciting,” says Christine. “ I feel like another chapter of my life is concluding yet opening up new opportunities to begin new chapters. I plan on continuing my employment at Rutgers but am actively seeking new positions that would use the new skills and knowledge that I have gained.”

John shares similar sentiments. “Looking forward to graduation has me extremely excited. I have thoroughly enjoyed the opportunity that Rutgers offered me, but I feel prepared to take the next step in my development. Currently I am applying to many different job types. I hope to find a position in the greater New York area that will help me to improve my skill set.”

Congratulations to the O’Connells and the Class of 2014!