With oyster beds and cranberry bogs as their laboratory, two SEBS researchers are using genetics to improve breeds for the shellfish and cranberry industry, respectively. Ximing Guo and Nicholi Vorsa are recipients of a 2013 “Inventor of the Year” Award from the New Jersey Inventors Hall of Fame. 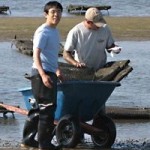 Ximing Guo, scientist with the Rutgers Institute of Marine and Coastal Sciences, is being recognized for his work in genomic studies of oysters towards a better understanding of the genome organization and inheritance of economically important traits. In New Jersey and much of the mid-Atlantic region, native eastern oysters have been devastated by diseases. Rutgers NJAES has been selectively breeding oysters for disease resistance since the early 1960s and its oyster strains have shown strong resistance to one disease, but not to other new diseases. The Pacific oyster is a close sister species of the native eastern oyster and its genome provides a valuable catalog and map of genes that affect oyster biology. Using the Pacific oyster genome as a reference, Guo, who works out of the Haskin Shellfish Research Lab, and colleagues are decoding the genome of the native eastern oyster to identify the genes responsible for disease resistance. This will advance the field of genetics and Rutgers’ selective breeding of farmed oysters and other molluscs. 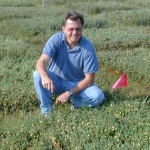 Nicholi Vorsa, director of the Philip E. Marucci Center for Blueberry and Cranberry Research and Extension, initiated the Rutgers cranberry program in 1985 to improve yield, fruit quality and genetic diversity of cranberries. The New Jersey cranberry industry has long relied on a few widely used varieties with a narrow genetic base. With almost thirty years of experience breeding cranberries, with hundreds of crosses and evaluation of more than 20,000 plant progenies, Vorsa has released three improved varieties for use by cranberry growers, Crimson Queen®, Demoranville® and Mullica Queen®. All three of these unique and improved cranberry varieties are gaining acceptance by growers for their improved qualities and performance.