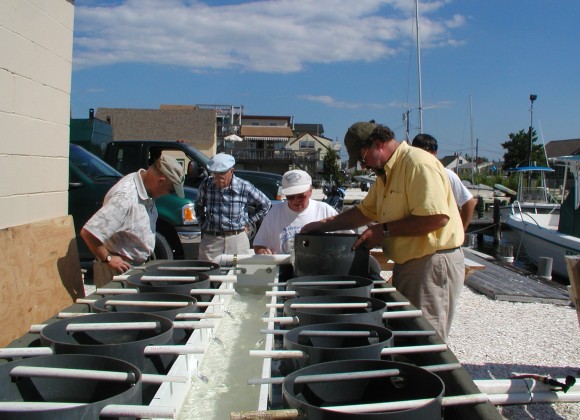 Land-based shellfish nurseries are a one-pass process that uses bay water to feed the tiny shellfish with natural phytoplankton. This process helps to reduce the nitrogen loading in the bay. Gef Flimlin, Rutgers marine extension agent (at right) and ReClam the Bay volunteers, all graduates and certified shellfish gardeners of the Barnegat Bay Shellfish Restoration Program, maintain the upwellers containing the shellfish and clean the shellfish weekly as they grow to a size suitable for planting in the field.

Now in its eighth year, the Barnegat Bay Shellfish Restoration Program (BBSRP) has enrolled another round of volunteers who are trained to conduct educational outreach and expand the effort to grow hard clams and oysters in land-based nurseries along the bay. These hard clams and oysters are eventually transferred into the bay. BBSRP is a program jointly run by Rutgers Cooperative Extension of Ocean County and NJDEP Division of Fish and Wildlife’s Bureau of Shellfisheries.

At face value, the BBSRP seems to be about shellfish restoration, but in fact, it is an environmental stewardship program that uses shellfish to focus peoples’ attention on the Barnegat Bay and how human activity in the watershed impacts the bay. 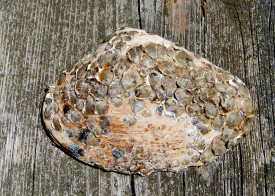 Oyster larvae are placed into a tank of shellbags to “set” on the shells. In a few weeks they look like this and are ready to be dumped on the reef established by NJDEP Bureau of Shellfisheries. These oysters grow and increase the biodiversity of the reef.

This year, the program is growing 1 million clam seed and 200,000 oyster seed. The tiny 2-3mm clams arrive at the nursery systems from five clam hatcheries in New Jersey while oysters of the same size come from the Rutgers Aquaculture Innovation Center in Cape May, NJ. The program also receives oyster larvae from Rutgers that are set on bagged oyster shell and are transferred a few weeks later to a reef established for the program near the mouth of the Toms River.

The single clams and oysters are grown from Mantoloking to Beach Haven in upwelling nurseries which are land-based tanks with silos, in which the tiny shellfish are fed bay water. At the end of the season, oysters that are large enough are placed on the reef and all the clams are planted under predator control nets on two leased areas in the Barnegat Bay. The following fall, the clams are harvested and broadcast-planted in various locations around the bay. 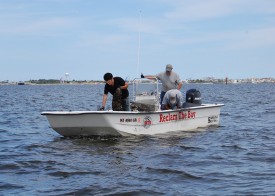 ReClam the Bay staff and volunteers drop shellbags of oyster larvae onto the reef near the mouth of Toms River.

Throughout the year, those participants in the BBSRP program become ReClam the Bay volunteers who conduct outreach at fairs and festivals, give lectures to civic groups and also provide educational programs to elementary schools throughout the state.

This year, The ReClam the Bay volunteers and the BBSRP program leaders have decided to assist the full-time commercial shellfish growers in Barnegat and Little Egg Harbor bays who could not harvest their crop from early November 2012 until Easter 2013 due to the devastation of Superstorm Sandy. The program will donate a good portion of this year’s crop to these baymen to offset the economic losses they suffered during the winter months. Three oyster growers will get about 50,000 oysters and a number of clam growers will get clam seed.