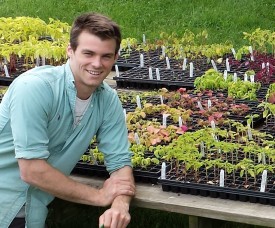 David Byrnes, a graduate student in the Department of Plant Biology and Pathology at the School of Environmental and Biological Sciences, is the recipient of a U.S. Borlaug Fellowship in Global Food Security for 2013-2014. This program is funded by the United States Agency for International Development to study and manage the global landscapes in support of sustainable food systems and to address the key points of the “Feed the Future” initiative for food security.

Byrnes’s recently completed his first year as a graduate student under the mentorship of Professor James Simon of the Department of Plant Biology and Pathology and founder of the New Use Agriculture and Natural Plant Products Program (NUANPP) at Rutgers. Byrnes has also helped publish manuals that are designed to improve production and post-harvest practices for small-holder agriculture in developing countries.

Byrnes’s research at Rutgers focuses on the link between nutrition and sustainable agriculture in developing nations. This involves the development and education of baseline nutritional data with new and affordable methods for preservation and packaging of low-input crops. The goal is to identify low-cost options for delivery of nutrition through regionally or culturally preferred crops so as to ensure nutrition and food security. Another important goal is to provide a source of real income to small farmers and a way for them to gain access to international markets.

Byrnes’s project as a Borlaug Fellow is complimentary to his dissertation in the screening and nutritional characterization of the germplasm of African Indigenous Vegetables (AIVs) at the World Vegetable Center in Arusha, Tanzania and at Rutgers. Byrnes will travel to Tanzania to continue this work in the early part of 2014. African indigenous vegetables, consumed by millions in sub-Sahara Africa, have not been well studied. Byrnes’ work will help characterize the nutritional composition and anti-nutritional factors of amaranth, vegetable nightshade and spiderplant.

The fellowship received by Byrnes is named in the honor of Dr. Norman Borlaug, who was awarded the Nobel Peace Prize in 1970 for a lifetime of work to feed a hungry world. Through the development of new wheat varieties and improved crop management practices, Borlaug transformed agricultural production in Mexico during the 1940s and 1950s and later in Asia and Latin America, sparking what today is known as the “Green Revolution.” For his efforts in the fight to prevent hunger, famine and misery around the world, Borlaug is widely credited with having “saved more lives than any other person who has ever lived.”