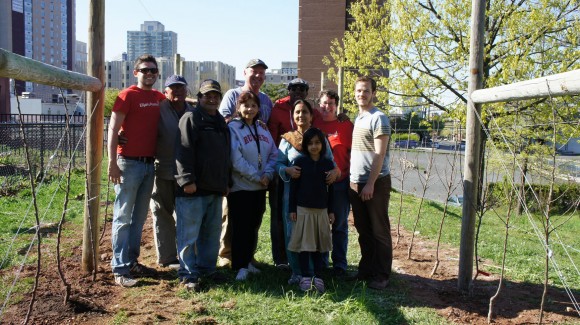 A new community apple orchard at the Shiloh Community Garden in New Brunswick, NJ, practically sprouted overnight in late April. A group of volunteers from Elijah’s Promise, New Brunswick Community Food Alliance and local residents as well as staff and faculty from various departments at Rutgers, planted an orchard of 40 apple trees in one day and installed 90 feet of trellis to support the trees.

Spurred by a conversation between Mark Robson, dean of agricultural and urban programs at Rutgers School of Environmental and Biological Sciences, and Lisanne Finston, executive director of Elijah’s Promise, during a 2012 visit to Philadelphia community gardens, the idea became part vision, part challenge. Robson enlisted his colleague Win Cowgill, area fruit agent with Rutgers Cooperative Extension to design and implement the orchard project.

New Brunswick is home to Rutgers’ oldest and largest campus community. The city is filled with restaurants, theaters, large and small businesses, hospitals, a train station and the university. Despite its diversity and culture, New Brunswick is considered one of 134 “food deserts” in New Jersey. The Economic Research Service of the USDA defines food deserts as areas where people have limited access to a variety of healthy and affordable food, influenced by factors such as availability of grocery stores, income, vehicle availability and access to public transportation.

In New Brunswick, a number of organizations are partnering to create opportunities for residents, many of whom are low income or senior citizens, to have access to locally grown food. The creation of a New Brunswick community farmer’s market and several community gardens are initiatives that have been in place for several years, with involvement from many local organizations, including Rutgers University.

Shiloh Community Garden is located on Tabernacle Way, between Neilson Avenue and George Street in New Brunswick. Neighborhood residents, local youth groups, children and young adults comprise its membership. The garden was established as a passive community park and garden in May 2010 as a collaborative project among the City of New Brunswick, Elijah’s Promise, and the United Methodist Church of New Brunswick, which owns the land. The garden houses raised garden beds, a shed, compost bins and a source of water for the garden. The orchard is adjacent to the garden and will use its water source. 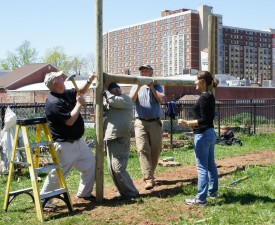 While there are challenges to placing an orchard in an urban setting, this particular project was designed for manageability in a small space. According to Robson, apple trees from dwarfing rootstocks along with a tall spindle trellis system create the effect of a “Wall of Fruit.” The idea is to occupy minimal space, with full dwarf trees, so that the majority of the work and harvesting can be done from the ground or a small step ladder. This production system is very precocious, meaning the trees will start to bear fruit in the second and third season.

Cowgill selected three apple varieties, all chosen for the disease resistant characteristics and high fruit quality for this urban orchard. All three are resistant to apple scab, the most serious fungal disease, that can lead to complete defoliation and significant fruit loss on standard varieties. Cowgill explains, “the late Rutgers fruit breeder Professor L. F. Hough, discovered the gene for apple scab resistance when he was a doctoral student at University of Illinois. Identified in a crabapple tree, Malus floribunda, the gene, known as the Vf gene, is the basis for all scab resistance in these varieties.” 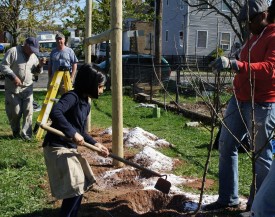 Areebah Alam digs a hole while Keith Jones readies the tree for planting.

Robson plans to continue to help the orchard establish roots by installing a drip irrigation system. Rutgers NJAES and faculty and staff will show Elijah’s Promise staff and Shiloh community gardeners how to maintain the orchard. A first year Byrne Seminar, which focuses on research and interests of faculty and introduces students to the range of intellectual and career possibilities offered at Rutgers, will also be developed around this activity.

According to Finston, the apples will be community fruit to be shared by gardeners and members of the community, as well as for use in the Elijah’s Promise soup kitchen and culinary school. The trees will bear their first fruit in fall of 2014.