The state of affairs in the West African Republic of Liberia can be summed up by a mix of adage and metaphor, “It takes a village to put Humpty Dumpty back together again.” But the country, which faces a multitude of economic, social, technological and environmental woes even as it struggles to redevelop after back-to-back civil wars, is not alone. A U.S.–Liberian liaison is working on ways to reconstruct the nation and develop strategies to address its most critical needs.

At the core of this effort is the Liberian Studies Association (LSA), a scholarly organization based in the U.S., which furthers research on topics relevant to Liberia in cooperation with cultural, scientific and educational institutions. LSA, which facilitates academic exchanges between Liberia and the U.S.,  sponsored its 45th annual conference, a three-day event held April 4-7 at the Rutgers Edward J. Bloustein School of Planning and Public Policy in New Brunswick, NJ. The university, which has its own extended network of initiatives in support of Liberia’s redevelopment, hosted the event. The conference was led by Jim Simon, plant biology and pathology professor at Rutgers School of Environmental and Biological Sciences and Perumalsamy Balaguru, professor in the Rutgers School of Engineering. 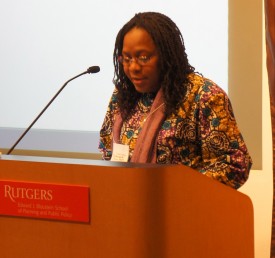 Ousseina Alidou, director of the Center for African Studies at Rutgers, makes opening remarks at the LSA conference.

Rutgers involvement in Liberian redevelopment issues is multi-disciplinary, with the link established when former dean of University College, Emmet Dennis, became president of the University of Liberia in 2009. The five-year program, called the Excellence in Higher Education for Liberian Development (EHELD), is funded by an $18.5 million grant from the U.S. Agency for International Development to a consortium led by RTI International, a nonprofit organization based in North Carolina, that works with countries in transition to new governmental and economic systems. Rutgers received $3.8 million of the grant, which includes funds to recruit 45 faculty to teach and work at the Engineering College at the University of Liberia in Monrovia, the nation’s capital, and in the College of Agriculture and Sustainable Development, at Cuttington University in Suakoko, a rural agricultural region a few hours outside of the capital.

Rutgers is part of a consortium of schools, including North Carolina State University and the University of Michigan, involved in the project, which seeks to build two centers of excellence in engineering and agriculture, respectively, within the Liberian universities. The goal is to revise the curricula, renovate the lab and facilities, and upgrade the capacity of the Liberian faculty and staff to improve the skills and caliber of the graduating students. EHELD will stimulate the reconstruction of universities and infrastructure in both of these Liberian institutions of higher education.

The opening session of the 2013 conference, themed the Human Aspect of Development in Liberia: Steps, Strategies, and Sustainability, featured welcoming remarks from President of the Liberian Studies Association Jackie Sayegh, along with Rutgers faculty Mark Robson, dean of agricultural programs at SEBS; Tom Farris, dean of the School of Engineering; Jim Simon; and Ousseina Alidou, director of the Rutgers Center for African Studies. Following the conference, a reception was held at the Zimmerli Art Museum where guests dined on West African cuisine.

Emmet Dennis (second from right) is welcomed back to Rutgers by (L-R) Jim Simon, Robert Goodman and Perumalsamy Balaguru.

Two special guests and key players in the U.S.–Liberian development initiative were University of Liberia president Emmet Dennis, who as the plenary speaker, discussed the evolving Liberian experience of the role of the University in the rehabilitation of a post-conflict country, and Charles Mulbah, dean of College of Agriculture and Sustainable Development at Cuttington University, who spoke about his university’s role in Liberia’s agricultural development.

According to Jim Simon, “Many daunting challenges face Liberia – from political stability, infrastructure, governance, human development, unemployment, to the need to develop a skilled workforce and to better educate the younger generation of Liberians. Yet, such challenges need to be viewed as opportunities and in this context we are honored and feel privileged, both as individuals and as a university, to participate in this process.”

The presenters at conference sessions represented university, government and private organizations from across the U.S. and Liberia. Liberia’s most pressing issues of development were covered at the conference, including repatriating Liberian refugees, gender equality, sustainable development, agricultural development, education, educational reform, economic growth and poverty reduction.

Many of the presentations brought to light how dire the situation in Liberia is today. The presentation by Jose Alfaro and Shelie Miller from the Center for Sustainable Systems at the University of Michigan revealed that Liberia has the lowest level of access to electricity in the world. Although efforts are underway to provide electricity to the population, policy calls for centralized development that is concentrated mostly in the capital city. As a result, the majority of the rural areas will continue to have no  access to electricity through 2025. Much of the sustainable development is based on the premise that decentralized electrification projects can help stimulate the economy of rural Liberia. Anaerobic digestion of agricultural waste is one such project that is being developed in the joint U.S.–Liberian effort.

Marilyn Silberfein, professor emeritus from the Department of Geography and Urban Studies at Temple University, addressed the Liberian refugee situation. According to Silberfein, “The circumstances encountered by Liberian refugees have turned into a model of a protracted refugee situation. A combination of two civil wars plus the reluctance of many refugees to return home has resulted in their remaining outside of Liberia for for as many as twenty-three years. Since 2004, programs have been underway for the return of refugees but many remain fearful of the potential for ongoing insecurity, lack of land and other resources, or other problems.”

Rutgers Library of Science and Medicine staff Laura Palumbo, Martin Kesselman and T. Michael Weah discussed how communities’ access to libraries can ultimately lead to poverty reduction. They indicated that, elsewhere in Africa, public libraries are the primary conduits for agriculture, health and education information but in Liberia, however, libraries are the missing link. They discussed the implications of the “back to the county” initiative instituted by Liberian President Ellen Johnson Sirleaf and the country’s lack of infrastructure, leading to serious divide in the areas of literacy, learning, gender, and the internet between urban Monrovia and the rest of the country.

Their presentation explored how librarians can play a major role in the development of an information-rich curriculum for extension with Cuttington University as a partner and how the idea of community knowledge centers and mobile devices might be employed in rural communities to create a presence for teaching, learning and knowledge.

In addition to the Library of Science and Medicine, there are several other Rutgers programs involved in the EHELD initiative. Dean of the the Rutgers School of Engineering Tom Farris explained how students involved in the Rutgers chapter of Engineers Without Borders, which has worked on water access projects in Guatemala, Thailand and Kenya, will also help rebuild the physical and cyber infrastructure in Liberia. This initiative is being led by Professor Balaguru. 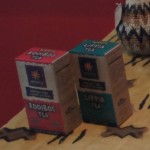 The Mpuntu brand of teas were developed through the Rutgers New Use Agriculture and Natural Plant Products program.

Jim Simon, who serves as director of the Rutgers New Use Agriculture and Natural Plant Products program, and his colleagues have active research and development projects in several African countries that focus on the sustainable use of indigenous plants to provide income opportunities for rural and vulnerable communities. A donation of African herbal teas from the Agribusiness in Sustainable Natural African Plant Products project, in which Rutgers is involved, provided conference attendees with delicious rooibos, honeybush herbal teas from South Africa, lemongrass from Zambia and lippia from Ghana. The Mpuntu brand teas are an example of the power of communities when banding together to produce a high quality plant-based product. All packaging and design were done in Africa, the products were grown by locals and profits were returned to the communities.

Other Rutgers programs focused on Liberian development include social work, journalism, agriculture and non-timber forest products (medicinals, spices, and foods from the forest) and science, information technology and African studies.