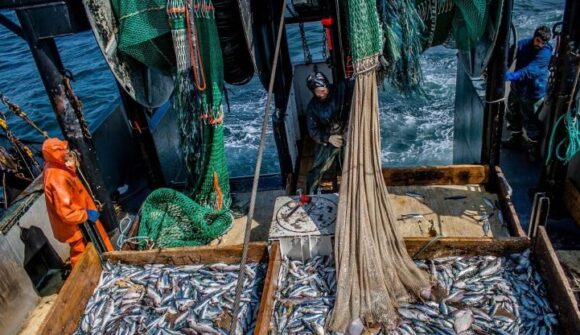 Scientists conduct a trawl survey off the coast of New England. (NOAA)

NOAA Fisheries has launched the Distribution Mapping and Analysis Portal, a new tool developed in collaboration with the Global Change Ecology and Evolution Lab at Rutgers University, to better track the location and movement of marine fish in U.S. waters.

An interactive website, this tool reveals that the ranges of many marine species are shifting, expanding and contracting in response to changing ocean conditions. It will enhance the ability of NOAA Fisheries and its management partners to identify, plan for and respond to climate-driven changes now and in the future. In addition, it will improve data sharing and collaboration, facilitate decision-making about fishery management and science and increase overall knowledge of species distribution for stock assessments.

Malin Pinsky, associate professor in the Department of Ecology, Evolution, and Natural Resources, serves on the advisory board for the new portal. He and his team have worked with NOAA over the last two years to ready the new portal, which is the next generation of the OceanAdapt portal that was developed and run since 2014 by Pinsky’s lab at Rutgers. OceanAdapt developed the methods, code, species distribution indicators and visualization techniques that now form the core of the new NOAA portal.

“After running OceanAdapt as a prototype for the last eight years as it gained an international audience, it’s exciting to see NOAA acquire our tool for long-term stewardship. I think there’s no better recognition of OceanAdapt’s value and of the importance to fisheries and protected species management in North America,” said Pinsky.

“One key lesson from OceanAdapt and the new NOAA portal is that the ocean and the species in it won’t be the same next decade. Beyond just understanding past changes, we now need to use next-generation climate science and data analytics to forecast those future conditions and help businesses and governments prepare,” he added.

The portal also allows increased access to species distribution information and model results from across the nation will help foster a “community of practice” among scientists which can help advance the field, and also provide a useful tool for outreach and education regarding changing fish and invertebrate distributions. 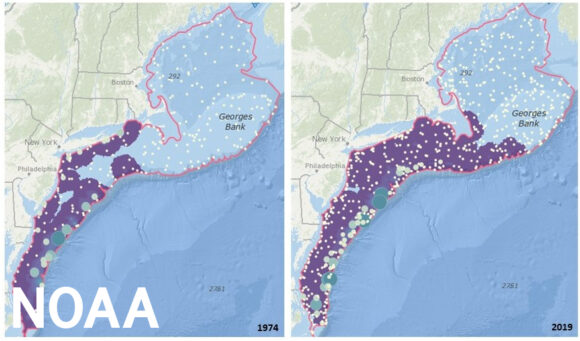 These maps from the Distribution Mapping and Analysis Portal show changes in black sea bass distribution from 1974 to 2019. Black sea bass expanded approximately 140 miles north over this period of time. (NOAA)

The portal displays data from NOAA Fisheries bottom trawl surveys for five regions (Northeast, Southeast, Gulf of Mexico, West Coast and Alaska) and includes a map viewer and graphing capabilities for over 800 marine fish and invertebrate species caught during the surveys. Understanding how species are distributed in space and time, and the factors that drive patterns, are central questions in ecology and important for species conservation and management.

The OceanAdapt portal will stay active to continue displaying the maps and graphs for both U.S. and Canadian regions of North America.