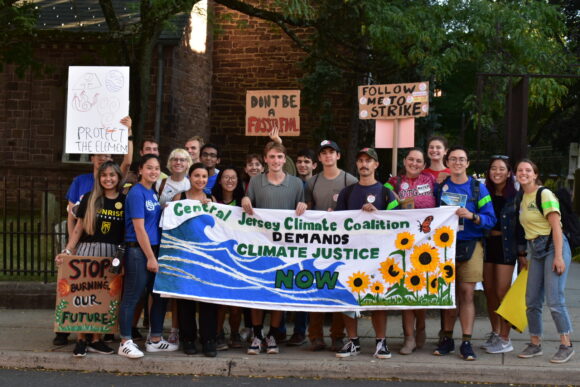 Nolan Fehon (center, with blue cap) and student organizers of the 2019 Climate Strike.

Throughout his time as a student at Rutgers School of Environmental and Biological Sciences (SEBS), Nolan Fehon has made sustainability, climate change and environmental activism his passion and mission. Fehon has been a member of Students for Environmental Awareness (SEA) for four years, serving as secretary for one year and as president for the past two years.

His first milestone during his time in SEA leadership was (along with the Rutgers Faculty Union) to bring together the Central Jersey Climate Coalition and organize the Rutgers/New Brunswick Climate Strike in September 2019. Approximately 800 people participated, and as a result, the Rutgers Climate Task Force was created to develop a climate action plan. “One of the biggest highlights of my college career was the day of the 2019 Climate March through New Brunswick,” said Fehon. “Seeing that many people not only care about our impact on the environment, but care enough to take to the streets and even stop traffic. It shows how great of a community we have here at Rutgers.”

Fehon (bottom left) at SEA’s Eboard meeting with President Holloway (top, center) about their priorities for climate action at Rutgers.

Later, Fehon became the New Brunswick undergraduate representative to the task force where he helped coordinate town halls, created educational resources about climate action at Rutgers, and weighed in on meetings with task force members and administrators (including Rutgers President Jonathan Holloway). Currently, Fehon sits on the student board to the new Office of Climate Action, where—before he graduates this spring—he is helping to solidify student’s roles within this office.

The climate strike also provoked more calls for fossil fuel divestment. Last year the SEA collaborated with Rutgers University Student Assembly to initiate a referendum on fossil fuel divestment. To get it passed, Fehon and his team conducted boots-on-the-ground promotion to get enough votes. The fruits of their labor paid off, resulting in getting the divestment passed within the assembly with over 90% in favor. This student consensus strengthened the Endowment Justice Collective’s official divestment request, overall resulting in the university committing to divest from fossil fuels last year. 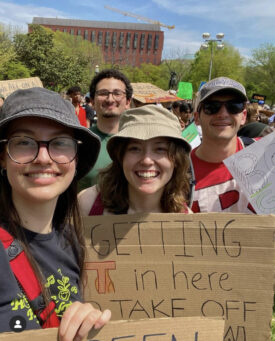 In 2021 Fehon also wrote a Daily Targum column every other week under the heading “Climate Corner,” which informed students on climate action at Rutgers. Recognizing that he had learned a great deal in his sustainable energy campaign in SEA during his sophomore year, he used his column to share this information with his fellow Rutgers students.

Earlier this year Rutgers sent out a request for proposals for another on-campus solar build-out. Once Fehon heard about the initiative, honing his networking skills, he reached out to director of sustainability and energy at the Rutgers Energy Institute, Mike Kornitas, who helped him secure a spot on the committee to hear the bids from the prospective solar companies.

Last but not least, as SEA president, Fehon also worked with their sustainable transportation campaign (SEAt) to get the bike rental program reinstated—rental bikes are back at Rutgers—and hopefully more bike lanes will follow soon. It’s just one more example of how Fehon has made sure that students’ voices are being heard loud and clear and taken seriously by the administration. He has passed on his passion for activism to other students to make sure that his important work continues.

Silke Severmann, associate professor and undergraduate program director, Department of Marine & Coastal Sciences, who nominated Fehon for the Cook Leadership Award—for which he was selected—said, “Nolan has excelled in both his academic accomplishments as well as his inspirational and selfless activism on behalf of our current and future generations of students. He has accomplished a lot in his four years here, and he has helped train future students to continue the activism. Nolan has shown great leadership skills and will leave behind a lasting legacy at his alma mater.”

As if his activism was not enough to make him stand out, Fehon has also been an outstanding student. In his four years at SEBS he has conducted research in no less than five different labs:

With associate professor Heidi Fuchs and postdoc Corie Charpentier in the Department of Marine and Coastal Sciences (DMCS), he aided research on light pollution and its effect on crab larvae. 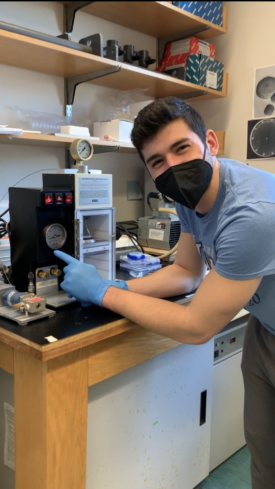 Fehon waiting for pressure to build in a “Gene Gun” used to transform phytoplankton with CRISPR complex.

As part of the Aresty Summer Science Program he worked with associate professor Malin Pinsky and application developer Michelle Stuart in the Department of Ecology, Evolution and Natural Resources to study the effects of climate change on clown fish populations in the Philippines. Fehon commented, “Being an Aresty summer researcher was such a great experience. At a lot of internships students may make a lot of great connections, but those connections are spread across the country. It was nice to start at Aresty and have a great group of Rutgers peers to talk about our goals and aspirations over the summer and hold those connections through the rest of my years here.” 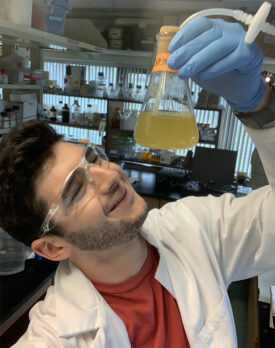 In the Falkowski Lab, Fehon is observing a dense culture of phytoplankton grown for his experiments.

Next, he decided to learn about small-scale biology. In Distinguished Professor Paul Falkowski’s lab in marine sciences he worked with postdoc Jihua Hao on Martian iron oxide and mineral formation as climate/water indicators. Later he worked in the same lab on nutrient cycling in the Archean Ocean. A manuscript from this work is currently under review.

Not to be slowed down by COVID, Fehon started working with post-doctoral fellow Ken McGuiness in the Department of Biochemistry and Microbiology doing research on the early evolution of proteins as part of the NASA ENIGMA project. Building on what he learned from the Pinsky lab and other DMCS courses, he taught other team members how to code. Some of Fehon’s work has also been used by one of the ENIGMA lead PI’s (professor Vikas Nanda, Center for Advanced Biotechnology & Medicine) in his team presentations.

Finally, Fehon spent last summer at Scripps Research Institute in Jupiter, FL, doing a mix of structural and cellular biology. From his experience at Scripps, he tailored his George H. Cook Thesis with Falkowski on retrograde signaling in marine diatom. The end goal of this project is to use CRISPR to investigate photosynthetic regulatory processes.

Reflecting on his choice of Rutgers for his undergraduate education, Fehon noted, “The biggest reason I came to Rutgers was because it’s … big! At a university like ours we have funding for research across so many disciplines and it really makes it easy for an undergraduate to find the topics that interest them most, and that’s what it did for me – bouncing between population dynamics, to Martian chemistry, to oceanic photosynthesis. Not only in the research we do as a university, but in the people we draw in – our department brings in speakers from around the country/globe to discuss their research in weekly seminars, and I know many other departments in SEBS have something similar.” He noted, “This community perspective in SEBS really puts the current research conversations right at the feet of undergraduates.”