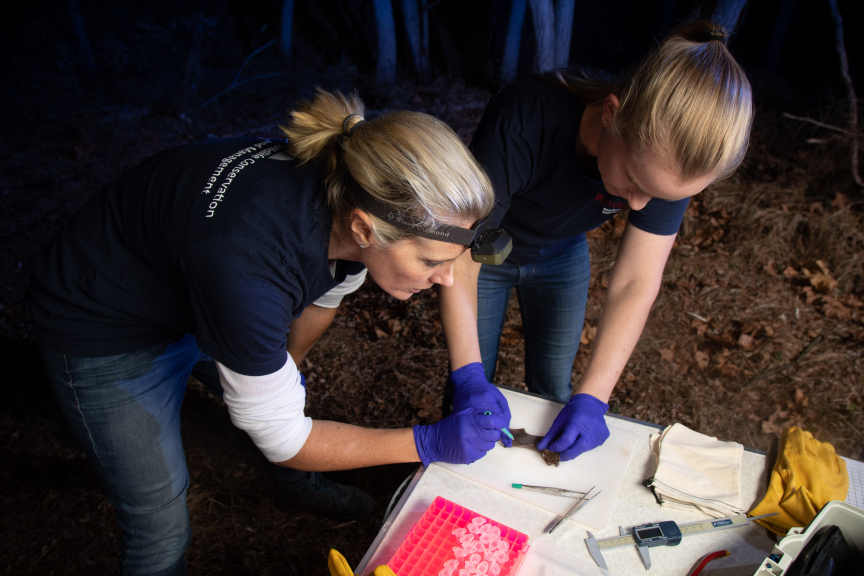 Principal investigator Brooke Maslo, associate professor in the Department of Ecology, Evolution, and Natural Resources, was awarded $268,081 to field-test a promising method of treating environmental reservoirs of Pseudogymnoascus destructans, the pathogen that causes white-nose syndrome in bats.

The Rutgers grant is part of a total of $770,000 in grants awarded by the National Fish and Wildlife Foundation (NFWF) to four projects to combat white-nose syndrome, a disease that is devastating bat populations in North America. The grants were awarded through the Bats for the Future Fund, with support from the U.S. Fish and Wildlife Service, as well as Southern Company and the Avangrid Foundation.

Maslo and team will test the efficacy of using whole-room ultra-violet (UV) light treatment in 10 mines that host hibernating populations of little brown bats in Michigan, New Jersey and New York. The project will test the ability of commercially available UV technology to benefit bats by killing or slowing growth of the fungus in summer when bats are not present.

Over the past decade, white-nose syndrome has killed millions of bats, which are an important part of healthy natural environments, consuming billions of insects, including many agricultural pests. White-nose syndrome is caused by an invasive, cold-loving fungus that attacks hibernating bats, causing them to burn through winter fat stores and starve.

More than half of the bat species in the United States and Canada hibernate to survive the winter, making them potentially susceptible to the disease. Since signs of white-nose syndrome were first observed in upstate New York in 2006, the disease has spread rapidly, moving steadily westward across the United States and Canada. It has now been confirmed in 37 states and seven Canadian provinces, with new detections each year.

“White-nose syndrome is a threat to the existence of a number of bat species native to North America and this challenge requires an all-hands-on-deck fight to help bats survive,” said Jeff Trandahl, executive director and CEO of NFWF. “Together with the Fish and Wildlife Service, Southern Company and the Avangrid Foundation, I am confident that the grants we announce today will make a difference in the fight against this terrible disease.”

Since its inception in 2017, the Bats for the Future Fund has awarded more than $3.8 million in grants to support research and implement management strategies that slow the spread of white-nose syndrome and improve survival of bats across the U.S. and Canada. Grants are supporting collaborations among federal and state agencies, universities, non-governmental organizations and for-profit corporations, who have joined forces to prevent potential bat extinctions caused by this emerging wildlife disease.

Read more on the 2021 Bats for the Future Fund award recipients.