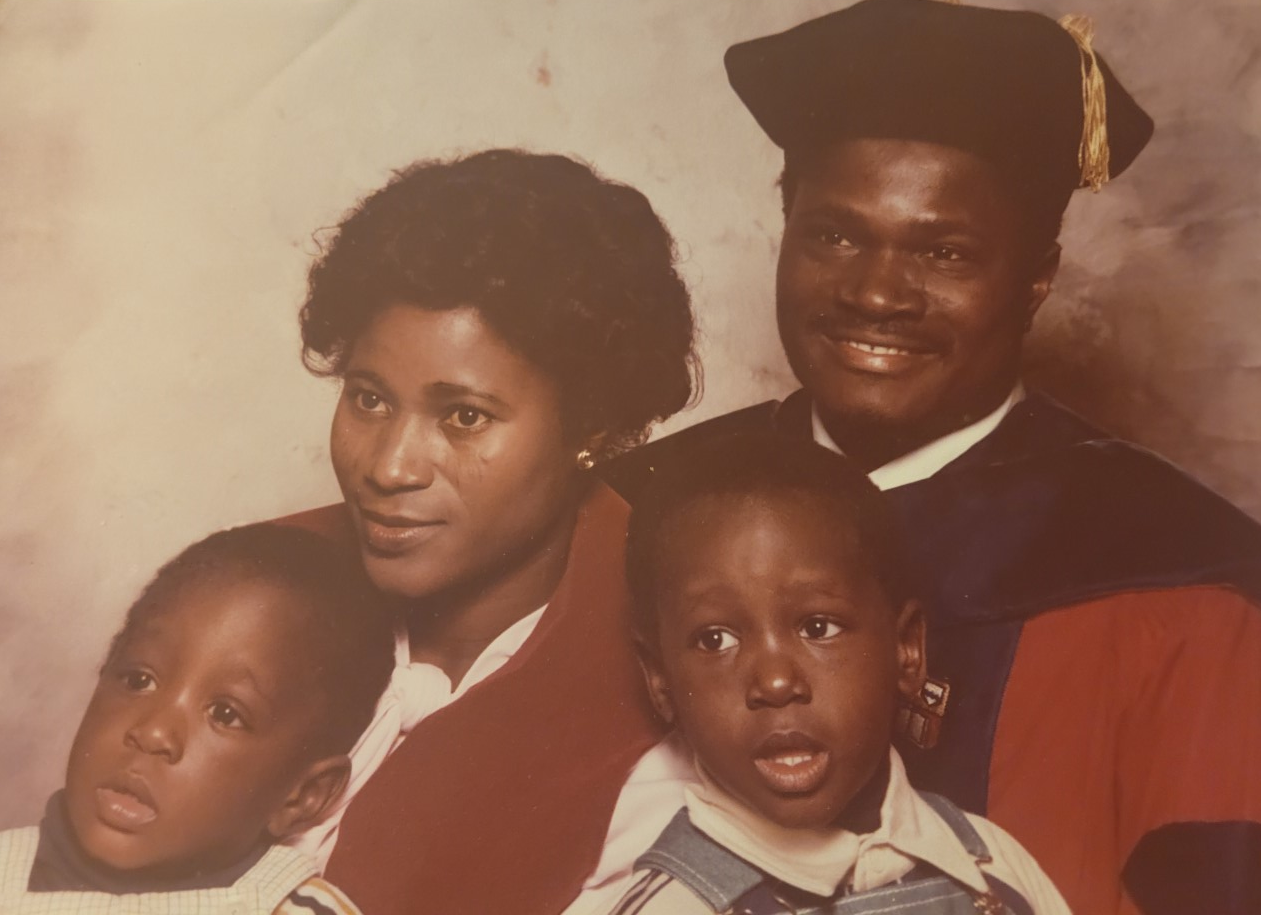 Albert Ayeni, pictured in academic regalia, and his family at his 1982 graduation from Cornell University, where he earned a a master’s and doctoral degree in weed science and agronomy.

February marks the start of Black History Month, among the most widely recognized heritage months in the cultural calendar of the U.S. It serves as a time in which the contributions of African Americans are celebrated and moreso in recent times, the continued struggle for racial justice in America is highlighted.

To celebrate Black History Month in 2021, Newsroom will feature a member of its SEBS-NJAES community and we start first with Nigerian-born Albert Ayeni, an ethnic crops research specialist in the Department of Plant Biology.

Ayeni first came to the U.S. as a graduate student at Cornell University, in Ithaca, NY, where he earned a master’s and a doctoral degree in weed science and agronomy. He returned to Nigeria in 1982 after graduating from Cornell and worked as a professor at the University of Ibadan until 1995, when he came to Rutgers first as a visiting scholar at then former Cook College before becoming a research associate. In his current role as an ethnic crops research specialist, Ayeni is perhaps best known to many on the George H. Cook campus for leading the exotic pepper project at Rutgers.

He shared his educational journey and some of his particular experiences and perspective as a Black man living in contemporary America with SEBS/NJAES Newsroom.

As an immigrant from Nigeria, how would you generally describe your experience of living in the U.S.?

Life in the U.S. for me has been a tremendous blessing when I look back at what it was like in Nigeria when I left in 1995. I moved from an environment of limited opportunity for human development and self determination to one of abundant opportunity. Living in the U.S. gave me the opportunity to support my family and give them a chance to advance their individual aspirations in ways that could not have been possible in Nigeria, at the time. 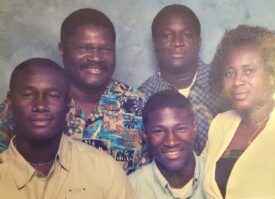 Albert Ayeni and his family upon his arrival at Rutgers in 2002.

How did your life in Nigeria, particularly your academic journey, prepare you for the transition to the academic environment in America?

I first came to the U.S. after obtaining my bachelor’s degree at the University of Ibadan, the premier university in Nigeria, when the standard of tertiary education compared admirably with the top universities in the Western world. The high quality of education that I received prepared me superbly well for moving to the U.S., I believe. Cornell University at the time recognized the quality of education at the University of Ibadan and waived for students from that university the GRE and TOEFL tests that were required of other students to be admitted for graduate studies from other African institutions. Prior to getting my undergraduate degree in crop science at the University of Ibadan, I attended St. Barnabas Secondary School, a Missionary-sponsored school known for its high-quality education and the Federal Government College, Sokoto. Both of these secondary institutions prepared me ultimately for admission to the premier universities in the U.S. So, indeed the culture of high-quality education from the grassroots to the tertiary level did prepare me well for moving to America.

How does the 2021 Black History Month theme, “The Black Family: Representation, Identity and Diversity,” resonate with you as a Black man living in America?

Since joining Rutgers in 1995 I had not given much thought to this theme until the events of 2020, which brought to the fore the deep wound of systemic racism against black and minority communities in America, and its ramifications. As a relatively recent immigrant, my focus has been to work hard to support my family to the best of my ability. I have been fortunate to find myself in an environment where I was spared the agony of discrimination that many others with my skin color have suffered for many years. The Black Lives Matter movement brought it out very clearly to me that the cause that the late Rev. Martin Luther King Jr., Brother John Lewis, and so many other people of color had fought for (and are still fighting for) over the years is so real that the country must rise to fight the evil of racial discrimination. The Black family in 2021 still suffers unduly from social injustice, healthcare disparity, and unemployment, which must be addressed to advance equity in representation, identity, and diversity in our country.

We just witnessed Kamala Harris, the first woman, first woman of color and the daughter of two immigrants, being inaugurated as the Vice President of the United States. As an immigrant yourself, can you share your thoughts on this particular historic first?

The swearing in of Kamala Harris as Vice President on January 20, 2021, brought back to me the intense emotions I felt when Barack Obama was declared winner of the 2008 elections. Kamala’s inauguration as V.P., like the inauguration of Barack Obama as President, is a testimony to the possibilities of America. Indeed, they represent the notion that sky is the limit for every citizen. The fight though must continue for equal representation, identity and diversity as we advance to a more perfect union in the United States of America. I am optimistic about the future!

You’ve spent a number of years as part of the Rutgers community, especially on the George H. Cook Campus. Is there a particular moment that stands out in your mind in which you feel either particularly included or excluded?

The Black Lives Matter protests of 2020 stood out clearly as one that made me reevaluate my identity. Up to that point, I had no reason to feel particularly included or excluded at Rutgers University. At George H. Cook Campus, I have not paid sufficient attention to this human characteristic and cannot say categorically if there have been such intentions towards me at any point in time. I am proud of the racial diversity across Rutgers and look forward to a future where the university will set the pace for the rest of the tertiary institutions in the country and ultimately the entire country.