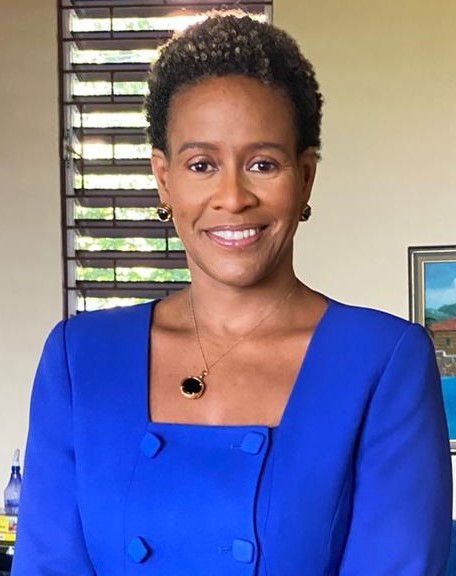 Newly appointed in September 2020 as a senator in her native Jamaica, Sherene Golding Campbell is among a record number of women in that nation’s parliament: eight out of 21 Senate members, and 18 of 63 in the House of Representatives. Although Golding Campbell GSNB’02 traveled a twisting road from studying food biology to evaluating legislation, public service was not unfamiliar to her.

Golding Campbell’s father is Bruce Golding, who had a long career in politics before serving as Jamaica’s prime minister from 2007 to 2011. After earning degrees in zoology and chemistry at Howard University in Washington, D.C., Golding Campbell had returned to Jamaica to work for her family’s chain of retail bakeries when she met a Jamaican Rutgers alumnus who suggested that she pursue food science at the university. “The more I looked into it, I said that this is exactly what I want to do: marry my science background and get into the [food] industry,” Golding Campbell said.

She was on track to get her doctorate when she realized that the long hours of lab work and research were not for her. A lifelong interest in the law led her to Georgetown Law and a career as an attorney. She practices commercial and business law as she balances her new official duties: drafting and reviewing bills and approving or vetoing legislation. In her previous job as parliamentary liaison to the then-minister of justice from 2007 to 2011, she found that her science background helped her analyze technicalities in a proposed DNA evidence bill.

“In science, you start from a point of not knowing and you ask a question, hoping to find an answer,” she says. “In law, you start from the conclusion. You know what the problem is, what has happened—how do you work it back to the beginning before the problem happened to determine the remedy? The discipline is the same; we’re just attacking it from opposite ends.”

Bolstering the economic recovery of Jamaica in the wake of the coronavirus is a priority for Golding Campbell. Yet she is also passionate about strengthening individuals’ rights against government intrusion and expanding access to health, education, and economic opportunities for women, children, and other marginalized groups. An academic at heart, she wants to push for a legislative process driven by more data and research.

Editor’s Note: Sherene Golding Campbell received her master’s in food science in 2001 under then advisor Prof. Karl Matthews, current chair of the Department of Food Science.