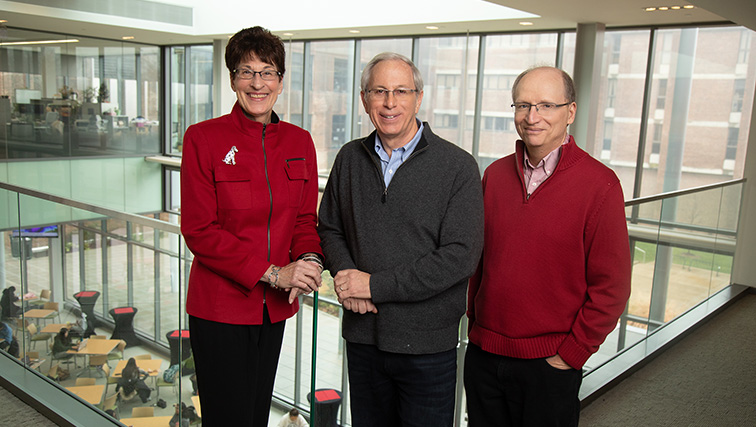 Whether they returned to the school or never left, these faculty members are among a number who are also alumni.

SEBS faculty hold degrees from universities across the nation and around the globe, but there are also a number of homegrown faculty who received their degrees when the school was known as Cook College. These three featured faculty not only received their undergraduate and graduate degrees from the school, but they also lead renowned centers and are consulted experts in their fields. We asked them to reflect back on their years as students, share some memories of those days, and remember elements that were linchpins in their careers.

Broccoli is a professor in and chair of the Department of Environmental Sciences, and director of Rutgers Center for Environmental Prediction. His fascination with the weather began during his childhood in Irvington, New Jersey, where snowstorms and unusual weather events captured his interest. With the desire to study meteorology, a high school guidance counselor steered him to Cook College, where he enrolled in 1973. “Although my first-year courses didn’t include meteorology, I found my way to the small, nondescript building (now known officially as 80 Nichol Avenue) that then housed the meteorology program,” he says. “The professors and students made me feel welcome there, and I would spend time between classes looking at the weather maps—posted on the walls in those pre-internet days—and discussing upcoming weather events. One of my professors was Jim Miller, who was (and still is) an excellent source of advice. I had the opportunity to do research, which would become a central part of my professional career.” Fast forward several decades, and after 21 years working at a federal research laboratory, Broccoli returned to the campus where his career began. “Many things have changed, including the location of the meteorology program, but the most important one has remained the same,” he says. “When I arrive on campus, it feels like home.”

Clarke is a Rutgers New Jersey Agricultural Experiment Station extension specialist, professor in turfgrass pathology, and director of the Rutgers Center for Turfgrass Science. Clarke started his career as an undergraduate student in the first class of Cook College, which was formerly the College of Agriculture and Environmental Science (CAES). He was also among the first students to live in the Newell Apartments. “1973 was the tail end of the hippie movement, the Vietnam War was coming to an end, and the focus at Cook was on saving the environment,” he says. “There were no personal computers, we used slide rules in class, and if I wanted to analyze data for a class assignment, I had to type it on FORTRAN punch cards and feed them into the mainframe computer.” He fondly remembers Spencer Davis and Eileen Brennan, faculty members who greatly influenced his life and helped shaped his graduate experience at Rutgers. “Dr. Davis taught the Plant Disease Diagnostic Course that I have taught now for over three decades. He inspired me to become an extension specialist and was a tremendous role model,” Clarke says. “Dr. Brennan was my graduate adviser who helped me develop my expertise in plant pathology. I owe a lot to these wonderful people as well as C. Reed Funk, the father of the Rutgers Turfgrass Program, who helped me grow into my current role as director of the Rutgers Center for Turfgrass Science.”

Malinowski is a professor of animal sciences and director of the Rutgers Equine Science Center. When she applied to Rutgers for the fall semester of 1971, she had to enroll at Douglass College, and then transfer to CAES in 1972—the year Rutgers became coeducational. In fact, her graduating class of 1975 was the first with females enrolled. Malinowski recalls those who inspired her, as well as some of the roadblocks she encountered along the way. “The professor who influenced my career path was Ralph Mitchell, who taught the Introduction to Animal Science course and animal genetics,” she says. “He also was the adviser of the newly formed Animal Science Club which my classmate, Diane Simoncini CC ‘75, DVM Cornell ‘80, and I formed as its first president and vice president respectively, after the adviser of the pre-vet club made it very clear that female students were not welcome. Dr. Mitchell and Dean Charlie Hess told us to form the new club, and to welcome any students interested in animal sciences.” Malinowski noted, “What has changed at the Cook Farm is the fact that we now have horses which are used for teaching, research, and outreach programs. I know a lot about cows because we did not have the opportunity to work with horses in the early 1970s.” Malinowski played a key role in the school’s transition to equine–in the early 1980’s when the beef herd at the Ryders Lane Farm was sold, it was replaced with a herd of Standardbred mares for her doctoral project.