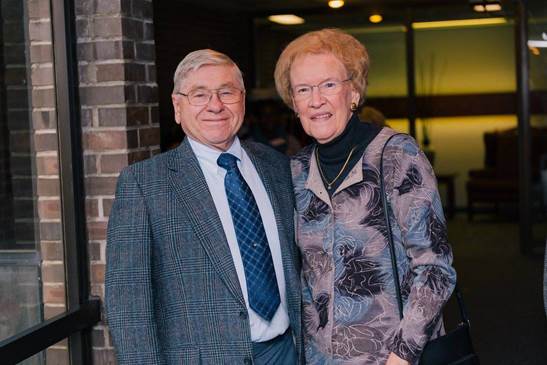 Helen (Januszewski) Kupcho, 86, passed away peacefully on October 9, 2020, after a long battle with kidney cancer. She served as the administrative assistant for Rutgers Cooperative Extension Department of Agriculture and Natural Resources (ANR) for 17 years, 1980-1997. Helen was predeceased by her husband John (Jack) Kupcho, former chair of ANR who passed away earlier this year in May.

Helen was born in Sayreville, NJ on March 29, 1934 to Joseph and Stella Januszewski and graduated from Sayreville High School in 1951. After high school she was employed by Rutgers University for two years, then at Johnson & Johnson–­New Brunswick as a secretary until 1960 when she took time off to raise her two daughters. Helen volunteered with the Franklin Township Public School system when her children attended school there.

In 1969, she returned to the workforce part-time, working again for Rutgers at the College of Agriculture and Environmental Science (now School of Environmental and Biological Sciences). In 1975, Helen began working for Rutgers full-time, working in various positions as a clerk stenographer, secretary, and principal secretary in the Departments of Horticulture and Animal Sciences, and ultimately as administrative assistant with Rutgers Cooperative Extension Department of Agriculture and Natural Resources (ANR) on Cook campus until she retired in 1997.

Helen remarried in 1993 to John “Jack” Kupcho, former Essex County Agricultural Agent and former Chair of the Department of Agriculture and Natural Resources (ANR). They spent 27 years together working, traveling, and caring for each other until his death in May, 2020.

Helen was highly regarded by her colleagues on the Cook campus who recalled how she dealt with challenges by working through issues to find solutions, always with a smile and never a complaint. Her colleagues considered her a kind person with a great deal of compassion. Helen and Jack were regarded as a delightful couple, dealing with administrative challenges with a smile, and dedicated to Rutgers Cooperative Extension and New Jersey agriculture.

Information on funeral arrangements and her obituary are available at: https://www.spezzifuneralhome.com/memorials/helen-kupcho/4354105