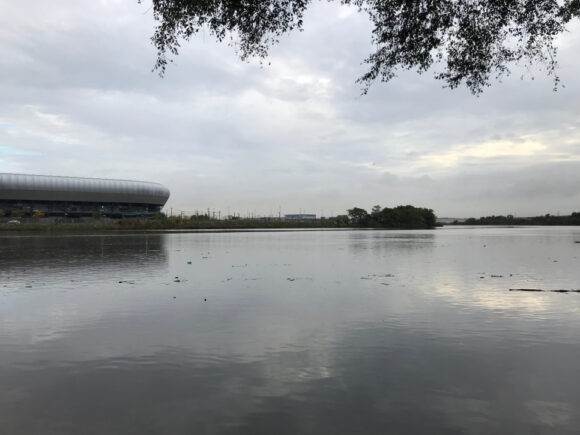 Bacteria that can help defuse highly toxic dioxin in sediments in the Passaic River – a Superfund hazardous waste site – could eventually aid cleanup efforts at other dioxin-contaminated sites around the world, according to Rutgers scientists.

Their research, published in the journal Environmental Science & Technology, needs further work to realize the full potential of the beneficial bottom-dwelling microbes.

“The bacteria-driven process we observed greatly decreases the toxicity of dioxin,” said senior author Donna E. Fennell, a professor who chairs the Department of Environmental Sciences in the School of Environmental and Biological Sciences at Rutgers University–New Brunswick.

“Our results showed that although the process is quite slow, it can be enhanced and may even have the potential to remove all toxic chlorines from the compound,” said lead author Rachel K. Dean, a Rutgers doctoral student.

In a process known as dechlorination, the bacteria remove chlorine atoms from 2,3,7,8-Tetrachlorodibenzo‑p‑dioxin (TeCDD), the most toxic of the many dioxins, according to the study.

These chemicals can cause cancer, reproductive and developmental problems and immune system damage, according to the U.S. Environmental Protection Agency. They also can interfere with hormones in the body.

In New Jersey, the decades-old Diamond Alkali Superfund site includes a former chemical manufacturing facility in Newark, a 17-mile tidal stretch of the Passaic River and tributaries, Newark Bay and portions of the Hackensack River, Arthur Kill and Kill van Kull, according to the EPA.

The 2,3,7,8-TeCDD dioxin is a byproduct of combustion and chemical product manufacturing, including the herbicides in Agent Orange. Sampling revealed high levels of dioxin in 1983 and the site landed on the Superfund National Priorities List a year later. Dioxin, polychlorinated biphenyls, metals, polycyclic aromatic hydrocarbons and pesticides were found in sediment in the Lower Passaic River.

Though dredging is required to remove the most highly contaminated sediments in the Passaic River, some contamination has spread and will remain in the river and estuary, where it could be transformed by the bacteria over time, according to the Rutgers scientists.

In the study, scientists took solid material from the river bottom and mixed it with water and other nutrients in the lab to make mud in bottles. Then they added 2,3,7,8-TeCDD and another chemical (dichlorobenzene) that boosted dechlorination by bacteria.

The Rutgers scientists revealed bacteria that are likely involved in the dechlorination process – a novel Dehalococcoidia bacterium – by sequencing their DNA from the dioxin-tainted mud. It is possible that 2,3,7,8-TeCDD could be completely dechlorinated in the Passaic River and estuary.

The next goal is to try to identify the enzymes involved in dechlorination so cleanup technologies could be developed that lead to more dechlorination at this and other contaminated sites, the study says.

Rutgers co-authors include Cassidy R. Schneider, who earned bachelor’s and master’s degrees at Rutgers; Haider S. Almnehlawi, who is earning a doctorate at Rutgers and is a faculty member at Al-Muthanna University; and Professor Katherine S. Dawson, an assistant professor in the Rutgers Department of Environmental Sciences.