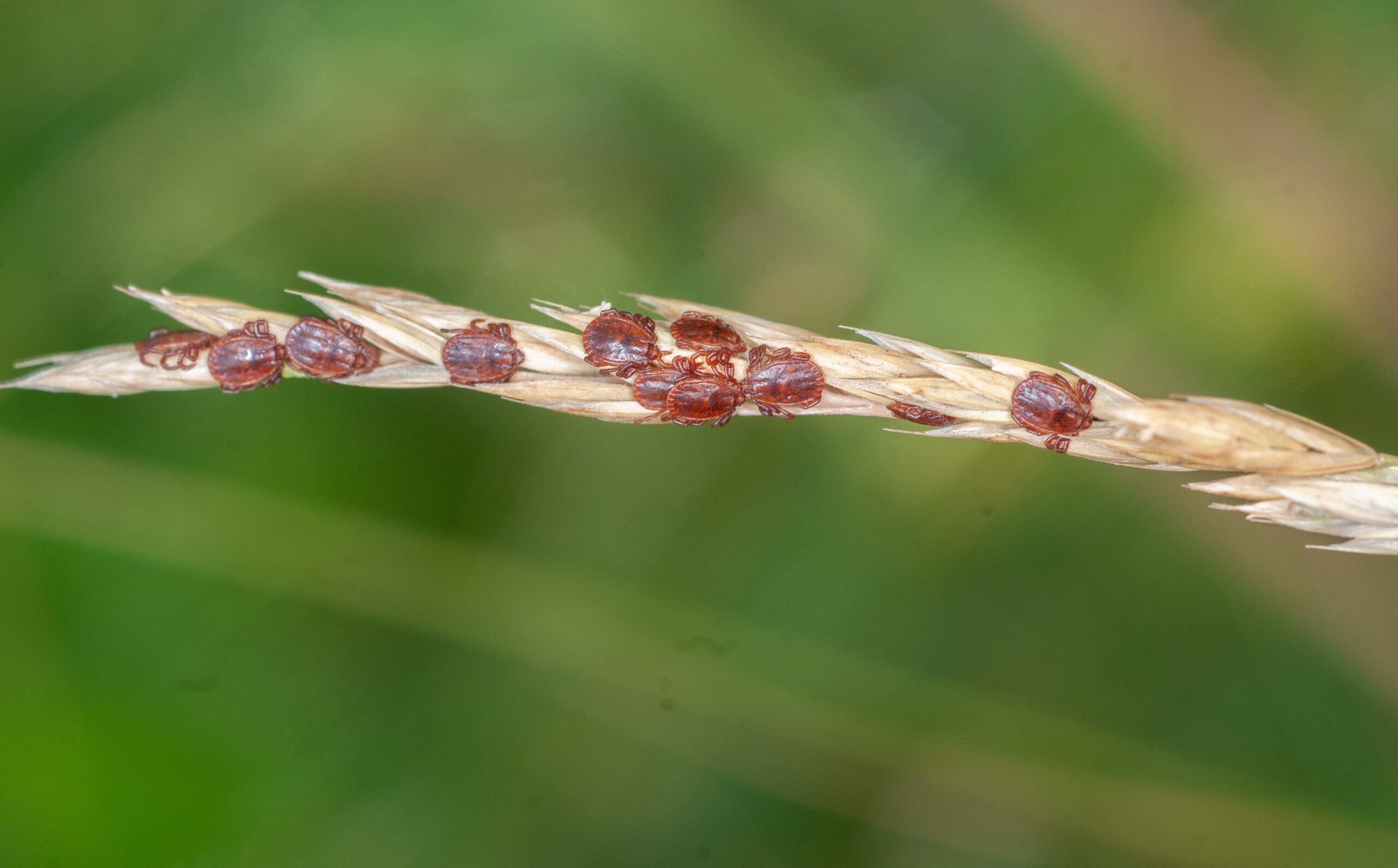 Adult female Asian longhorned ticks attached to vegetation and waiting for a host to come by. Photo: Jim Occi.

The invasive population of Asian longhorned ticks in the United States likely began with three or more self-cloning females from northeastern Asia, according to a Rutgers-led study.

Asian longhorned ticks outside the U.S. can carry debilitating diseases. In the United States and elsewhere, they can threaten livestock and pets. The new study, published in the journal Zoonoses and Public Health, sheds new light on the origin of these exotic ticks and how they are spreading across the United States.

“While additional samples from the tick’s native range are needed to pinpoint more exactly the source of the U.S. introduction, our data suggest that they came from one or more locations in northeastern Asia – either through a single introduction of at least three ticks or as multiple introductions from different populations,” said lead author Andrea M. Egizi, a visiting professor in the Department of Entomology at Rutgers University–New Brunswick and a research scientist with the Monmouth County Tick-borne Diseases Laboratory hosted by the Rutgers Center for Vector Biology.

In 2017, Rutgers Center for Vector Biology and other researchers detected an infestation of the Asian longhorned tick (Haemaphysalis longicornis), which is native to East Asia, in New Jersey. It was the first time established populations of this species had been detected in the United States. Subsequent investigations found the tick to be widespread in the eastern U.S. Rutgers researchers discovered it has been present in New Jersey since at least 2013.

Although this species transmits serious illnesses to people and animals in other countries, experts don’t know whether the tick populations in the United States will make people sick, according to the U.S. Centers for Disease Control and Prevention.

The species has two forms: one with males and females, and one with self-cloning females that lay eggs without needing to mate, a process called “parthenogenesis.” The self-cloning form, free from the need to look for mates, are especially likely to thrive and spread. A single female can establish a fast-growing population. This type entered Australia and New Zealand in the early 1900s, and now causes significant losses in the cattle industry.

Rutgers Center for Vector Biology researchers enlisted about 25 collaborators at 20 institutions to get samples of Asian longhorned ticks across the United States and internationally, and used gene sequencing to detect genetic similarities and differences between various populations.

Their findings indicate that at least three individual ticks, from self-cloning populations, were brought to the United States, which explains why all adult Asian longhorned ticks found in the U.S. so far have been female. Overall, U.S. ticks are more likely to have come from an East Asian country (or countries) than from Australia and New Zealand.

As part of the study, the U.S. Department of Agriculture Animal and Plant Health Inspection Service, Veterinary Services found evidence that these ticks traveled within the United States on wildlife as well as through the transport of pets or livestock.

“One thing we uncovered is the ease with which pets, especially dogs, can accidentally help ticks cross international borders and state lines,” said senior author Dina M. Fonseca, a professor and director of the Center for Vector Biology in the Department of Entomology in the School of Environmental and Biological Sciences. “Many countries require dogs to be treated for ticks and other parasites before entering the country, but the United States does not. We urge greater awareness of this issue to prevent future exotic tick introductions.”