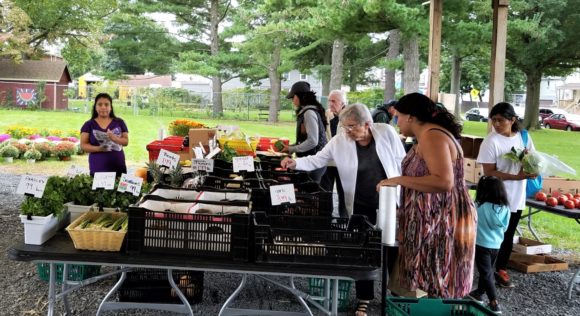 Maria was stuck, looking at the near-empty refrigerator when Rosa burst through their apartment door, her dark pigtails swinging and her large, brown eyes brightening upon seeing Maria. “Mama!” she exclaimed, “today we made VEGGIE friends!” Rosa proudly displayed the sock puppet on her left hand: an orange sock, with green squiggly ribbon for hair and lop-sided buttons for eyes. “Mine’s a CARROT!” Rosa had been learning about healthy eating at school, and Maria wanted to help her daughter try some of the things she’d been talking about. As Rosa, using her best sock puppet carrot voice, told Maria how good carrots are for her eyes, Maria sighed and put on her coat; they were going to the grocery store.

Amidst the aisles of crisp, brightly colored fruits and veggies, Rosa was delighted. “Mama!” she squealed, “here is a PURPLE apple!” Maria, however, was less exuberant, as her eyes were drawn more closely to the prices printed on the shelf stickers. When her gaze returned to their shopping cart, Maria realized that Rosa had already collected a variety of fruits and vegetables and proudly settled them into a pile near the center of the cart. As Rosa continued to chatter, Maria sighed again. “We better head to the checkout.”

Rosa watched closely from the end of the checkout counter, hands outstretched as the clerk keyed in the produce codes and slid her prized fruits toward the grocery bags where she waited; Maria, however, was watching their sales total get higher and higher. “Eighteen, fifty-three,” the clerk told Maria, whose fingers held equally tight to her wallet in one hand, and her EBT card in the other. She swiped the card, and saw the clerk’s frown almost before “DENIED” flashed on the screen of the card reader. She didn’t have enough.

Rosa had already bagged much of the produce, so Maria, after exchanging uncomfortable glances with the clerk, pulled a bunch of bananas, a cantaloupe, and, with only a slight pause, the purple “Black Oxford” apples, back toward the register. “Maybe, without these?” she asked the clerk, with equal parts hope and defeat in her voice. The clerk began to remove the fruits from Maria’s tab, while the customer now in line behind Maria looked pointedly at her watch. “Fourteen, seventy-two.” Maria re-swiped her card, entered her pin, “APPROVED” flashed across the screen, and Maria sighed, this time with relief, until she saw how far Rosa’s smile had fallen. 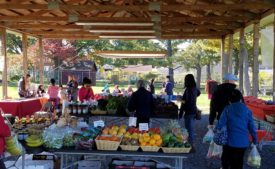 Local and tropical produce is available at the NBCFM to meet the diverse food preferences of the New Brunswick community.

Maria adjusted the grocery bags so their weight was equally balanced between her two hands as she left the store and rounded the corner to begin their walk home, with Rosa shuffling slowly behind her. At the fourth intersection, where they had to wait for the light to turn green before they could cross through the Monday evening commuter traffic, Rosa repeatedly scuffed the toe of her sneaker into the pavement, but something caught Maria’s eye. She had seen the logo before; it was a square-sided apple with red, blue, yellow, and green stripes that said ‘New Brunswick Community Farmers Market,’ but this flyer was different. “DOUBLE YOUR SNAP!,” it said, in large letters that seemed to lift off the page as the light turned green.

By the time they arrived at their apartment, Rosa’s spirits seemed to lift a little, and she began to paw through the bags Maria had hefted onto their kitchenette counter. The carrots had made it, which pleased Rosa and her sock puppet, and they had managed to keep the oranges and grapes as well. With the hand that was not occupied by the puppet, Rosa stocked the small fridge while Maria opened up the web browser on her cellphone. “n e w b r u n…” she slowly began to type, until eventually “New Brunswick Community Farmers Market” appeared as an option for her to click. There it was again: DOUBLE YOUR SNAP!, right on the home page. “There’s got to be a catch,” Maria thought to herself, as she read on until, Aha!, there it was… DOUBLE YOUR SNAP, up to $10 per day. “See,” Maria, a skeptic, thought to herself, but only for a second while she did the math. “Doubling $10 means I’d have $20,” she thought, while Rosa resumed chattering in the background. “That would have been enough for what we wanted.”

With a glance out the third-floor window, her eyes looking past the chipping paint and narrow wooden staircase to rest on the streets beyond theirs, Maria wondered how to make it happen. Wednesdays the market was on Albany Street, and that was a hike from their apartment, but as her eyes drifted back to her cellphone screen, she saw the rest of the schedule and recognized Jones Avenue. “That’s not far!”

“Mama, what?” Rosa replied to Maria, who hadn’t realized she’d spoken out loud. Not wanting to get Rosa too excited, Maria told her, “Nothing,” but already Maria was thinking about how their upcoming month’s SNAP benefits should load onto her card by Thursday, and the market was on Saturday.

The weekend was slow in coming, and Maria, who had worked a double shift in the office building where she cleaned on Fridays, put on a bigger pot of coffee than usual. It wasn’t until Rosa, still in her favorite yellow pajamas and rubbing her sleepy eyes with her sock puppet, came into the kitchen that she remembered. The Market! Taking a cue from Maria, Rosa perked up when she saw her mom smile. “I have a surprise.” Maria told her.

Maria triple-checked that her EBT card was tucked in her wallet before they left the apartment. “Rosa, take this!” she exclaimed, passing her daughter her small hooded sweatshirt on their way out the door; it was September, and the air was already crisp in the morning. They made their way down the stairs and onto the sidewalk. Jones Avenue was only a couple of blocks from their apartment; closer than the grocery store. The cool air felt refreshing as they walked, and it wasn’t long before the brightly colored flags and banners that had been set out for the market day caught Rosa’s eye. “Mama! What’s over THERE?!” “Let’s go check it out,” Maria smiled. 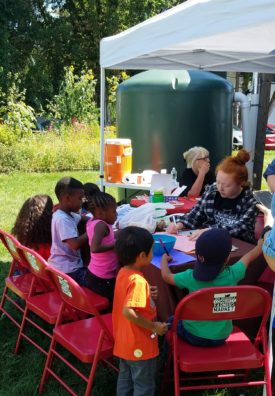 A collaboration between the NBCFM and the Piscataway Elks Club supported an expansion of youth activities at the markets in 2019.

A line of brightly colored flags, flapping in the light morning breeze, led from the street across a grassy lawn and over to a large wooden pavilion, beneath which there was a bustle of energy. There were lots of tables full of fruits and vegetables; Maria noticed apples, tomatoes, garlic, and jalapenos, and she was pleasantly surprised to see a few things she didn’t expect, like mangoes and avocados. A few tables didn’t have produce; at one, Maria could tell from the hand-written sign that a man was having a free blood pressure reading. At another, a woman was handing out small paper cups. As Maria got closer, she saw they were full of apple slices to try! As Rosa crunched happily on the apple slices, other shoppers were chatting to one another throughout the market. Maria recognized one of the women standing near a heaping pile of freshly picked sweet corn, peeling the husks into paper bags next to the pile, at the same time Rosa spotted Julia, her daughter, from school. “Rosa!” Julia exclaimed, running over and taking Rosa by the hand. “I’ll show you the chickens.” Julia led Rosa to a fenced enclosure, where three golden-colored hens pecked and scratched at the grass. “Like this,” Julia said, as she plucked a piece of clover from the lawn and pushed it through the fencing; almost immediately a delighted hen gobbled it from her hand, as both Julia and Rosa beamed.

Maria made her way through the rest of the market tables slowly, her eyes fixed first on the fruits, then bunches of herbs, and finally on the bright orange marigold flowers growing alongside the pavilion. As she looked up, a friendly face above a red t-shirt with the market’s apple logo on the front caught her eye. “Hi!” the young woman said. “Hola,” Maria, who spoke very little English, quietly responded by default. The young woman replied, “Bienvenidos al Mercado! Aceptamos SNAP y WIC, y duplicamos el valor de su SNAP hasta $10 por día.” Maria’s eyes widened and she exhaled with relief as she asked, “Se habla Espanol?” “Si, hablamos Espanol aqui,” replied the market clerk, who went on to explain to Maria in detail, in Spanish, how she could shop using her SNAP benefits, which would indeed be doubled in value. Maria listened with intent; they even had a frequent shopper program, so Maria could earn additional vouchers to spend at the market the more often she came to shop!

Realizing with a start that Rosa was no longer near the chickens with Julia, Maria looked around quickly and saw her huddled around a table with a few other children. Maria thanked the woman, who handed her a red tote bag to use for her produce and made her way over to Rosa. “Mama! This is MY PLATE, and I’m drawing healthy foods!” Maria, relieved, smiled gratefully at the woman leading the children in the coloring activity, which she realized was reinforcing some of the healthy eating lessons Rosa had learned in school, and went back to the produce tables. Rosa joined her, and together they found the fruits and vegetables Rosa had drawn on her plate and placed them into the tote bag.

The NBCFM welcomes local organizations to table at the market, promoting local health, wellness, and educational services to the community.

As they approached the checkout, Maria felt the all too familiar tightening in her gut as she started to put the items on the table, but then she sighed. “You’re okay,” she told herself. “You did the math.” Instead of having prices set by the pound, Maria had noticed while she was shopping that the items were priced according to how many you bought: $3 for a quart of plums, $1 for a pint of radishes. Nothing had to be weighed, so Maria could add up the prices as she shopped; this meant no surprises at the register, and that was a good thing. The farmer, who smiled kindly at them as he rang up the produce, told Maria the total, “Sixteen dollars.” Maria handed him her EBT card, and he knew just what to do: since the value of SNAP is doubled, he charged her card only eight. While Rosa packed their fruits and vegetables back into the tote bag, Maria entered her PIN number to complete the transaction, saying wholeheartedly, “Muchas gracias.”

As they made their way to the sidewalk to head home, Rosa turned and waved to Julia, who was now at the checkout with her mom. “Mama, next week, let’s get a WATERMELON!” she told Maria, already planning their return trip to the market. Maria only hesitated for a moment to think about how she’d pay, and then carry the watermelon back to their apartment, before remembering the tote bag in her hand. “Watermelon it is,” she smiled.

The New Brunswick Community Farmers Market will be open for the 2020 season in June.

Note to the reader: Though Maria and Rosa represent actual experiences, they are fictional composite characters whose creation was based on the anecdotal and observed experiences of multiple community members whose names are not included in this story.