Citing rising temperatures, shrinking ice caps, and excessive greenhouse gases, international leaders in the fight against climate change spoke both defiantly and dispiritedly at a conference in Madrid about the lack of progress world powers who signed on to the Paris Agreement have made in preventing global warming from savaging the Earth.

Yet, at the end of the two-week conference in December 2019, little had been agreed upon except that countries should come up with plans for more stringent limits for carbon emissions by next year’s conference. However, the European Union did pledge to carbon neutrality by 2050. 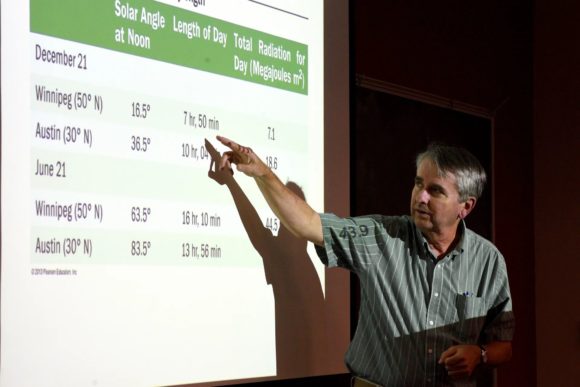 NJ State Climatologist David Robinson has been a professor of geology at Rutgers University since 1988. Photo: Amy Newman/NorthJersey.com.

David Robinson, an EOAS faculty member who also holds the position of New Jersey State Climatologist, [which is housed at the New Jersey Agricultural Experiment Station] expressed concern about the lack of overall forward movement.  “I don’t see progress being nearly made at a pace to avoid ongoing and amplified climate change as the 21stcentury progresses,” he said in an email in response to questions.

Early in the series of meetings, known as the 25th Conference of the Parties, or #COP25, the U.N. Secretary-General, António Guterres, warned: “By the end of the coming decade we will be on one of two paths. One is the path of surrender, where we have sleep-walked past the point of no return, jeopardizing the health and safety of everyone on this planet. Do we really want to be remembered as the generation that buried its head in the sand, that fiddled while the planet burned? The other option is the path of hope, a path of resolve, of sustainable solutions. A path where more fossil fuels remain where they should be — in the ground — and where we are on the way to carbon neutrality by 2050.”

He and Petteri Taalas, the World Meteorological Organization (WMO) secretary-general, created a somber atmosphere for the proceedings with their introductory remarks. The annual conference drew experts, heads of government and delegates totaling around 22,000.

“If we do not take urgent climate action now, then we are heading for a temperature increase of more than 3°C by the end of the century, with ever more harmful impacts on human well-being,” said Taalas. “We are nowhere near on track to meet the Paris Agreement target.” The 2015 Paris Agreement set an end-of-the-century target to prevent global temperatures from increasing more than 2°C, but ideally, the target is no more than 1.5°C.

Young activists, especially, took the lead, expressing their frustration, and marching in protest. The climate activist Greta Thunberg of Sweden spoke at a session.  “Finding holistic solutions is what the COP should be all about, but instead it seems to have turned into some kind of opportunity for countries to negotiate loopholes and to avoid raising their ambition,” said Thunberg.

Robinson said that dangerous climate trends cannot be averted. “As for a reversal of the trends, well I’m truly not an eternal pessimist but at best I think we may be able to reduce the trends as the century continues, not stop them, let alone reverse them.”

The United States, the nation that emits the second-largest amount of greenhouse gases, is pulling out of the Paris agreement at the behest of President Donald Trump. The Agreement itself has no enforcement power, and countries can set their own limits for reducing greenhouse gas emissions.

Negotiations surrounding setting timelines for implementation are contentious. The major sticking point in Madrid surrounded what is referred to as “Article Six,” which determines how countries can work together to meet their environmental targets. This largely takes the form of carbon emission credits whereby one country, if doing well on its target goals, can sell its “credit” to another country that is having difficulty hitting its target.

While countries make their dire predictions and quibble over their responsibilities, catastrophic hundred-year weather events have become commonplace. Among the findings recently reported by the WMO:

In light of the catastrophic developments reported in the last few years, Robinson said that “Time is running out to stave off major change in the second half of this century, but opportunities remain to tackle this critical global issue of climate change through mitigative actions, recognizing that adaptive ones will be necessary too.”

Asked what people can do in their everyday lives to prevent global warming, Robinson said, “Individuals can set examples by reducing their use of energy and turning to greener (non-fossil fuel) sources for their energy needs.”

He added, “They can also participate in grassroots organizations that help spread the work on being responsible environmental stewards.  Perhaps even take a leadership role from time to time. Also, they can vote.”

Robinson noted that while small-scale actions can help, they won’t be enough. “This problem won’t be well enough addressed just through personal behavior and local actions, thus the need to keep it in the spotlight on the city, state, national and international levels.”

Next year’s conference in Glasgow will mark five years since the climate agreement was signed and 73 nations announced that they will take further actions to mitigate climate change. Some of the world’s largest emitters with major economies have been silent on their plans thus far.

“We are a very long way behind but there is still reason to believe we can win this race,” Guterres said at the conference. “On our side, we have the force of science, new models of cooperation and a rising tide of momentum for change.”

In a tweet after the conference ended Sunday, Guterres expressed both his negative response to the conference and his hope for the future: “I am disappointed with the results of #COP25. The international community lost an important opportunity to show increased ambition on mitigation, adaptation & finance to tackle the climate crisis. But we must not give up, and I will not give up.”

Editor’s Note: This content first appeared on the Rutgers Institute of Earth, Ocean, and Atmospheric Sciences website. The article was written by Craig Winston, research writer and editor, Rutgers School of Communication and Information.