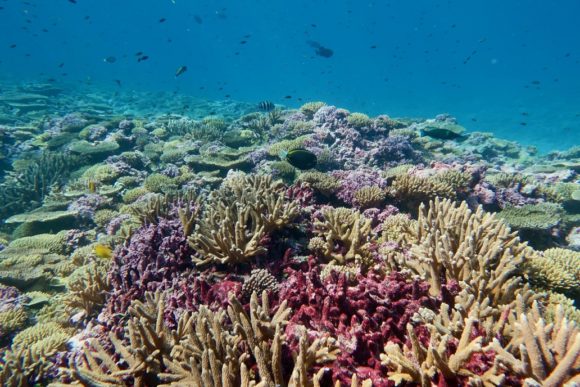 Corals, which are threatened by global climate change and ocean acidification, support a wide range of reef fish at Baker reef in the Pacific Remote Islands.
Photo: NOAA Fisheries/Morgan Winston

Seafood production also may be impacted by increased acidification

A nuclear war that cooled Earth could worsen the impact of ocean acidification on corals, clams, oysters and other marine life with shells or skeletons, according to the first study of its kind.

“We found that the ocean’s chemistry would change, with global cooling dissolving atmospheric carbon into the upper ocean and exacerbating the primary threat of ocean acidification,” said co-author Alan Robock, a Distinguished Professor in the Department of Environmental Sciences in the School of Environmental and Biological Sciences at Rutgers University–New Brunswick.

The study is published in the journal Geophysical Research Letters.

Scientists looked at how climate changes stemming from nuclear war would affect the oceans. They used a global climate model in which the climate reacted to soot (black carbon) in smoke that would be injected into the upper atmosphere from fires ignited by nuclear weapons. They considered a range of hypothetical nuclear wars, including a relatively small one between India and Pakistan and a large one between the United States and Russia.

Excess carbon dioxide from the burning of fossil fuels enters the ocean and reacts with water to form carbonic acid, which decreases ocean pH (makes it more acidic) and lowers levels of carbonate ions. Corals, clams, oysters and other marine organisms use carbonate ions to create their shells and skeletons, according to the National Oceanic and Atmospheric Administration. A more acidic ocean makes it harder to form and maintain shells and skeletons.

The massive amount of smoke from a nuclear conflict would block sunlight and cause global cooling. The cooling would temporarily boost the pH in the surface ocean over five years and briefly lessen the decline in pH from ocean acidification. But the cooling would also lead to lower levels of carbonate ions for about 10 years, challenging shell maintenance in marine organisms.

“We have known for a while that agriculture on land would be severely affected by climate change from nuclear war,” Robock said. “A lingering question is whether the survivors could still get food from the sea. Our study is the first step in answering this question.”