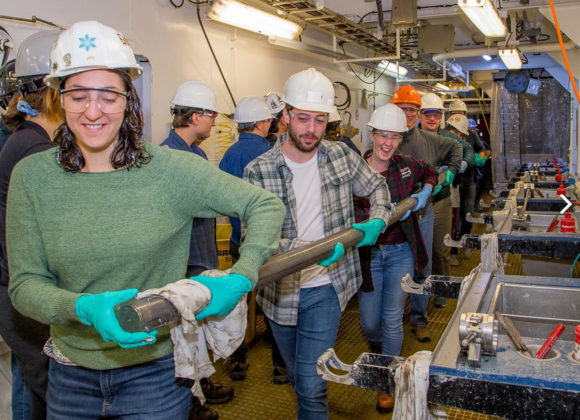 This past summer, Samantha Bova, Rutgers post-doctoral researcher, and Yair Rosenthal, distinguished professor in the Department of Marine and Coastal Sciences, led a team of 33 international scientists on a month-long ocean expedition to the Chilean Margin in the southeast Pacific aboard the JOIDES Resolution, a research vessel that drills into the ocean floor to collect and study core samples.

Bova is the principal investigator while Rosenthal is co-PI on the NSF-funded project, “Extending high resolution paleoclimate records from the Chilean Margin to the Eemian.” The project is intended to study the oceanographic and hydrologic history of this part of the southeast Pacific, home to the Northern and Southern Patagonia Icefields–the largest temperate ice masses in the Southern Hemisphere–which contribute disproportionately to modern sea level rise relative to other mountain glaciers. 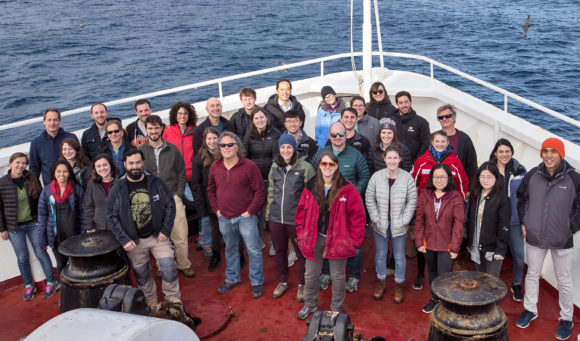 The expedition, which sailed out of Punta Arenas, Chile, is the first in the new NSF-funded JR100 program. Its goal is to provide the U.S. paleoceanographic community with a new way of recovering long sediment records up to 100 meters below the sea floor. Eight sites along the southern Chilean Margin (36-46.5°S) were cored, recovering a total of 2232 m of sediment cores over the course of the expedition. The cores will enable the study of links between oceanographic change at the northern edge of the Antarctic Circumpolar Current and climate change on the South American continent over one glacial-interglacial cycle and two glacial terminations.

The next step in the research is to evaluate rapid, 100- to 1,000-year, changes in ocean water chemistry, composition and temperature. This process will help to reconstruct climate over the last 200,000 years and lead to important findings about how the Earth will respond to a warmer than current climate.