The Department of Marine and Coastal Sciences along with 4-H Department of Youth Development and Rutgers Cooperative Extension with a grant from AT&T, launched a “Marine Science Family Night” at Greater Brunswick Charter School on May 30. 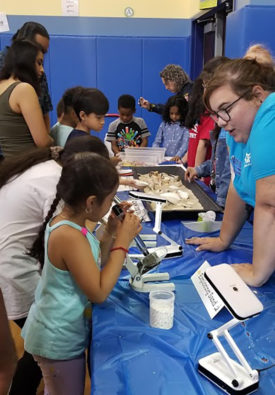 Students and parents enjoy one of the many event stations at “Marine Science Family Night” at Greater Brunswick Charter School.

As part of a broader series called “Family Science Nights” that was launched by Rutgers–New Brunswick to engage the local community in science learning, the marine-themed event featured a real-life penguin from Jenkinson’s Aquarium as an interactive way to discuss the zoology of penguins with excited students and parents.

In addition, the event focused on the glider technology used by scientists to collect ocean data as well as an examination of sand and shells, and various marine life. There was even a station touching on the issue of micro-plastics in the ocean, where students received a reusable straw after completing the station.

These hands-on activities were used to communicate the excitement of oceanography and marine science to students, but more broadly to inspire the participation of young scientists in research.

Studies have shown that family involvement in children’s science activities is linked to many benefits including improved homework completion, report card grades, achievement test scores and attitudes towards science. These benefits drive the need for school districts to continue to seek family involvement, in particular for children from urban communities.

In New Brunswick, Rutgers scientists have teamed up with the local school district to develop a series of Science Family Nights, which was launched on April 10 with a program titled, “Exploring Life on Other Planets,” at McKinley School. This series sets out to inspire and engage the next generation of science-informed students and to break down barriers to science learning and engagement. New Brunswick High School provided bi-lingual student volunteers to assist with translations for the families.