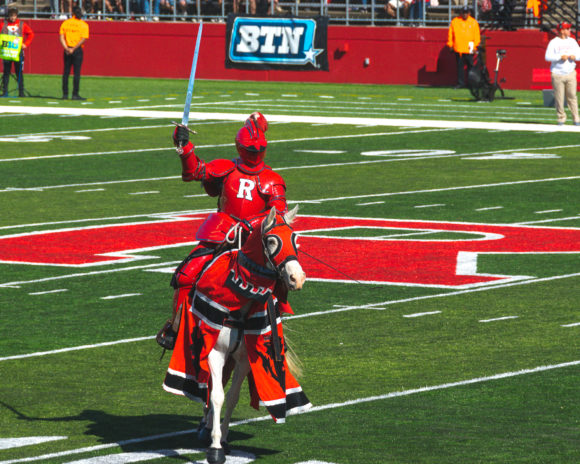 The Scarlet Knight has had a few different iterations since joining the Rutgers Football Team. Kennis “Buttons” Fairfax is one of the Knights in rotation during football games, and even if he isn’t riding the horse during the game, Fairfax can be found as part of the team that gets the horse ready, only having missed one game in the last 25 years.

This story is excerpted from Equine Science Quarterly, Winter 2019.

From a young age Kennis “Buttons” Fairfax developed a strong connection to his family, and what it really meant to be a contributing member.

When she moved to New Jersey to live with Fairfax’s uncle, it was only natural that he followed. Each summer though, he would travel from New Jersey with his grandmother to help relatives in Georgia and Oklahoma. 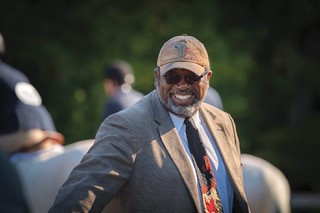 This tradition started when he was around five years old, and would serve as a foundation for his personal views. “She was the bond that I would say held me together; teaching me values, morals, and respect,” said Fairfax, “I will always appreciate her for assisting my mother with raising me.”

It was also during these trips that Fairfax developed a deep love for horses (as well as other four-legged friends).

“My grandmother used to tell the story of how I always loved horses, and during our trips I would swing from the mules’ tails in the fields,” said Fairfax, “they would never kick … maybe they were just as infatuated with me as I was them?”

His family owned plots of land in both Georgia and Oklahoma, and his job during these summer trips included caring for the horses and mules that were used for farming on the family’s many acres.

During the school year, back in New Jersey, Fairfax also developed a passion for the arts, as well as sports, which ultimately lead him to a successful career as a teacher, mentor and coach at Arts High School in Newark, the nation’s first public high school for the arts.

While Fairfax’s pursuits in his own education and career incorporated a balance of his interests of sports and the arts, his love for horses remained a part of his life, and he eventually became known internationally as a clinician and judge in the Western horse world.

“Each day I wake up knowing that my purpose in life has not been fulfilled, and that there are more lives I can touch and encourage to reach their full potential,” says Fairfax, “my love for horses has helped me through many adventures and journeys (we will call them) in my life.”

Fairfax jokes that he hates people but loves horses, so trying to bridge the gaps between people communicating with their horses is something that he enjoys, both for the betterment of the person and the horse.

“When working with horses that you have successfully communicated with…, there is a sense of accomplishment within them as well.”

One such connection was formed through an interesting idea about the Rutgers Football Team around 25 years ago.

Fairfax had been invited to Rutgers to judge the Horse Show at “Ag Field Day” (now a part of the University wide “Rutgers Day”) and was approached by a man who thought that the Rutgers Football Team needed a little something to stand out during the games.

This man, Jorge Hernandez, would work with Fairfax to create the image of the Scarlet Knight at football games; one of a battle-ready knight riding into the stadium on horseback to conquer.

“His first reaction was ‘let’s get this done,’” says Hernandez, “he was all in.” 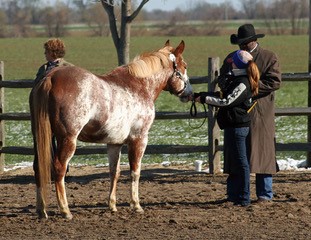 While Hernandez took the lead, it was the “Alum-Nuts” as they call themselves; a group of Rutgers alumni, Cook College alumni, Livingston alumni, and even a few Rutgers staff members; that came together to make this happen.

Hernandez also wanted to be sure that this was done safely, and that an experienced rider would be donning the Knight’s armor. After some convincing, it was decided that Fairfax would be the perfect candidate to take the field.

For the next 25 years, this image became the embodiment of a Rutgers Football Game.

“I would have never done this without him,” says Hernandez, who owns the current Scarlet Knight’s horse and gets him ready for each game-day. “Without his knowledge of working with horses, and his dedication, this wouldn’t be possible.”

During his time as the Knight, Fairfax, with the help of Hernandez, has used a few different horses, but none are as memorable as Rutgers Equine Science Center’s very own Lord Nelson.

“One of my favorite Lord Nelson stories wasn’t the 15-yard penalty, but was when we were filming a TV spot and were standing about 3 feet from the cannon on the hill,” says Fairfax. “The cannon went off and Nelson just stood there and looked at the smoke rings. Never moved, just looked as the smoke rings vanished then looked at the cannon to see if it was going to do it again.” 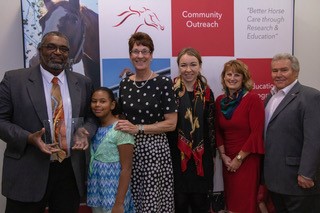 L-R: Fairfax with his daughter Tatiana, and Rutgers Equine Science Center staff and board members Karyn Malinowski, Amy Butewicz, Carey Williams, and Warren Zimmerman, after receiving the 2019 “Spirit of the Horse” award.

Recently, Fairfax was invited back to Rutgers University to receive the 2019 “Spirit of the Horse” award from the Equine Science Center.

This award is given to those who have made a positive impact on the equine community, helped others to get involved, and whose lives have been changed because of the profound connection between horses and humans.

Awarded at the Center’s “Evening of Science & Celebration” in November 2018, Fairfax was presented this honor by former Governor Richard J. Codey.

Talking about giving back to the equine community, his goal has always been “Helping people to enjoy equine events and activities by giving them a better understanding, whether that is through judging, seminars and clinics, of horses,” says Fairfax. “Realizing that there are so many other things kids and people can and are doing with their time, we in the industry must find ways to bring folks in. We have to make it interesting, understandable, and a great family activity.”