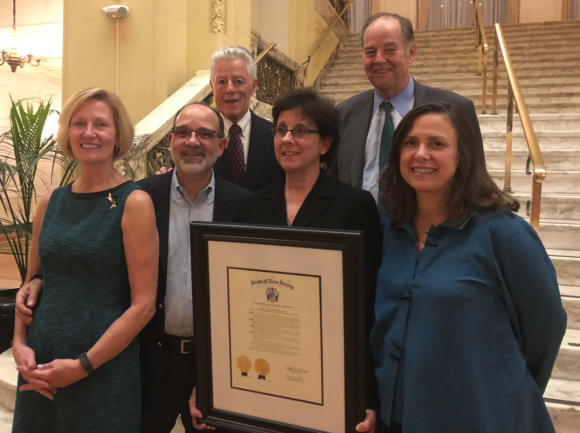 The New Jersey Climate Adaptation Alliance (NJADAPT) received the 2018 Coastal and Ocean Champions Award from the Urban Coast Institute at the institute’s 14th annual reception celebrating 40 years of New Jersey’s Coastal Management Program on Oct. 9 at Monmouth University. The event honored six individuals who have made significant contributions to the program and to the conservation and sustainability of New Jersey’s coastal and marine ecosystems and communities.

Accepting the award on behalf of NJADAPT were New Jersey Governors Thomas Kean and James Florio, who serve as honorary co-chairs of the alliance. NJADAPT is co-facilitated byJeanne Herb, executive director of the Environmental Analysis and Communications Group, Edward J. Bloustein School of Planning and Public Policy, and Marjorie Kaplan, associate director, Rutgers Climate Institute, representing the central role played by Rutgers as a key stakeholder in the process of building capacity in New Jersey.

NJADAPT was also recognized by a joint resolution of the New Jersey legislature praising its meritorious efforts. The sponsors of the resolution were representatives of New Jersey’s 11th Legislative District, Senator Vin Gopal and Assembly members Eric Houghtaling and Joann Downey.

The New Jersey Climate Adaptation Alliance was formed in response to a diverse group of stakeholders who came together in 2011 at Rutgers University to participate in the conference “Preparing NJ for Climate Change: A Workshop for Decision-Makers.” The alliance focuses on climate change preparedness in key impacted sectors, including public health; watersheds, rivers and coastal communities; built infrastructure; agriculture; and natural resources.

In addition to Governors Kean and Florio, the following were among the six NJADAPT honorees: David Kinsey, formerly of NJDEP and a planning consultant, led the team that designed and implemented the New Jersey Coastal Management Program, approved by NOAA in 1978 and 1980, and led the effort that produced New Jersey’s first (and only to date) Shore Protection Master Plan in 1981.

John Weingart, a former division director and assistant commissioner, NJDEP, helped to write and implement New Jersey’s Coastal Management Program and was instrumental in designing and promoting the Hudson River Walkway. He is the associate director, Eagleton Institute of Politics at Rutgers.

Mark Mauriello, a former shoreline mapping specialist with the New Jersey Geological Survey, served as a director of the Division of Coastal Resources and Land Use Regulation Division and commissioner, NJDEP. He is currently a specialist in land use management and regulatory compliance.

Norbert Psuty, professor emeritus, Department of Marine and Coastal Sciences, who has studied beaches and dunes and coastal systems throughout his professional career, and had input to the development of the New Jersey Shore Protection Master Plan. He developed monitoring protocols that are used by the National Park Service in its coastal parks on the East Coast and Gulf Coast.

Mauriello and Kinsey, NJADAPT Advisory Committee members, were also honored as Coastal and Ocean Champions of 2018.