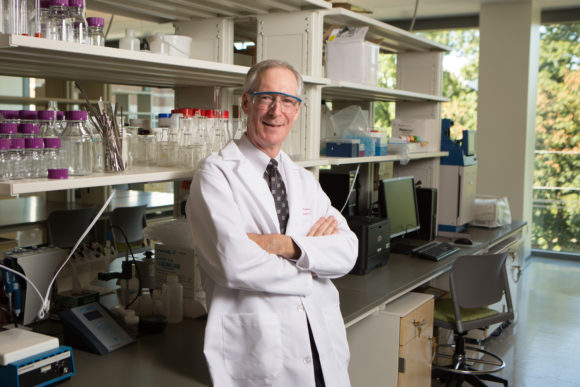 Peter Gillies, who served two terms as the founding director of the New Jersey Institute for Food, Nutrition, and Health (IFNH), retired Oct. 1, after eight years of building and launching the institute. Faculty, staff and students assembled on his last day for a sentimental sendoff.

School of Environmental and Biological Sciences Dean Bob Goodman shared a few words on Gillies’ role, stating that it was Peter’s leadership that brought the Institute to where it is today. “Few will know how complicated, thrilling, and tedious it is, and how much hard work goes into building what’s been built-– not just the building, but also the relationships with people–not just on the campus or in this School, or even at Rutgers-New Brunswick, because this is an enterprise that reaches out to Rutgers Biomedical and Health Sciences, to foundations, and philanthropic donors, and all the students and faculty members.

Gillies joked that it will be strange after 40 years being of a scientist, to wake up the next day as an unpaid scientist. “But, I know you never stop being a scientist.” He recognized that IFNH has given new scientists the opportunity to learn and launch careers, and he concluded, “For that, I’m very proud to have been a part of Rutgers.”

Gillies’ immediate plans involve a temporary relocation to Bend, Oregon, where he will be enjoying skiing, and with his wife, relishing their roles as grandparents, while visiting their son, daughter-in-law and grandson.

Toward the end of his term, Gillies had shared his reflections on the journey of founding the Institute. Read more here.