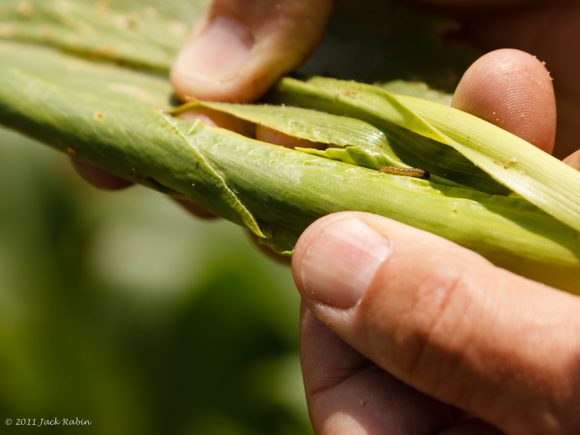 European corn borer found in an ear of sweet corn through field scouting by the NJAES Vegetable IPM program.

A Mid-Atlantic multi-state study compared the rate of European corn borer and corn earworm damage before and after introduction of Bt-field corn usage on other non-Bt crop fields. The study was published March 12 in the Proceedings of the National Academy of Sciences. Kristian Holmstrom, research project coordinator in the Vegetable Integrated Pest Management (IPM) Program at Rutgers New Jersey Agriculture Experiment Station, is a co-author of the study and provided New Jersey data. Holmstrom manages information from a network of blacklight insect survey traps on farms throughout the state that catch the European corn borer and corn earworm.

Field corn is grown mostly for grain production and animal feed. In Bt-field corn, the genetic modification donor organism is a naturally occurring soil bacterium, Bacillus thuringiensis, and the introduced gene produces a protein that kills Lepidoptera larvae, in particular, European corn borer (ECB). Growers use Bt corn as an alternative to spraying insecticides for control of European corn borer. 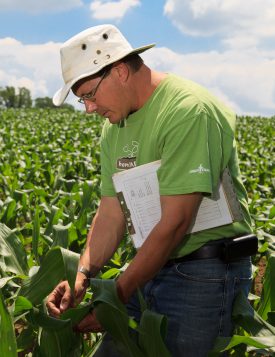 As the acreage of genetically engineered corn increased in the mid-Atlantic region, other crops that hadn’t been modified but were vulnerable to that pest became less threatened – particularly, bell peppers and green beans, both economically important to New Jersey agriculture.

Both European corn borer and corn earwom have broad feeding and migratory behaviors as economically important pests on many agricultural commodities. ECB is a major pest of green beans and peppers, and both insects are major pests of sweet corn. With New Jersey as a key pepper-producing state in the United States, these vegetable crops are economically important components of the farms in New Jersey and other Mid-Atlantic states.

Read more about the study at Rutgers Today.

Read the study in the Proceedings of the National Academy of Sciences.