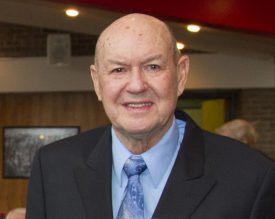 Daymon W. Thatch, 81 of Manasquan passed away December 16, 2017 at Ocean Medical Center, Brick with his wife Elizabeth at his side. Born in Chicago, Daymon was raised in Highland Park, NJ, and during his life resided in College Park, Md., Piscataway, NJ and since 2001, in Manasquan, NJ.

He received his undergraduate and graduate degrees at Rutgers University (CAES ’65 and GSNB ’66) and his Ph.D. from the University of Maryland in 1969, all in agricultural economics.

Thatch was a professor at Rutgers University for 32 years before retiring in 2001, and served as chair of the Department of Agricultural, Food and Resource Economics. He believed in the transformative power of education, and he continued to support and root for Rutgers until his final day.

Thatch’s love of family was evident to all who knew him and was a guiding force in his life. Beneath his more serious public persona, the beloved husband, father and grandfather was often playful and fun in his private life, and he reserved his silliest behavior for an opportunity to make a child laugh or a baby smile.