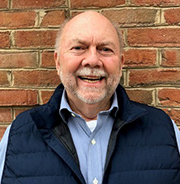 Robert C. (Bob) Mickel, agricultural and regional livestock agent for Rutgers Cooperative Extension (RCE) of Hunterdon County retired on November 1. Mickel began his career with Rutgers in 1987, serving as acting 4-H agent for RCE of Mercer County. After he received his master’s degree from Rutgers Graduate School-New Brunswick in 1989, he was hired by then extension director John Gerwig as the first regional livestock agent, serving Somerset, Hunterdon and Mercer counties, working out of the Rutgers Cooperative Extension office of Somerset County. In 1995 Mickel moved to the Sussex County extension office, adding Sussex County to his regional coverage. In 1998, Mickel moved to the Hunterdon County extension office, where he also served as the county extension department head.

Mickel designed and delivered multiple educational and training programs for producers and growers across the state. He developed many applied livestock research projects and collaborated with colleagues on research projects on field crops, pastures and forages, equine, small farm management and alternative livestock species. He received numerous state, regional, and national awards for his programming and research from the National Association of County Agricultural Agents (NACAA) and presented a number of posters and invited lectures at the association’s annual meetings. Mickel designed a number of programs for the 4-H youth development program, with the Lamb Carcass Evaluation program being held annually for 30 years. Mickel worked extensively with the New Jersey Beef Industry Council and was instrumental in the council’s formation in 1996 and the development and delivery of the state’s Beef Quality Assurance Training Program. He also served as the council’s only executive director.

In one of the first regional extension based delivery systems, Mickel worked with colleagues at Rutgers and Penn State to develop the Penn-Jersey Extension Partnership, where five agents from Pennsylvania and New Jersey on the northern borders of the Delaware River, for over fifteen years, conducted winter meetings, field days, twilight meetings and demonstrations with support from specialists in both states. Mickel, along with the members of the Penn Jersey Partnership served the regional growers by developing extensive educational programs such as the Crop Master six-week training program and website for farmers and crop consultants in Northeast New Jersey and Eastern Pennsylvania featuring crop information for forages, soybeans, corn, and small grains. Mickel was instrumental with the Penn-Jersey Partnership in developing the Northeast Small Farm Expo and Trade Show, a cooperative effort for eight years between Rutgers, Penn State and Cornell, creating an annual two-day educational program for regional and national growers implementing multiple production systems, to interface with industry, producers and extension professionals. Among his many awards Mickel and the Penn Jersey team were awarded the “Educators of the Year” award by Pennsylvania Association for Sustainable Agriculture in 2001 and he was also awarded the NACAA Distinguished Service Award in 2004.

This past February, Mickel and colleagues were awarded as “Educators of the Year” in recognition of their long-standing contributions to the Junior Breeder’s Livestock Symposium, which was presented at the 2017 annual awards program of the New Jersey Association of 4-H Agents.

Mickel’s colleague Stephen Komar, Sussex County agricultural and resource management agent, commented, “Bob Mickel’s career can be summed up with one word, “service.” Although he is an outstanding professor, researcher and loyal colleague, Bob’s career exemplified the mission of the Cooperative Extension Service, spending countless hours serving the agricultural community through his educational outreach, one-on-one consultations and award winning Extension programming. His expertise and work ethic will be truly missed. I wish him and his lovely wife, Evelyn many years of health, wealth and happiness.”

During his retirement, Mickel will continue working with the New Jersey Beef Industry Council and plans to pursue beef projects that he’s had on the back burner for a few years. Bob is looking forward to more time with his wife Evelyn of 43 years and spending time with their four grandchildren.

Reflecting on his Rutgers career, Mickel commented, “As a county agricultural agent for 31 years it has been my pleasure to work for and with the growers and producers across both the counties I served and across the entire state. Providing extension programs, training and educational guidance for beef, livestock (sheep-goats-poultry), dairy, equine, newer animal species producers and field crop and forage growers has been extremely rewarding for me, as you witness their successes derived from your talent, expertise, and guidance. Having the respect across the entire New Jersey agricultural community and from other state and federal agencies for what you achieved and stood for, has made the job of county agricultural agent a most rewarding career and don’t tell the college, even “fun!” Being recognized for your work by professional organizations and your peers has also added a rewarding dimension of achievement for all the long hours and work you put into your job. I have made many lifelong friends during my tenure and will continue to enjoy their friendship. As an educator we must never forget our mission, utmost pride, and enjoyment that comes when we see the light of knowledge go on in both our youth and adult students. A last note – early on in my career I was presented a print of the “County Agent” done by Norman Rockwell that became my vision of what truly exemplifies the role of a county agent! Remember a picture is worth a thousand words.”