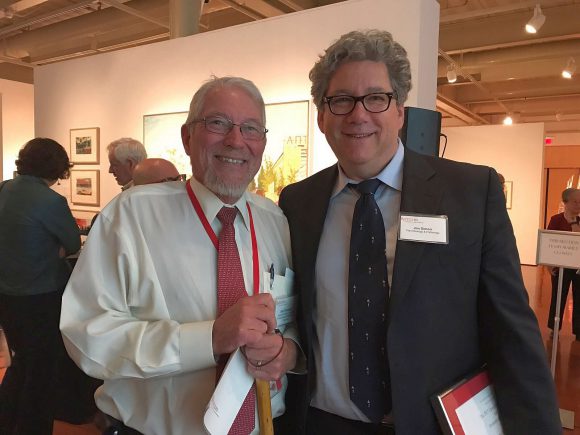 At left, Executive Dean of the School of Environmental and Biological Sciences Robert Goodman is pictured with James “Jim” Simon at the Chancellor’s Celebration of Faculty Excellence on Oct. 17.

James “Jim” Simon, distinguished professor in the Department of Plant Biology, was awarded “The 2017 Chancellor’s Award for International Impact” at the Chancellor’s Celebration of Faculty Excellence on October 17. Chancellor of Rutgers–New Brunswick, Debasish “Deba” Dutta, presented Simon with a plaque “in recognition of his more than twenty-five years of collaborative research in sub-Saharan Africa and his unrivaled contributions to international agriculture and rural development, which uses innovative and transformative approaches to provide individuals and communities with the tools to achieve economic independence.” 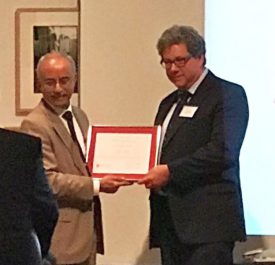 A global researcher, Simon knows a lot about doing agricultural research and training work in Africa. In 1994, he began collaborating on multiple agricultural research projects in sub-Saharan Africa and initiated several small-scale farming initiatives that are bearing fruit today. He has partnered with groups in the Cameroon, Ghana, Kenya, Liberia, Madagascar, Malawi, Namibia, Rwanda, Senegal, South Africa, Tanzania and Zambia. In concert with his African colleagues, Simon has trained a wide range of rural small-scale farmers, including some of the most impoverished communities and with no prior experience in raising for commercial purposes. He also helped them to create markets for their fresh produce by connecting them to the high-end hotels nearby; access to other markets have followed suit.

Since 2000, Simon has led Rutgers’ New Use Agriculture and Natural Plant Products Program, focusing on the development of new uses of traditional crops, new crop, aromatic and medicinal plant domestication, with a specialization in natural products such as those containing extractable chemicals for flavor, aroma and medicinal activity.

In addition, he works cooperatively with research groups around the world and in New Jersey, seeking to develop standardized botanical products for health and nutrition. His research projects focus on culinary herbs (selection and breeding), Asian and African botanicals and medicinal plants, the nutraceutical components in fruits and vegetables, and quality control for herbs and botanical products.

He is internationally recognized for his work in horticulture, medicinal and aromatic plants in which he specializes in plant natural products and new crops. For his wide ranging research and outreach activities, he’s been recognized with multiple awards. In 2014, he won the Association for International Agriculture and Rural Development Special Service Award in recognition of his collaborative research in sub-Saharan Africa and elsewhere, and his ability to use innovative and transformative approaches that lift people out of poverty. In 2012, he was awarded a Scientific Excellence Award by the Board for International Food and Agricultural Development for “his significant contributions to improving horticultural crops across the value-chain in several African countries,” through the USAID Horticultural Collaborative Support Research Program.

Simon’s long-standing commitment in international research and commitment to Rutgers contributing to addressing global issues is also noted by his involvement in Liberia, where he and his team just concluded a seven-year project in which Rutgers had a leading role in reshaping and forming the new and improved College of Engineering at University of Liberia and the College of Agriculture and Sustainable Development at Cuttington University. Additional examples of his international impact include him serving as a Past President of the Liberian Studies Association and him leading the Rutgers community’s all-volunteer effort to provide assistance during the Ebola crisis in Liberia. That effort led to the shipment of tons of emergency medical supplies by Rutgers to university collaborators on the ground in Liberia, ensuring that the critically needed supplies reached local doctors, nurses and emergency workers at medical centers attached to partner institutions, in particular the JFK hospital at the University of Liberia and the Agave teaching clinic at Cuttington College.

Simon is deeply engaged in a number of multi-and cross-disciplinary activities, including being the founding member and associate director of the Rutgers Center for Sensory Sciences & Innovation, serving as an associate director of sustainable development for the Global Institute for BioExploration and a member of the executive committee of the Rutgers Center for African Studies. He has published over 300 scientific papers, books, reports and reviews in the areas of new crops, aromatic and medicinal plants, and nutraceuticals. His undergraduate classes on medicinal plants and ethnobotany are popular and have drawn multiple students into international work.